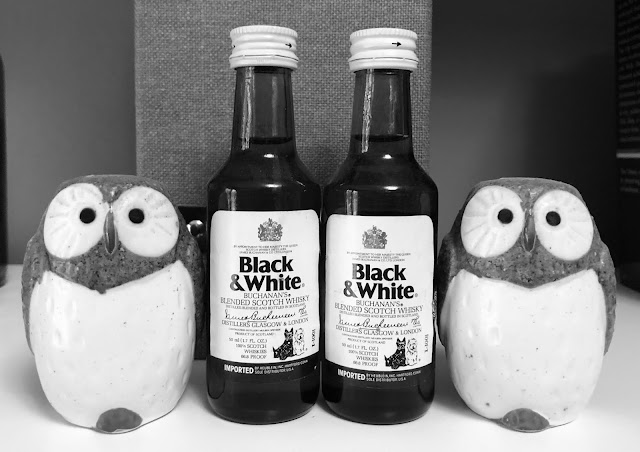 Neither of these mini bottles show even a hint of a tax stamp, yet their alcohol volume is still measured in proof. That would put their bottling after 1985, but before 1990.

One important observation. Whitey looks a lot happier on these '80s bottles: 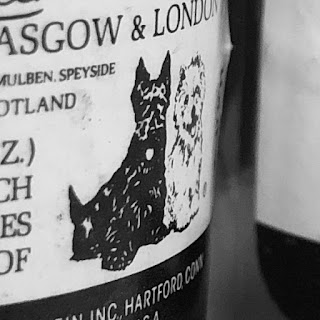 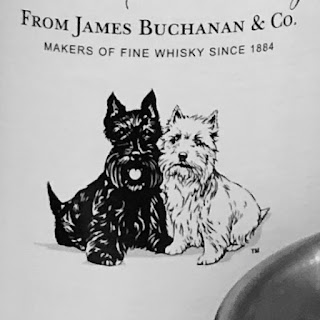 Is that loyal pup trying to tell us something?

NEAT
Oh, the nose is fruity! Peaches, apricots, roses, grapefruit and sour apple candies. There are also moments of toasted grains and yeast. The fruit trends more towards a flower blossom note with time. The palate is much simpler than the nose. It's mostly tart citrus, jalapeño oil and toasted nuts with hints of wheat and barley. Straightforward, spirit-forward. Not much going on in the finish. Soft pepperiness and herbal bitterness. A slight BBQ smoke note.

ON THE ROCKS
The nose's fruits and flowers are gone, replaced by caramel, maple syrup and young malt whisky. The inoffensive palate is mildly sweet and very reminiscent of Glenfiddich 12yo.

WORDS WORDS WORDS
As with all the other Black & Whites I'm reviewing this month, I tried this whisky alongside the 2018 version. This one is certainly a step up from the current B&W, but not much more than that. Yet, once again, I find no connecting threads between the two eras. They feel like very different whiskies produced from different recipes. Perhaps the ingredients are similar, but older, and with greater emphasis on malt whisky. While the nose is quite pretty, the palate is......agreeable. Nothing off. Nothing on. It wouldn't surprise me if this late '80s mix is similar to the version of Black & White I first tried nearly two decades ago.