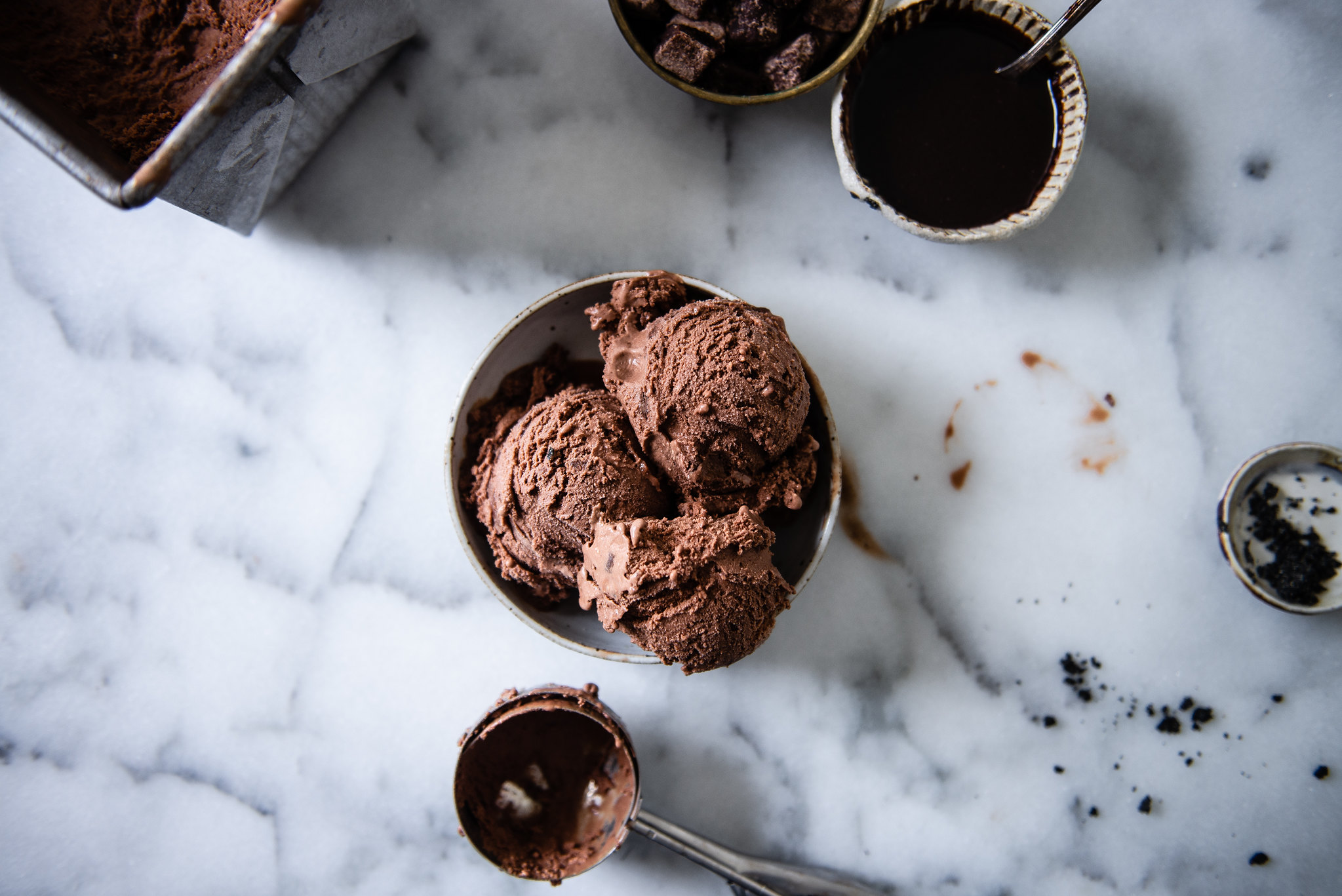 This ice cream owes its existence to a younger and more foolish me, who once had what she thought was a genius idea, oh, you always eat brownies way too quickly, maybe if you freeze them, you’ll eat them slower, and who then found frozen brownies to be the best thing she had ever encountered and ate them all the live long day until she became the me of today: older, wiser, and significantly more full of brownies.

There’s just something magical that happens to brownies in the freezer–especially the underdone variety–because what was once gooey and molten at room temperature isn’t rock hard when frozen, but fantastically chewy, a little less sweet than when warm, which gives it a deeper, more pronounced chocolate flavor. So when, the other day, I was looking for a good, classic creamy chocolate ice cream–it seems like it shouldn’t be as hard to buy from a supermarket as it has been!–and decided to make one from scratch, obviously brownie bite ice cream it was.

I wanted the darkest, chocolatiest ice cream I could find, and so naturally Jeni’s was the one that ended up being exactly what I wanted–as usual, her recipes require no eggs, which is already a major plus in my book, but despite that they turn out magically fluffy, light, and scoopable, with a purer and deeper flavor on an egg-free canvas.

Jeni’s recipe requires two types of chocolate, which you’d think would be enough if you were anyone other than me, but here is where I got a litle distracted. On the way to brownie ice cream we took a slight detour and ended up at mochi brownie bits. I can’t say I’m sorry. Chocolate mochi at room temperature has even more of that tender, pillow-like lightness that makes it chewy and delicious frozen. Chocolate makes my typical mochi recipe a bit less pliable than usual and a bit more tender, but as frozen it made no difference, and the contrast between the dark, chewy mochi bits and sweet chocolate ice cream (Jeni’s, who else) was just what we were looking for.

Finally (since I was off the rails anyway) I decided to gild the lily with black sesame fudge sauce, which adds a dark, bitter toastiness that compliments the chocolate in the best way (a flavor combination I’ve been smitten with ever since this loaf in my cookbook). But you can be reasonable and just have it as is–in these dog days of summer, it is perfect either way.

Chocolate ice cream base based on the inimitable Jeni’s, which I love because it lets you skip all the coddling of an egg-based ice cream, yet never fails to yield a dreamily fluffy, scoopable ice cream.  Fudge sauce based on Smitten Kitchen.

For the chocolate mochi bits:

For the ice cream:

For the black sesame fudge sauce: