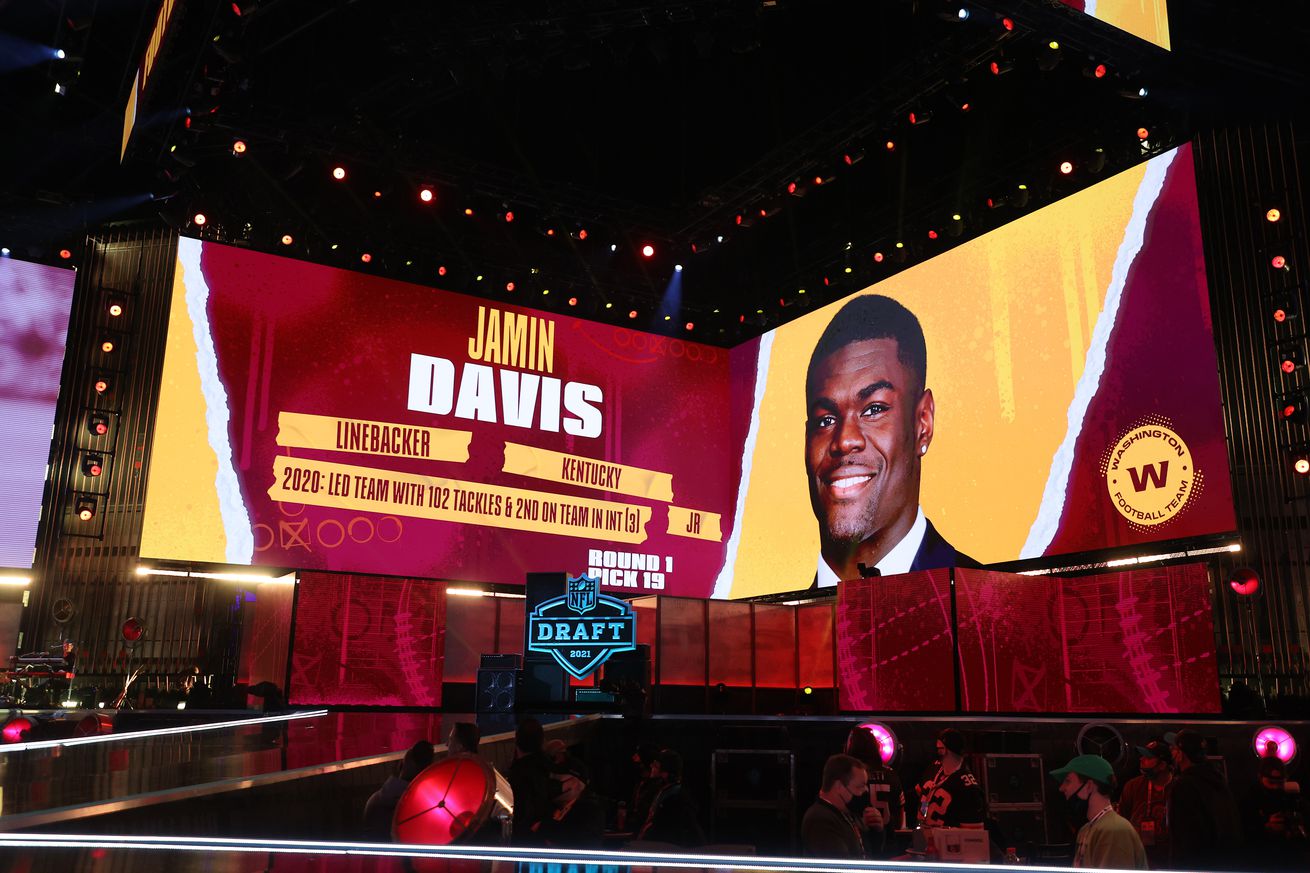 Jamin Davis Presser: “How soon can I get started?”

Jamin Davis has arrived in Washington and was immediately thrown in front of a mic and a Zoom-full of reporters. Ron Rivera joined the presser to introduce Davis to the world. Davis said he felt a kinship Rivera due to him being a LB in the NFL, and having a similar military background. Rivera also mentioned this connection in his presser last night. Davis said his heart dropped when he got the call from Rivera and he thought it was a joke at first. After the call, the moment hit him when he hugged his mother, and he realized his dream had come true.

Davis said he is ready to work right away, and he doesn’t believe in taking reps off in anything that he does. You never know when this will be your last play, so he goes 100% all the time. Davis flies around the field, and he liked seeing that same intensity from Washington’s defense in their playoff game against the Tampa Bay Buccaneers last season. He is not worried about where he plays in this defense, he just wants to get on the field and make plays.

The Zoom presser starts with a surprise appearance from Ron Rivera. He wanted to introduce the first-round pick.

Davis said he felt a sort of kinship with Rivera since he also comes from a military background and has the same high standards. That lets him know he is playing for the right team.

Rivera played LB and grew up in a military family.

Davis plays LB and grew up in a military family.

Those similarities make Davis feel like he joined the right organization and the right coaching staff.

Jamin Davis has picked his number and his jersey is now available! https://t.co/cQUVqdj08Z

Rivera starts the press conference with some opening remarks about Jamin Davis. Davis will be wearing #52.

Davis: "Growing up, one of my favorite numbers was 25. So I just flipped it around." https://t.co/G1rb4zikZc

Flying around the field:

Davis know he is coming into a defense that likes to fly around the field. That's a quality he also prizes in himself, saying he likes to always be around the ball.

Never take a rep off:

Davis doesn't believe you should take a rep off, whether it's on the field or in the weight room. You never know when your last snap will be, so why wouldn't you give 100%?

LB Jamin Davis on how he felt when he got the call from Ron Rivera: "My heart dropped immediately. I thought it was a joke."

After getting off the phone with Ron, Jamin Davis tried "to be a tough guy at first, but then the tears started fallin."

That's me during any Pixar movie

There was a whole lot of emotion going through him after he touched down in Ashburn this morning. He's ready to work.

Davis wants to learn everything he can and get thrown into the fire. One of the first things he asked Rivera was "How soon can I get started?"

Jamin Davis said these past 12 hours have been "nonstop" with messages from family and friends. He's flattered but also is trying to stay grounded.

Jamin Davis said he doesn't model his game after anyone, but is a fan of Devin White and Darius Leonard.

Position in the defense:

Rivera said Davis can play in any linebacker spot. As far as where he will play, Davis doesn't care. He's just ready to work and be a contributor for Washington's defense.

LB Jamin Davis said he got out of the shower this morning to see one his heroes growing up, NASCAR driver Jimmie Johnson, had tweeted at him. That and a note from fellow driver and big WFT driver Dale Earnhardt Jr. were moments he felt starstruck.

Jamin Davis said he watched @WashingtonNFL a little bit last year. He thinks it was the playoff game, and he noticed how players like Chase Young were flying around.

Davis got a chance to watch Washington's defense last year, so he has an idea of what it can do. He remembers watching how guys like Chase Young were being vocal leaders and flying around the field. After seeing that, he thought it would be fun to be part of that.

.@jamindavis25 on watching the WFT's defense: "Just watching how guys like @youngchase907 were flying around and just being a vocal leader and making plays all over the field, of course. That's something that I wouldn't mind stepping into and trying to do the same exact thing."

"I love everything about it here so far."

LB Jamin Davis said it doesn't matter about high school rankings (he was a three-star recruit) or where you're drafted.

It's all about seizing the opportunity and making a name for yourself.

Jamin Davis Presser: “How soon can I get started?”