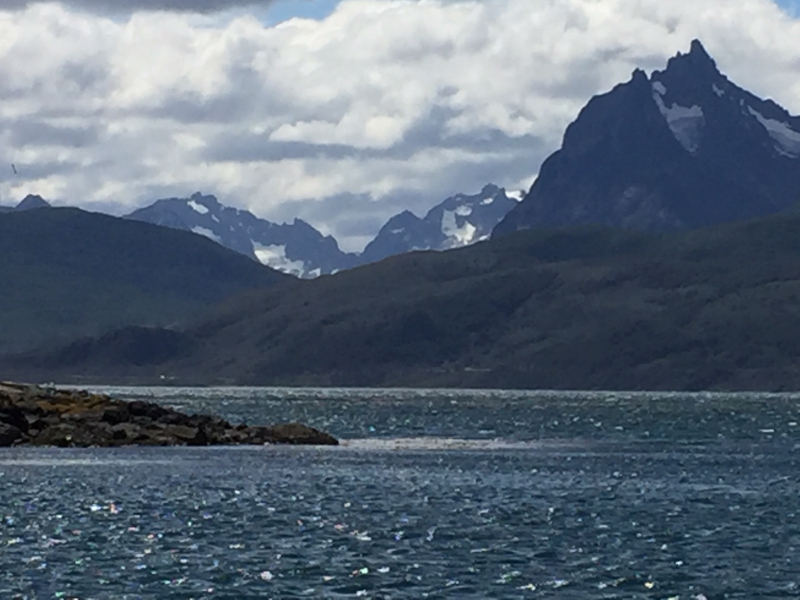 I've already blogged about our cruise to Antarctica , but as I mentioned there, we visited other interesting places as well. (The picture above is from sailing into Ushuaia, in Tierra del Fuego.)

It was pleasant sunny summer in Argentina and Buenos Aires was beautiful--a city of trees and sweeping boulevards. One of the largest cities in Latin America and a major port, it's cosmopolitan and multi-ethnic and has been called the Paris of Latin America.

Here is the view from the window of the 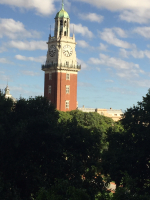 hotel where we stayed for two nights. We tried the tasting menu in the hotel's excellent restaurant and one course was octopus. I approached it warily, and for the first time I experienced octopus as something that wasn't like chewing on a piece of rubber tire. <G>

La Boca is a colorful neighborhood by the port, originally settled by Italians but with other groups settling there to create a melting pot rather like New York's Lower East 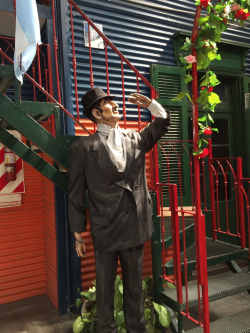 . Like the US and Canada in North America, Argentina has been the destination of large numbers of immigrants who have enriched their new homes in many ways.

The original old houses of La Boca were made of corrugated iron and painted in bright colors that were left over from the shipyards where a lot of the residents worked. It's said that the tango originated here, and here's a statue of a tango dancer coming to collect a lady for the dance.

On our return to Buenos Aires, we had a long day to kill between exiting the ship and flying home. (Most flights to the US leave late at night.) The cruise line offered a couple of excursions to keep us out of trouble till our departure, and we chose one that gave us an overview of the city and then took us out to the country to visit an estancia (ranch.) We were greeted by a gaucho on horseback and fed delicious little empanadas 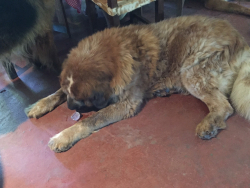 HUGE platters of food. There were a lot of things on offer, and the slices of grilled meat covered more than half a plate. I passed on that, but there were plenty of other good things. There were also very large but very well behaved dogs wandering around, not begging but looking hopeful.

"The Land of Fire." The southernmost tip of Argentina, it contains Ushaia, often used as a jumping off point for the Antarctic. Here's a picture of an expedition ship moored on the opposite 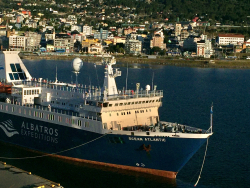 side of our pier. I took this from our balcony, so you can get some sense of the difference in size! I imagine the passengers on this ship would actually go ashore on Antarctica so they would need a lot more cold weather gear. While I watched, a coach deposited a group of passengers who looked rather jet lagged but very fit. <G>

We sailed on the Celebrity Eclipse. Usually I prefer small ships but the Eclipse was a credit to large ships, with wonderful service and great 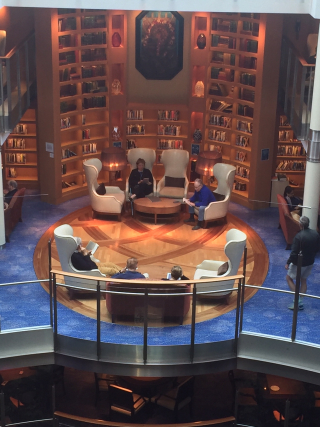 food. I loved the ship's library. It was visible from the elevator and always made me think of Harry Potter and Hogwarts. <G>  The sweet treats on the right are a small portion of the desserts in the buffet restaurant. 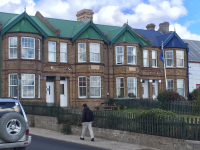 We loved the Falklands, which were very reminiscent of Shetland, the far northern islands of Great Britain. The green hills were windy and very short of trees, but not without sheep. <G> I liked the Penguin Tourist bus, whose

destination was obvious, and this group of houses by the port in Stanley looked exactly like streets I've seen in England.

Montevideo is on the eastern side of the vast estuary of the Rio de la Plata and looks across to Buenos Aires. Another beautiful city, it is rated as having the best quality of life of any city in Latin America. I loved La Caretta, the bronze monument below that depicts the carts and oxen of early setters. Apparently many of the ox cart drivers supporters of Artigas, considered the liberator of Uruguay.

Have you visited anywhere in Latin America?  What have you seen there, and what would you like to see?  I want to see a lot more of our neighbors to the south! 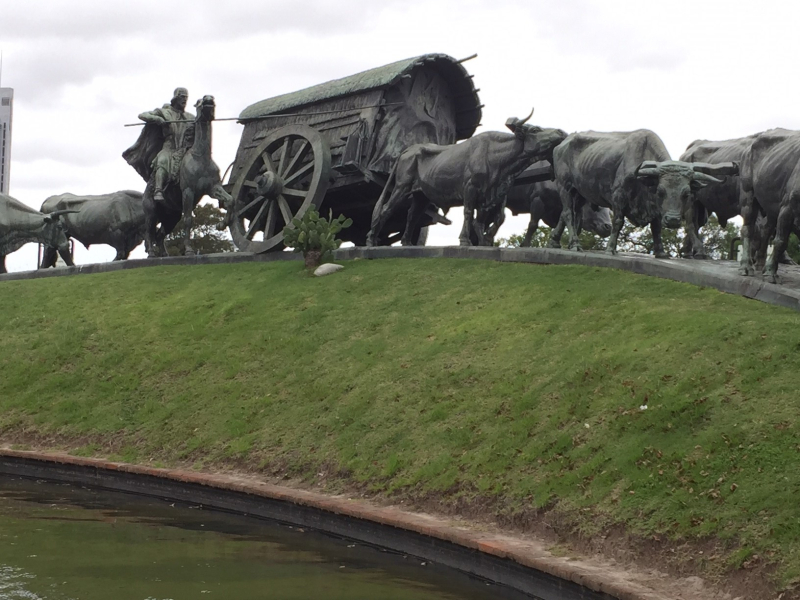