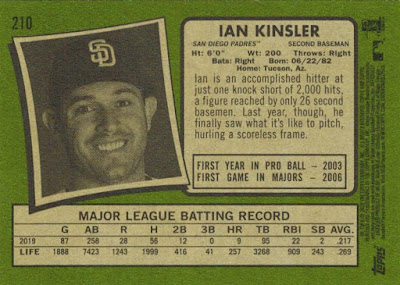 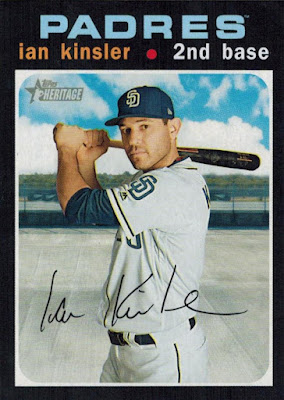 This post, whenever I hit Publish, will be the 2,000th in the history of "Dime Boxes," and I'm using it to honor...Ian Kinsler?

I'm not sure I've mentioned Ian Kinsler even once in the first 1,999 posts I've written. He retired from the game this past offseason and managed to become one of those guys who hung around baseball for a good long while (14 years) without ever really approaching stardom. And while Kinsler's good enough to be a "binder guy" in my collection, I don't chase his cards with anything near urgency outside of the few Short Term Stops he had near the end of his career. So why the sudden interest?

But as I was poking around some stat sites last night (a common evening activity for me), I discovered something that could only be described as serendipitous.

I discovered that Ian Kinsler retired with exactly 1,999 career hits.

I didn't quite believe it when I first read it, and I had to go get one of Kinsler's 2020 baseball cards (with complete career stats!) to confirm the strange fact. But there it was, clear as day: 1,999 career hits. On the eve of my 2,000th post, I discovered Ian Kinsler and his 1,999 hits. Weird.

Baseball stats are sometimes exciting and sometimes painful, and the latter is no doubt true with Ian Kinsler. To think, if he hit just one more ground ball just a little harder across the infield, or perhaps if the rain in a shortened game would've just held off a little longer -- if any of those (or the infinitely other possibilities) had happened just once during his 14-year career, Kinsler would have that 2,000th hit. But the reality is that 1,999. And while 1,999 career hits certainly isn't anything to sneeze at, it just makes the guy's career seem...incomplete, somehow. 1,999.

Ian Kinsler became Mr. 1,999. So when I publish this post and hit the little Publish button at the top of my screen, I'll turn that despairing number ending in all those 9s into a happy round one: 2,000. I'd like to thank all my readers who've helped me get this far over my eight-and-a-half years around here -- I wouldn't have come anywhere close to this milestone without your support, readership, and overall good vibes. I offer my most sincere and heartfelt gratitude.

And so Dime Boxes, unlike Ian Kinsler, flips the page to #2,000...and counting.
Source: baseballdimebox