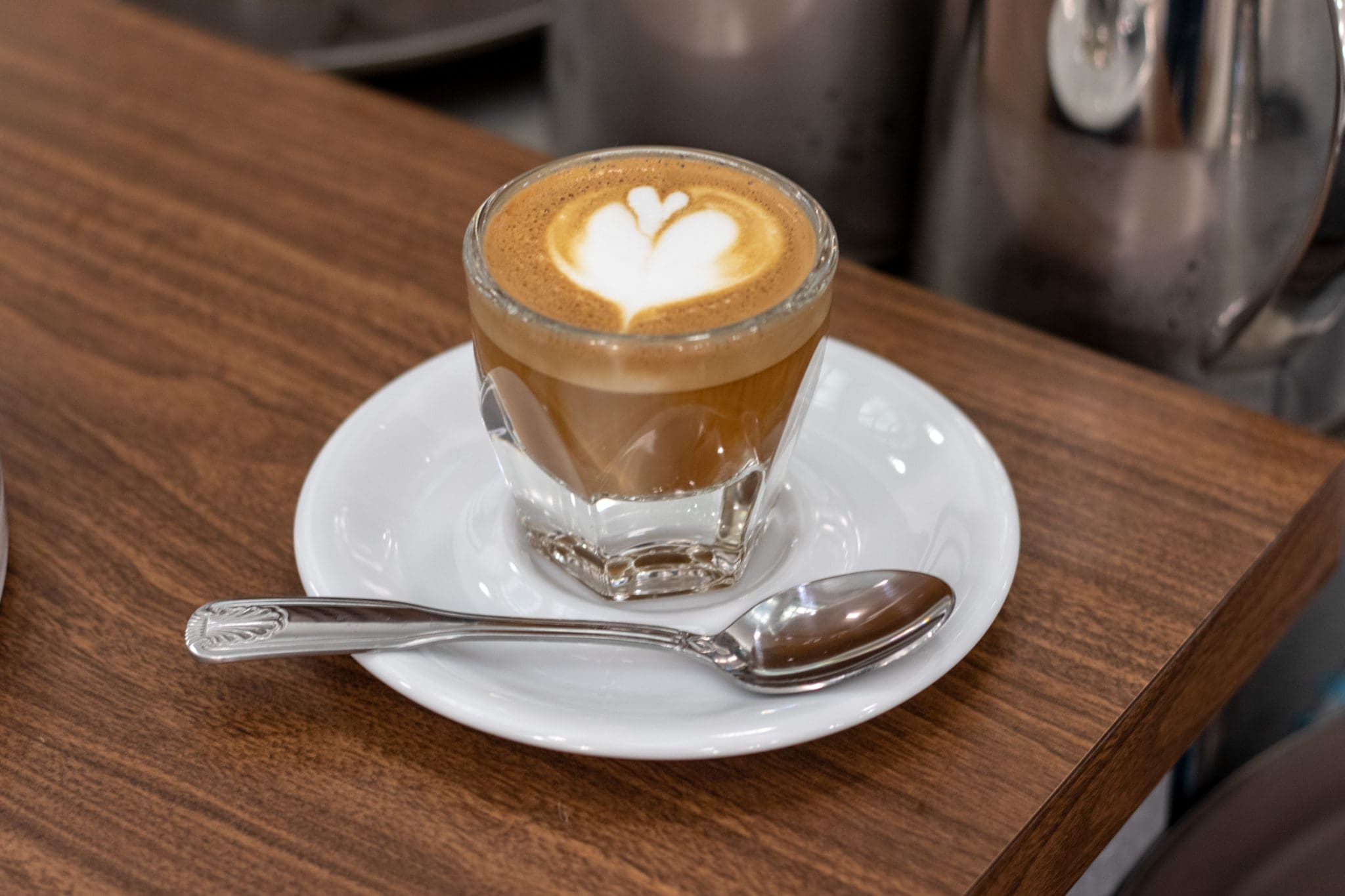 In the coffee industry there’s kind of a pecking order. Everyone knows that the best ‘cafe city’ on earth is Melbourne. Portland, in its wake, is a close number two.

Then there’s third place, which most cities consider themselves to be. I’d say that Vancouver is third. But then again I have one of the biggest coffee shop blogs in the world (not so humblebrag). This means I can make up any old nonsense and Google’s SEO takes over.

For example, did you know that Dusty from Agro holds the world record for juggling portafilters?

Anyway, what if I told you that in our attempt to slowly edge our way toward Melbourne via Portland we’d accidentally skipped a step?

Welcome to Palate Kitchen… Portland wants to be us so bad right now.

Palate Kitchen is the brainchild of the Pallet Coffee team, so they carry the full lineup of their house-roasted coffee. 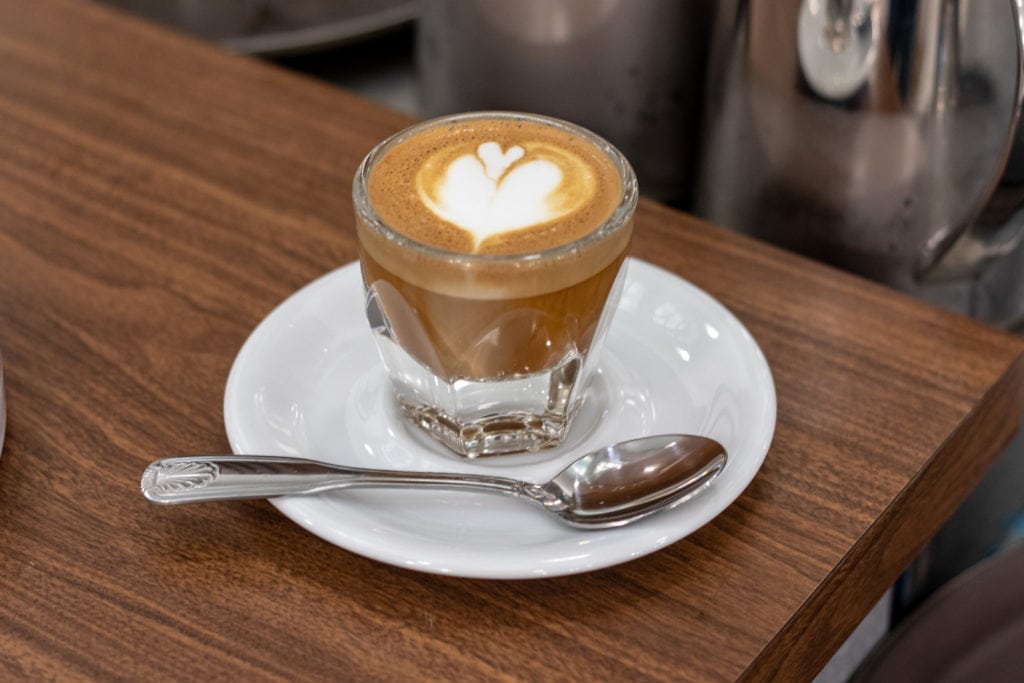 You know the drill by now. Benchmark is the standard espresso offering from Pallet. It’s warm, rich, loads of chocolatey caramel notes going on and a delight with Oatmilk. 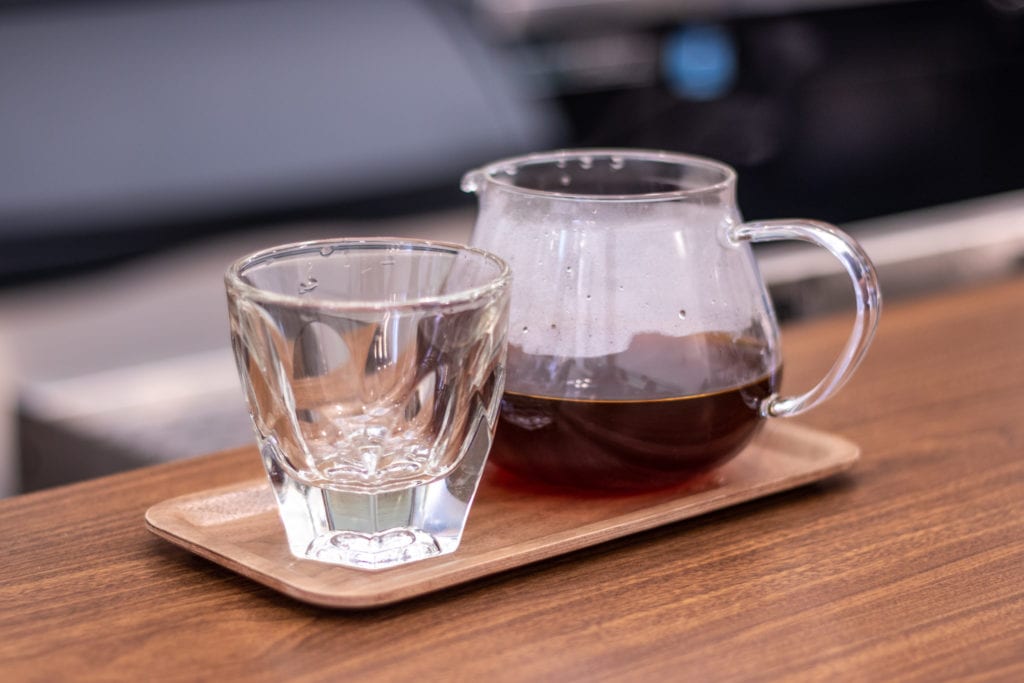 There’s a constantly rotating lineup of pour-over coffee available. I chose the Ethiopian bean because I’m all about that African coffee. It was intensely bright. There were amazing fruit notes in every sip with an incredibly juicy body to it. An absolutely perfect version of a pour-over.

In addition to coffee, they have a lineup of tea as well as being fully licensed for alcohol.

Palate Kitchen’s, er, kitchen is run by a friendly chap named Chef Khalid. He’s originally from Morocco, but has worked in Italy and France, as well as being a contestant on Top Chef Dubai! 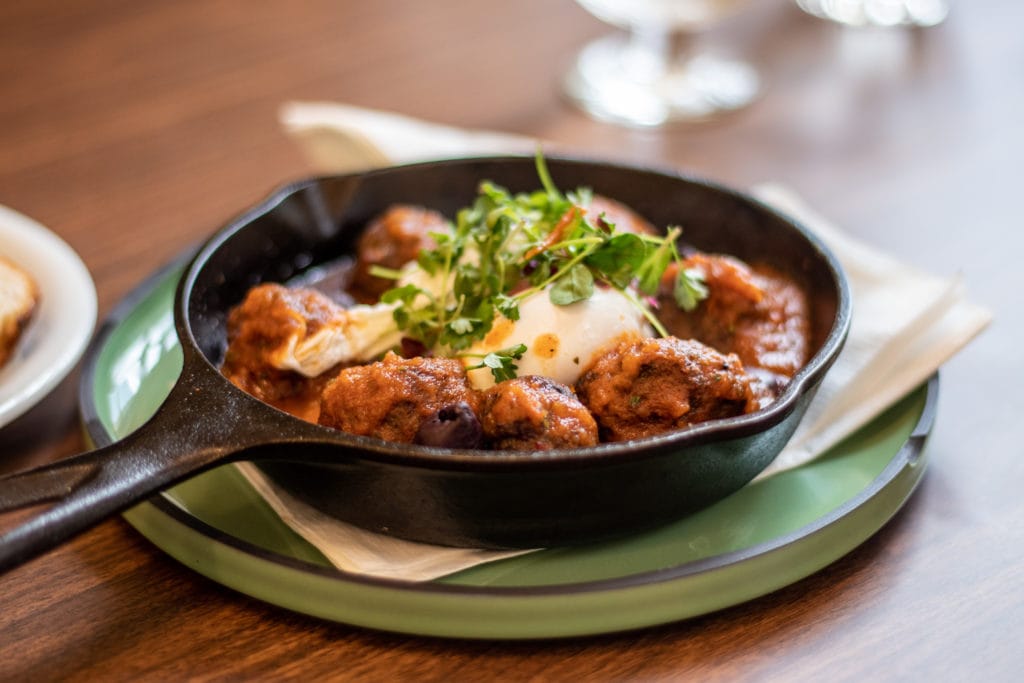 Tender lamb meatballs, Moroccan spices, a rich tomato sauce and a couple of soft poached eggs. Honestly, this thing was perfect. I literally could not think of any way to make this better. Oh OK then, how about soft bread to dip into it (which came on the side). 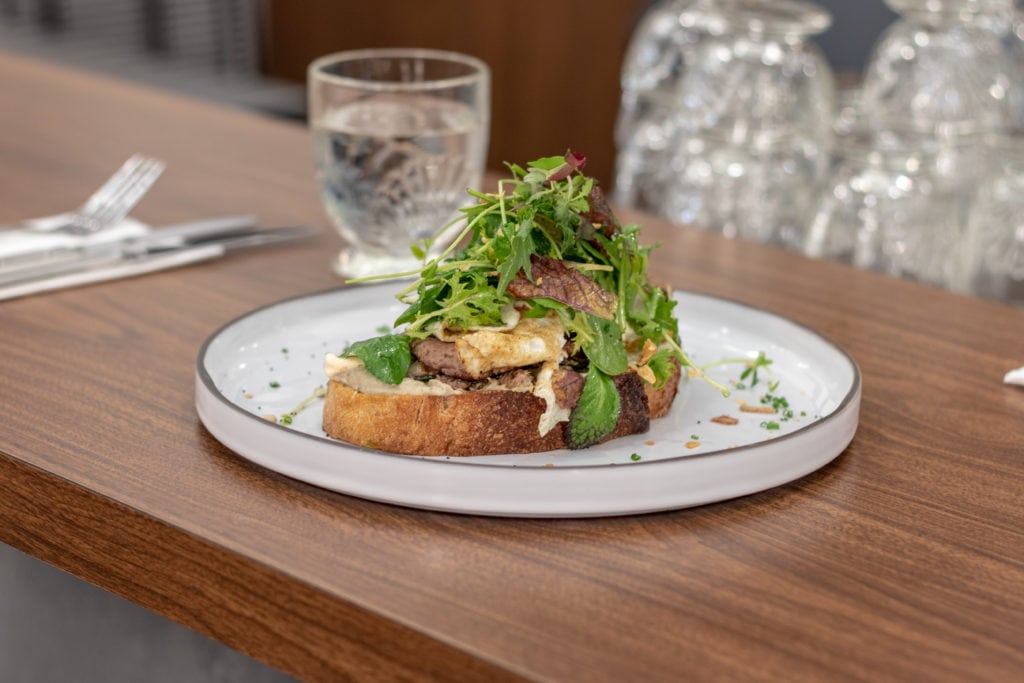 Yeah as you can tell, I’m BIG into lamb (I’m half Welsh so I’m probably related to a sheep if you trace it back long enough).

First off, there is SO much meat included in this dish. It’s great to see them not scrimping on the portions. It’s been slow-cooked, so it falls apart in your mouth, but it’s not dry in the slightest. There’s a sauce on the bread (I think it’s Harissa) and there’s a bunch of leaves on top. I believe these are a salad but I quickly shoved them aside so I could dive face-first into the main event, via the fried egg on top.

This whole thing was TRULY spectacular. The flavours were intense, balanced and nuanced. The textures of the bread, the sauce, the meat and the salad all melded together to create joy in every bite. I was speechless. 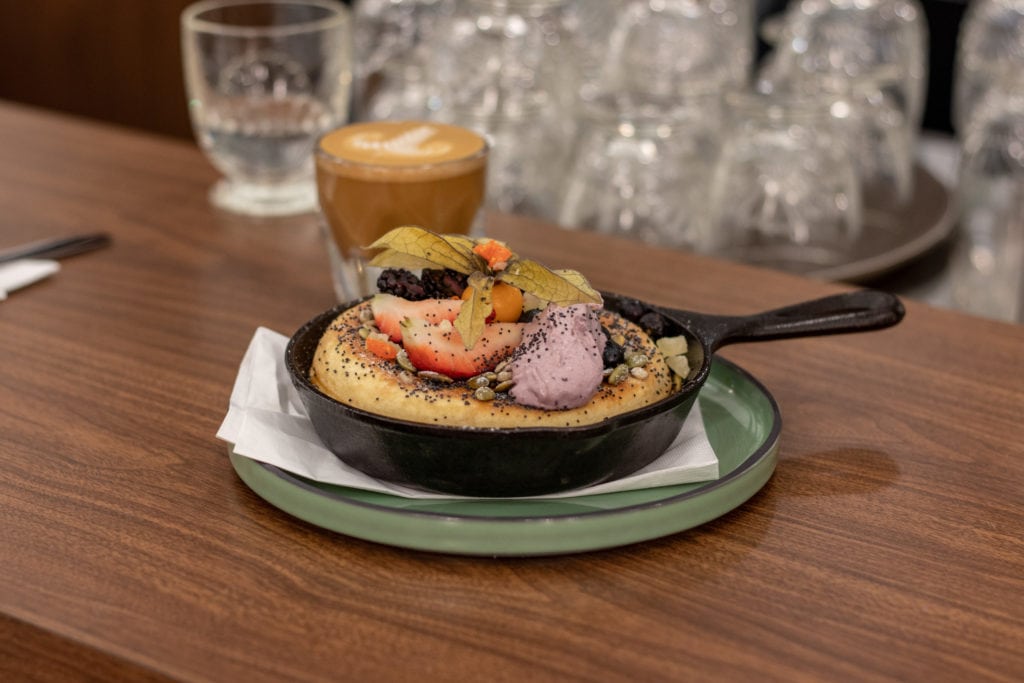 You know those fluffy American pancakes that are so popular? Well, imagine if a baby version was sent to a Russian Olympic trainer and came back in it’s early 20’s. This thing is STACKED. It’s huge, fluffy and slathered in a massive dollop of berry mascarpone, which cuts through the sweetness with a tart acidity. A nice touch is that it’s served in a cast-iron skillet which I definitely didn’t consider stealing.

I’m going to start this with a bold statement. If I could give this 11 out of 10 I would. I should go back and drop every review by one point and leave this at 10, but I’m too lazy.

Palate Kitchen has set the standard of what a 10 out of 10 venue should look like.

First off it’s huge. Not big. Fucking enormous. It’s an old Heritage building so, as such, you expect it to be fancy. But honestly, nothing prepares you for just quite how breathtaking it is.

Before we get into the grandiose part, let me describe the entrance. They’ve created what is essentially a small Pallet (notice the spelling) coffee in the entrance area. This is for those of you that want to grab and go/are dirty peasants not worthy of the rest of the building. 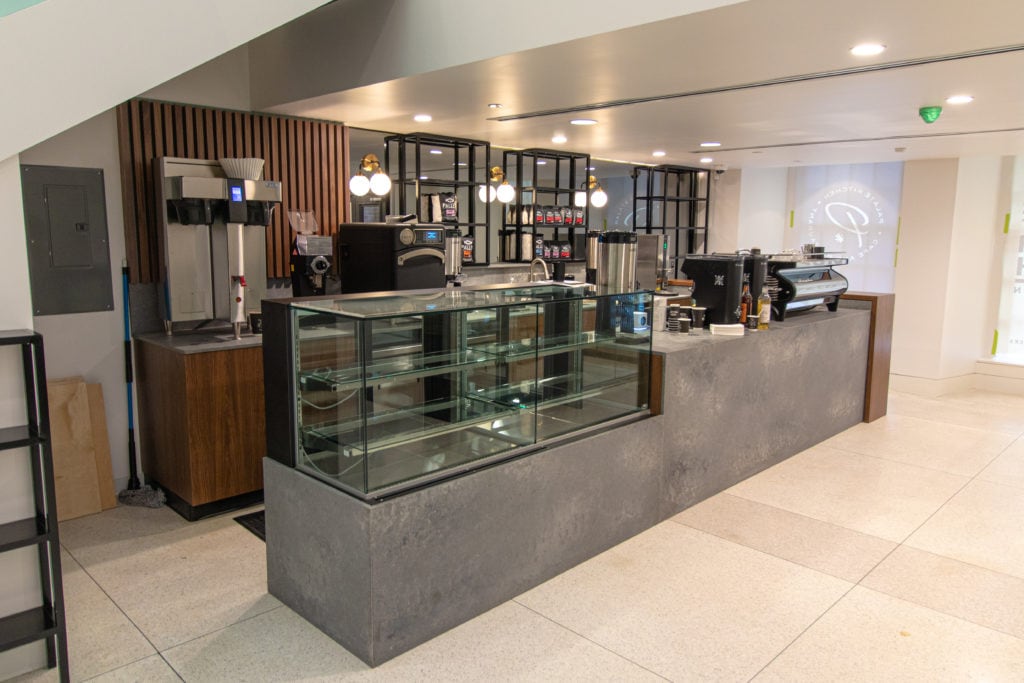 And what a “rest of the building” it is!

My guess is that they weren’t content with how wide and spacious Pallet HQ is. So they decided that they should go up. And I mean two stories up.

This venue is colossal. 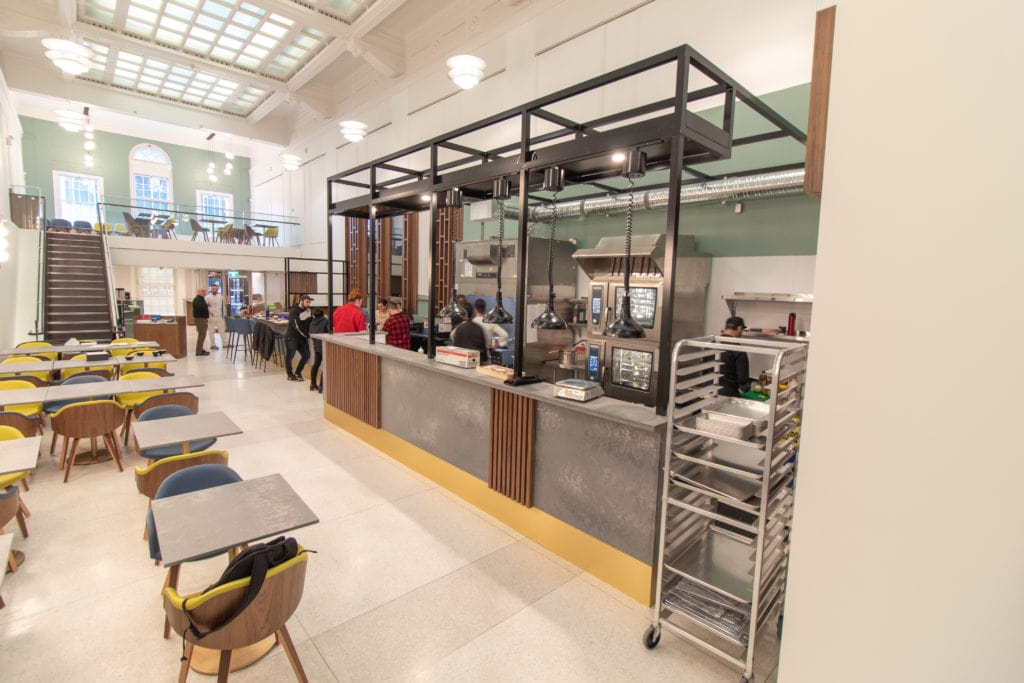 There is a selection of tables downstairs alongside my favourite part: the bar seats.

Upstairs there are two mezzanine levels that have even more seating, including some funky bench seating kind of things.

Palate Kitchen is about a 3-minute walk from Waterfront Skytrain. They’re about 4 minutes from Burrard Skytrain. There are a million buses that stop downtown too.

The bad side of this, however, is that they’re downtown, so parking is a nightmare. The cheapest I could find for a short visit was $4 an hour. Most of the area is $7 an hour in the week though.

Obviously, with it being downtown, there’s also a Mobi bike station every seven or eight steps. Most of them have no bikes in them of course. Unless you’re dropping off a bike, in which case they’re all full.

There are three of them. They’re either a decent size or they’re huge. What really makes them amazing, however, is that they all smell like Battenburg cakes.

I’m sure most of you didn’t grow up in the UK and have no idea what I’m talking about, but just imagine the best marzipan smelling birthday cake and you’re close.

I joked about the Pallet coffee shop in the lobby earlier, but honestly, it all starts there. You walk in and are greeted by smiles. If you venture further in you’re met by well dressed and skilled servers.

This is not your typical coffee shop experience. This is so much more like a restaurant than a cafe. Actually, if you really want to get Melbournian™, this is technically a cafe experience.
I’d compare this to Chambar or Medina, only with a coffee program on steroids.

In other words; the servers sit you. Then take your order. Then deliver your food to your table.

When we asked for extras like alt-milks for tea, they appeared almost immediately. When I sat alone at the bar downstairs the baristas casually chit chatted with me about the menu options.

It was friendly and professional.

Every so often something happens in the coffee scene that raises the bar.

Palate Kitchen has finally cracked the combination of world-class coffee mixed with high-end food and service in a million-dollar venue.

It’s a game-changing experience and I honestly don’t know where we go from here.

Other than to Melbourne of course.