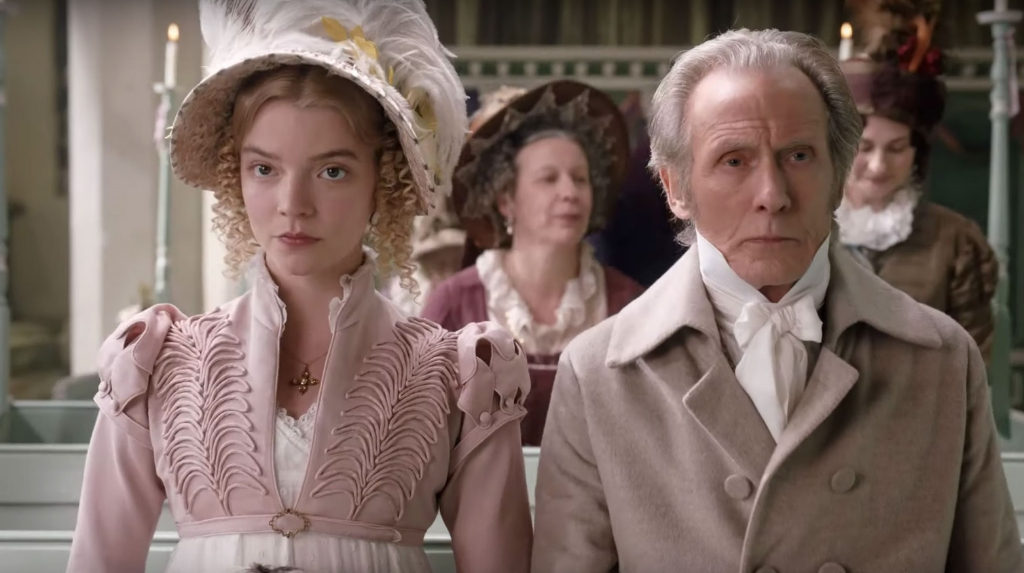 The very short list of good things resulting from this pandemic are people making their own bread, more time to read, and the new adaptation of Emma being released to stream in your living room.

Yes, dear reader, Universal has heard your cries for Jane Austen and if you didn’t see it the movie theatre before they closed, you don’t have to wait for this viral outbreak to be over to watch Emma.

(It’s available soon–probably Friday, March 20th. And you can already pre-order to stream it. This is my Amazon affiliate link to pre-order it now.)

We truly deserve a good Austen adaptation after the trainwreck that was Sanditon.

(May Miss Austen be forever protected from Andrew Davies who gets pervier with each passing year.)

Thankfully, we got something rather wonderful in Autumn de Wilde’s Emma. This film has a very “if Wes Anderson directed an Austen film” vibe. The attention to detail, visual style, and colorful palette feel like The Royal Tenenbaums or The Darjeeling Limited.

Eleanor Catton’s screenplay is lovely and very faithful to the book and Alexandra Byrne’s costuming is breathtaking. I don’t know if I’ve ever seen a film with costumes that made me gasp like this one—just incredible. It’s a visual banquet.

Casting, however, is hit or miss. Johnny Flynn is a great Mr. Knightley (although no one will match Jonny Lee Miller as Knightley, in my opinion). Bill Nighy brings a sprightliness to Mr. Woodhouse that is so glorious that I don’t even mind if it’s not textual. It works! Everything he does will delight you and you will covet his jacket and wish you had something covered with embroidery to wear all during quarantine.

Miranda Hart (Chummy from “Call the Midwife”) is hilarious as the awkward chatterbox Miss Bates. If only they’d given her more scenes!

Those are the stand outs. Unfortunately, a combination of mediocre casting for the rest of the characters and uneven pacing (the second half of the film feels rushed and convoluted) makes you long for the 2009 miniseries starring Romola Garai. The subplots of Frank Churchill/Jane Fairfax and Harriet Smith/the Eltons just aren’t fleshed out.

And then we get to Anya Taylor-Joy’s Emma.

I saw the film a couple of weeks ago and I’m still not sure whether I like her as Emma or not. Taylor-Joy definitely nails the superiority, superficiality, and selfishness of Austen’s Emma, but she never seems to capture the side of Emma that makes her lovable despite her obvious vices.

It’s not an easy task to capture the nuances of Austen’s most unlikable heroine but this screenplay focuses on Emma’s shortcomings in a way that makes it hard to imagine that Mr. Knightley could see anything worthwhile in her at all. But at least this adaptation includes the pivotal Box Hill scene and viewers do get to see some transformation in dear Emma.

Some final notable oddities in this film include a nosebleed inserted into the proposal scene that is just so off putting and strange that I’m still recovering. And near the beginning there’s a very random (but brief) male nudity scene.

So the adaptation does have its flaws. But it’s a highly enjoyable watch. Austen’s humor is highlighted with physical comedy reminiscent of a stage production, the ballroom scenes are swoon-worthy, and Austen’s dialogue is, as ever, sparkling. I think it will lift your spirits and bring some beauty to your home which is something we all need right now.

Pre-order it to stream here.

I’ve written about Emma in another post here at Carrots: Emma Woodhouse and the Cure for Selfishness

You can find more of my writing on literary classics in The Literary Medicine Cabinet: A Guide to Self-Care through Good Books.