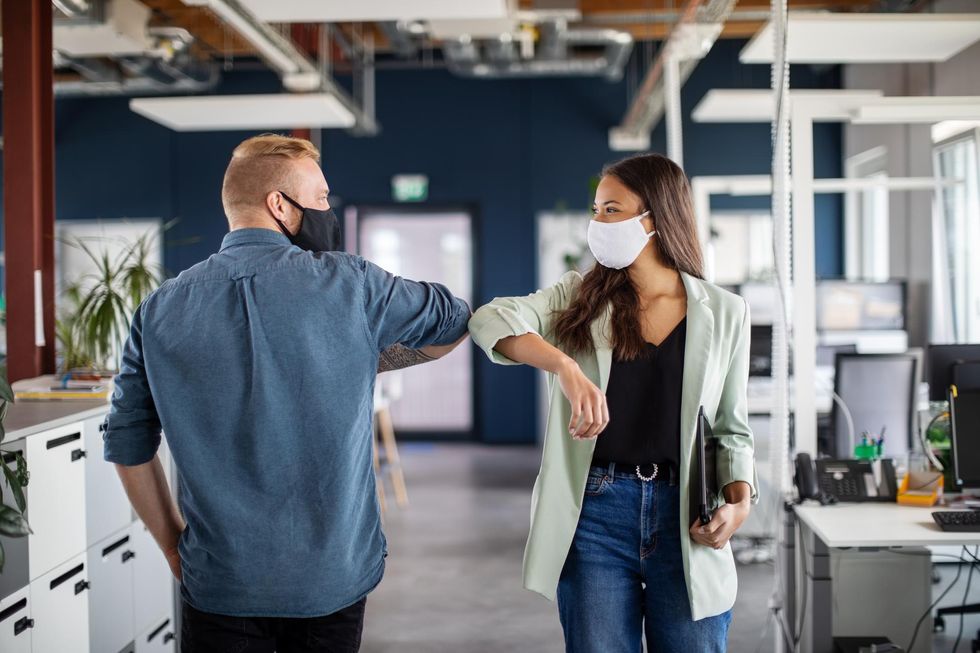 Horowitz: Why masks don’t work in the real world

There is not a single place on earth where masks appear even to have slowed the spread of the virus, which appears hell-bent on cutting through every population until the herd immunity threshold is met. None of this should have surprised us.

How many people do you know who always wear their masks fully clamped to their faces like a respirator? Well, there are very few people who can afford to pass out after hours of oxygen deprivation. That, in a nutshell, is why mask mandates are useless against a virus, even before we examine the fact that the pores in the mask fibers are much larger than the virus itself.

Stephen Petty, one of the most experienced certified industrial hygienists and exposure experts in the country, sent me the following chart based on new research on mask filtration (Drewnick, et al.). It demonstrates that if just 3.2% of the mask space is open, the efficacy of the mask goes down to zero!

As you can see, with just 2% of the mask area open, 80% of the particles under 2.5 microns will escape. Based on that study, Petty extrapolates that masks will be 100% ineffective in blocking any particles that small when the open area reaches 3.2%.


What people forget is that aside from the size of the pores in the fabric, very few people actually wear masks the way they test them in labs or on mannequins. As Petty points out, based on a new study of filtration leakage in masks from 44 different materials, most of the seepage comes out through the sides because the molecules always travel the path of least resistance.

"Measurements with defined leaks showed that already a small fractional leak area of 1–2% can strongly deteriorate total FE," concluded the German study published last October in Aerosol Science and Technology. "This is especially the case for particles smaller than 5 mm diameter, where FE dropped by 50% or even two thirds."

The study goes on to explain that because "surgical masks as well as cloth masks never have a perfect fit on the face," it is "one of the main reasons why in studies investigating filter efficiencies of masks under real life conditions for surgical masks" the efficacy is "significantly lower" than what we see with form-fitted N95s. It's also likely the reason why filtration studies in a lab show some degree of efficacy but not a single randomized controlled trial (RCT) has demonstrated efficacy of these masks against viruses, including 10 RCTs of the flu and mask-wearing, as well as the Danish study of mask use for COVID. Humans are not lab mannequins.

As Megan Mansell, a hazardous environs PPE expert, explained to me:

This is what everyone got wrong from day one, or perhaps what Fauci and others originally got right. The COVID conversation should have begun with minimum viable particle size under pressure, which for COVID-size particulates is .06 microns. 90% of exhaled particulates fall within the radically behaving particulate/airborne particulate range.

What that means is that once particles are well under 1 micron (smaller than most bacteria), they easily get through and around the mask, remain suspended in air for a long time, and travel indoors a lot farther than six feet. Once we learned that this virus was airborne and so small, it is simply impossible for masking and six feet to make a difference indoors.

Multiple virions can compose a single particle cluster and still fall well under that threshold. Thus, even if everyone wore masks properly, still enough virions would escape to essentially make mask-wearing nothing but theater, which is why we don't find any real-world evidence of masking helping at all, as cases surge in masked-up Michigan and decline to the lowest levels in a year in Texas and Mississippi.

My friend Emily Burns demonstrates this in a real-life example by exhaling cigarette smoke under a mask that was pretty form-fitted. As she noted on Twitter, cigarette smoke is less than 1 micron, which is the same size or larger than 99% of the virus-carrying aerosols.

In fact, brand-new research has shown that 90% of the virions of this virus are smaller than 0.3 microns. There are 100 times more aerosols under 1 micron (mostly significantly smaller) than over 1 micron. That is much smaller than the pores on surgical masks, much less cloth masks, not to mention the gaps around the masks.


What's more, the same study shows that at peak contagion around day seven of symptoms, with the inflammation of the alveoli, the number of particles under 0.3 microns increases tenfold, while the larger ones decrease. This likely explains why asymptomatic individuals barely spread and why masks are worthless when people are the most contagious.

We have been sold an illogical premise dressed up as science – that somehow masks do not protect you against inhaling someone else's virus, but they do protect others from your exhalation. That is the excuse given to force people who don't like masks to wear them, even though the people concerned about the virus are free to wear them if they think they work. However, while masks fail to work against a virus this small in both directions, if anything, they are even less likely to stop your exhalation of the virus than inhalation. As Emily Burns demonstrated in her video, with a KN95, which makes one feel like he is suffocating when inhaling, exhalation seems to flow easily through the gaps.

This is also why masking might possibly aerosolize the particulates even more than people who are unmasked. Which might explain why nearly every analysis shows more spread in places with mask mandates. As Megan Mansell explained:


Exhalation is the plosive outward release of respiratory gases and mucosal excretions that line the respiratory tract. Exhale pressure fluctuates based on an individual's overall health and level of physical exertion, as well as environmental oxygen saturation. More extreme changes in outward pressure accompany plosive force-generating events (sneeze, scream, cough, blowing, blowing raspberries) which each come with changes in facial characteristics like openness of the mouth and tautness of cheeks that impact outward pressure. The more fitted an apparatus is around the mouth and nose, the greater the release of pressure during general respiration and plosive force-generating events. About 90% of respiratory emissions fall within the radically behaving particulate range, which also encompasses the COVID virion particulate range. The more pressurized the plosive activity, the more force behind the plume.

Thus, masking is a catch-22. Either the virions come straight out of the sides and center or, in the case of tighter masks, plosive force creates greater pressure behind the escape of tiny particles, which are even more prone to travel greater distances and remain suspended for hours. Which is why, although N95s appear to perform well in mechanistic lab-based studies, they don't appear to stop the transmission from someone who is contagious in the real world.

Mandating medical-grade masks most certainly has not worked for Germany or Chile:

Two and a half months after Germany mandated medical grade masks for their improved efficacy, the 7-day average of… https://t.co/ljjbpCQjjn
— IM (@IM)1617129045.0

Stephen Petty sent me a chart from his presentation on mask filtration showing that the overwhelming majority of virions are of the size that have the ability to suspend in air for days.

Remember, the big droplets the politicians and the media speak of tend to fall to the ground immediately and don't travel far. There is no way they can account for this degree of ubiquitous transmission around the globe. It must be the micro-particles, which travel far in unventilated indoor rooms and remain suspended for days, that are causing the rapid spread. No mask has any efficacy against those particulates.

It's important to note that it's the small particulates that are most likely to get into one's deep lungs, not the larger droplets, which are more likely to be trapped in saliva or throat and ingested rather than inhaled. Also, mask-wearing tends to force more people to breathe through their mouths rather than normal shallow nasal breathing, which makes them even more likely to inhale the particles that inevitably get through their masks.

The public has been sold a lie about avoiding the virus by wearing a mask and staying six feet apart indoors. The reality is that we should have focused on dilution and filtration systems for a fraction of the funding we spent destroying the economy. We should also have focused on early and pre-emptive treatment with cheap drugs like ivermectin and hydroxychloroquine mixed with supplements of vitamins and zinc. Then again, this was never about science or saving lives. This was about controlling our lives and making us servile puppies to the governing elite. The mask is the ultimate symbol and reminder that we no longer control our own bodies.

Editor's note: In the original version of this article, the paragraph beginning, "This is what everyone got wrong from day one ..." was not attributed to Megan Mansell. This error has been corrected.

Horowitz: Why masks don’t work in the real world