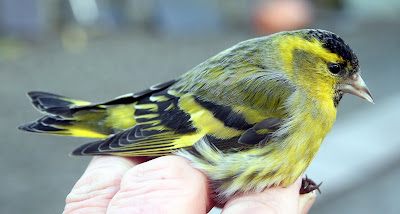 It was on Wednesday 20th March that I told of a ringed Siskin that we caught up at Oakenclough. The super-efficient BTO with their on-line ringing database DemOn soon came up with the answer; and a good one too.
Siskin S896866 had been ringed as an unsexed juvenile on 18 July 2017 at Cnoc, Argyll and Bute, Scotland. Although full grown Siskins can be easily assigned as either male or female, during July all juveniles appear alike. By 20 March 2019, 610 days and 282 km from Cnoc we were able to accurately age and sex it as an adult male.
We can be pretty sure that this Siskin was born close to Cnoc in 2017 but we cannot be sure of its journeys in the intervening period. Mr Google tells me that “cnoc” is a Gaelic word for “hill” or “mount”. 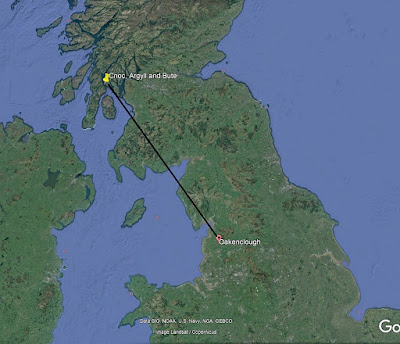 Siskin
Fast forward to this morning where Andy and I met up to another damp and misty start with a cold NW breeze, despite the forecast of a bright and sunny morning; another case of the Londoncentric mind-set that dominates UK media.
The session began in a rather strange way with a previously unheard of phenomenon of a net containing 7 Coal Tits, none of them recaptures from previous days or carrying a ring from elsewhere. UK Coal Tits are rather sedentary and rarely travel any great distances.
The cold wind stayed, turned more northerly and even increased slightly to put paid to the chances of any visible migration. Although there was a flurry of 10-15 Siskins about 1000, we caught none of them and finished quite early with just 14 birds - 7 Coal Tit, 2 Lesser Redpoll, 2 Blue Tit, 1 Wren, 1 Great Tit and 1 Chiffchaff. 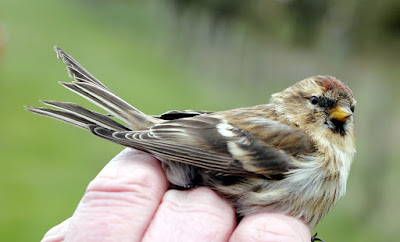 Lesser Redpoll
The Chiffchaff was our first of the spring. It's a week or so early to expect a the "chiff's" close relative the Willow Warbler up here.

Chiffchaff
We hope to be out ringing very soon.
Source: anotherbirdblog