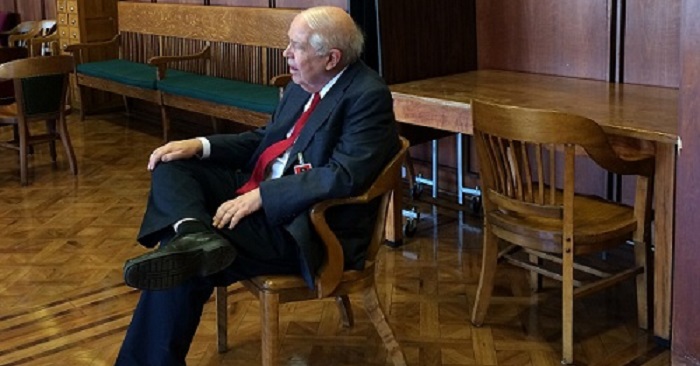 Q. David Bowers on Bill Bierly’s In God We Trust 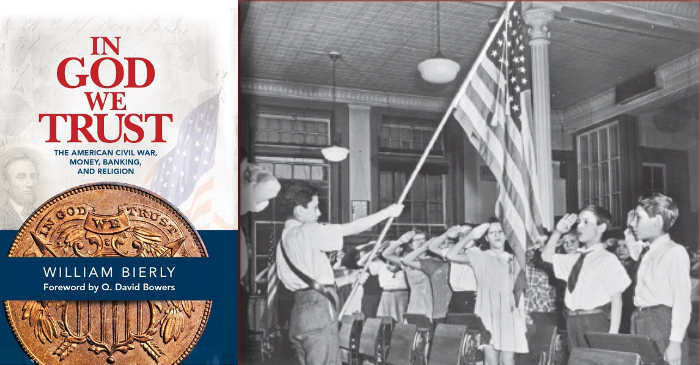 (Pelham, Alabama) — In November 2019 Whitman Publishing will release William Bierly’s In God We Trust: The American Civil War, Money, Banking, and Religion. The 352-page hardcover volume will be available from booksellers and hobby shops nationwide, and online. Here, numismatic historian Q. David Bowers shares his thoughts on the book.

Bill Bierly’s In God We Trust is one of the most detailed, intricate, and fascinating books in the field of American numismatics—and in American history in general.

The national motto “In God We Trust” is familiar to all of us. Look in your pocket change or wallet and you will find it on every United States coin and paper bill. Before reading the manuscript to Bierly’s book I thought I knew all about the subject. 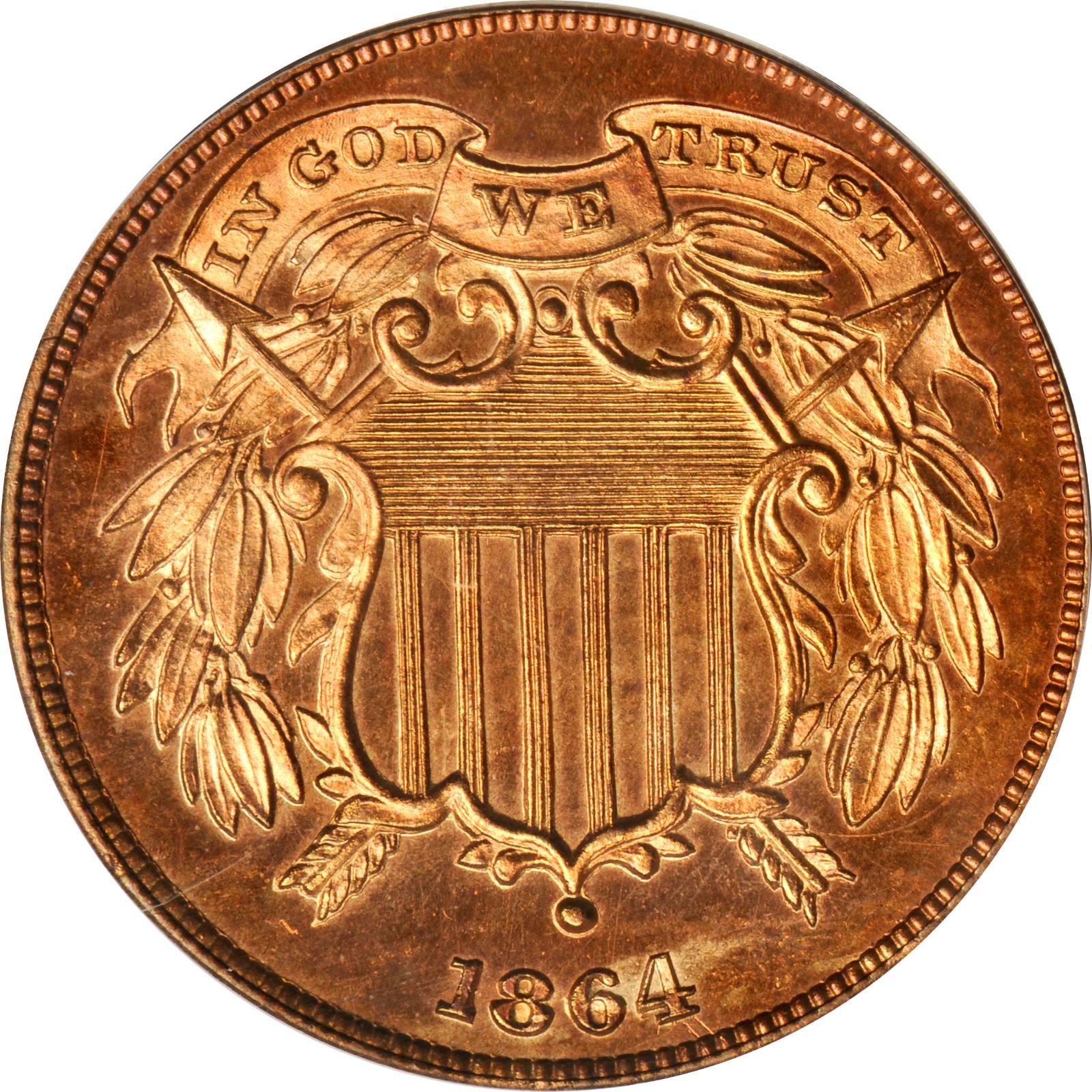 Some years ago I wrote an article, “God in Your Pocket,” for my local Presbyterian Church, telling of the motto’s use on coins. I knew it appeared on pattern coins in 1863 and in 1864 made its first appearance on a circulating coin, the bronze two-cent piece, a new denomination introduced that year. I had the obscure knowledge that “In God We Trust” is the motto of the State of Florida and was used on certain National Bank notes issued in that state in the second half of the 19th century. 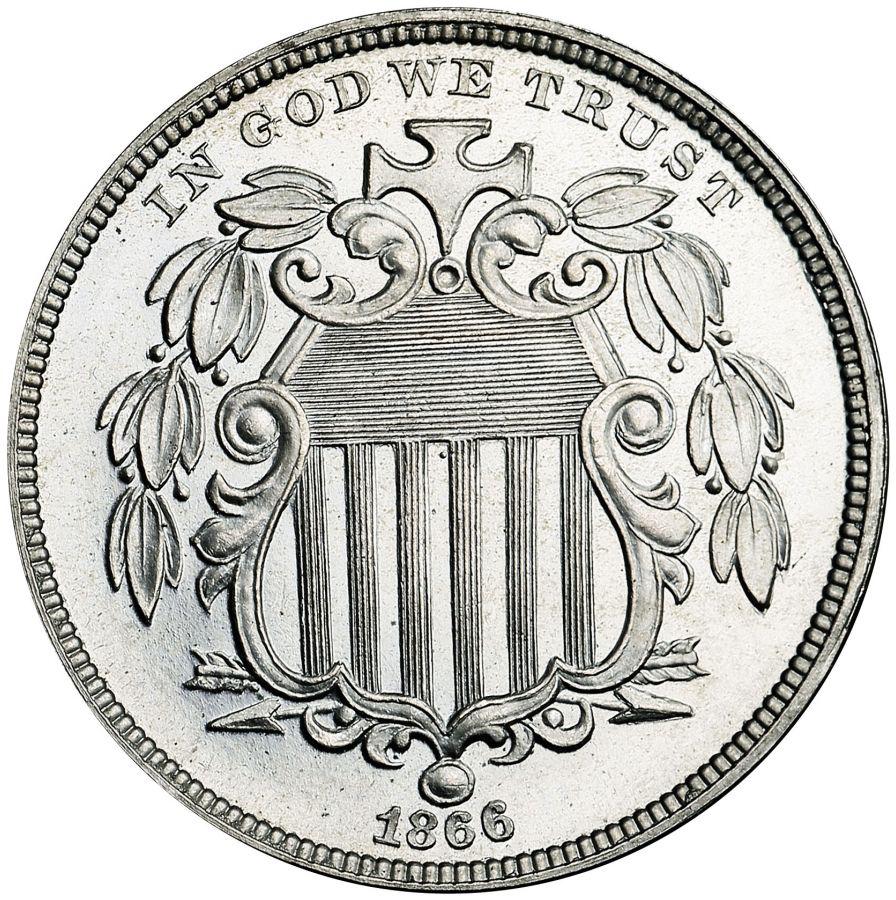 I also knew that the $5 Silver Certificates of the Series of 1886 illustrate the reverse of a Morgan silver dollar of that year, with the motto as part of the design.

But what I didn’t know were 101 other details—make that many more than 101 different details—as to how the motto came to be, how it was used over the years, and the wide cast of characters in the Treasury Department and elsewhere who participated in its use on money.

All too often, books, newspaper columns, and magazine articles about popular subjects lack many details. For Whitman Publishing I wrote a volume on President Ronald Reagan, and I read every book and important study I could find. There were very few details about his personal day-to-day life. Not to worry about the historical personalities involved with “In God We Trust.” While you might not learn the names of the protagonists’ pet cats or their favorite dime novels, there is not much else missing in Bierly’s excellent narrative. Dozens of cast members play cameo roles and small walk-on parts.

It is probably correct to say that no other researcher could add to Bill Bierly’s efforts! He collaborated with professional numismatists, leaving no stone (or coin) unturned in the creation of this book. Commonly believed myths and misunderstandings he examined, debunked, and corrected. Hundreds of historical images were collected, many of which have never been published in a numismatic reference, to which have been added beautiful photographs of rare coins, patterns, tokens, medals, and paper currency, including close-ups of important characteristics. All of this required a lot of work, creativity, and careful attention to detail.

Further on the subject of detail: I enjoy learning about and digging deeply into previously unexplored subjects. I have written books on the Waterford Water Cure (a health spa in Waterford, Maine, that counterstamped coins as advertisements), The Strange Career of Dr. G.G. Wilkins (about a countertstamper who was a dentist, also operated a restaurant with a caged bear in front, and was suspected of passing counterfeit money and also burning down a neighbor’s barn), and, for good measure, books about Alexandre Vattemare (a French numismatist who visited America and became important to the development of libraries here), and Augustus G. Heaton (the teenaged coin dealer who founded the American Numismatic Society in 1858).

Each of these books was popular in its time, despite their obviously obscure subjects. Readers find satisfaction in a well-told story that brings new depth and insight.

That is precisely what we get with In God We Trust, debuting this holiday season. Anyone with a combined interest in American history and numismatics will find a new world of important information, fascinating details, and previously unconnected relationships. 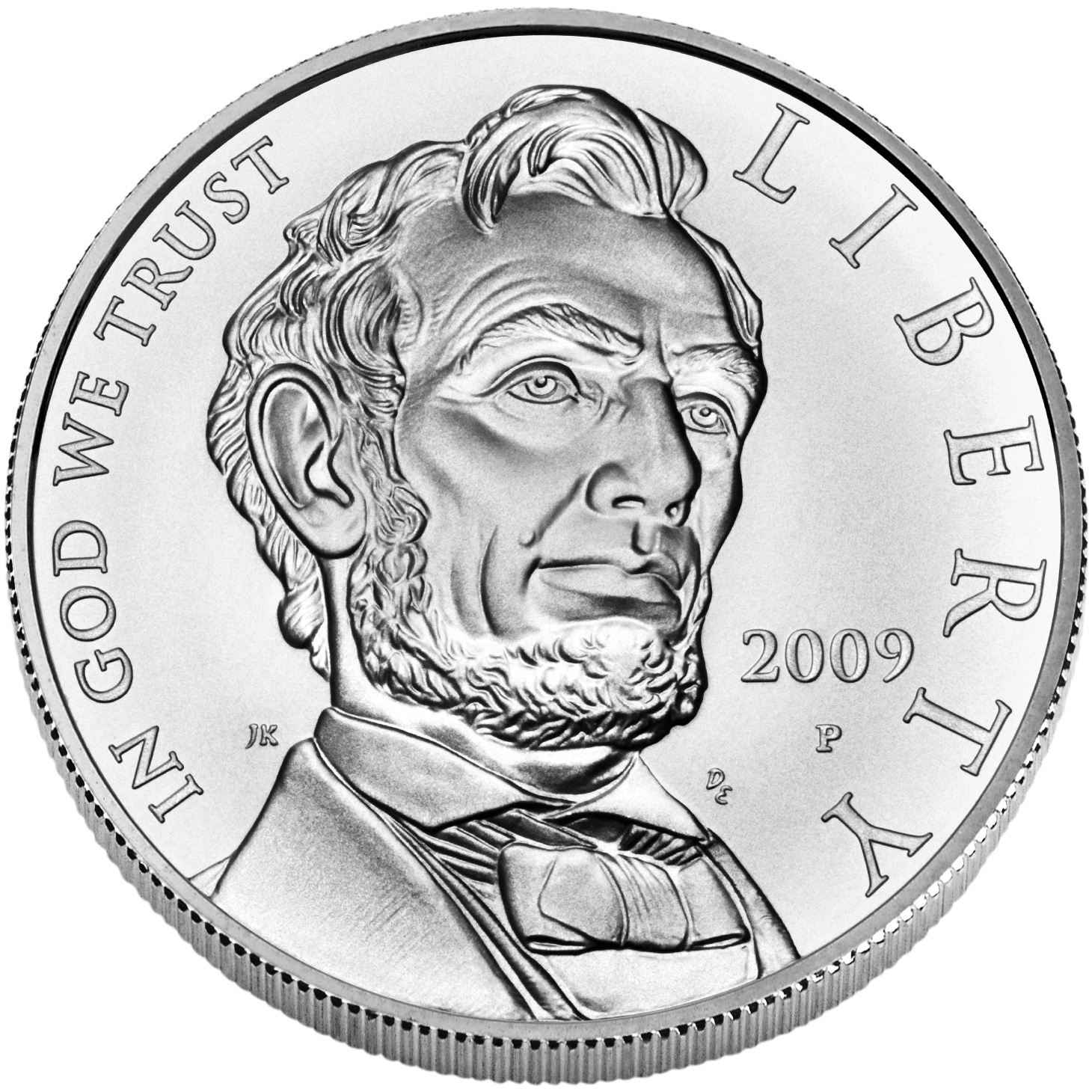 The motto “In God We Trust” is hardly history alone. It is so much more, and it means different things to different people. Today there are vocal critics who feel that it has no place on coins or paper currency. For that matter, some believe that God has no place in public (and in some cases, private) life. On the other hand, many more people do indeed believe in the Supreme Being. Sometimes it just seems the naysayers get all of the publicity. 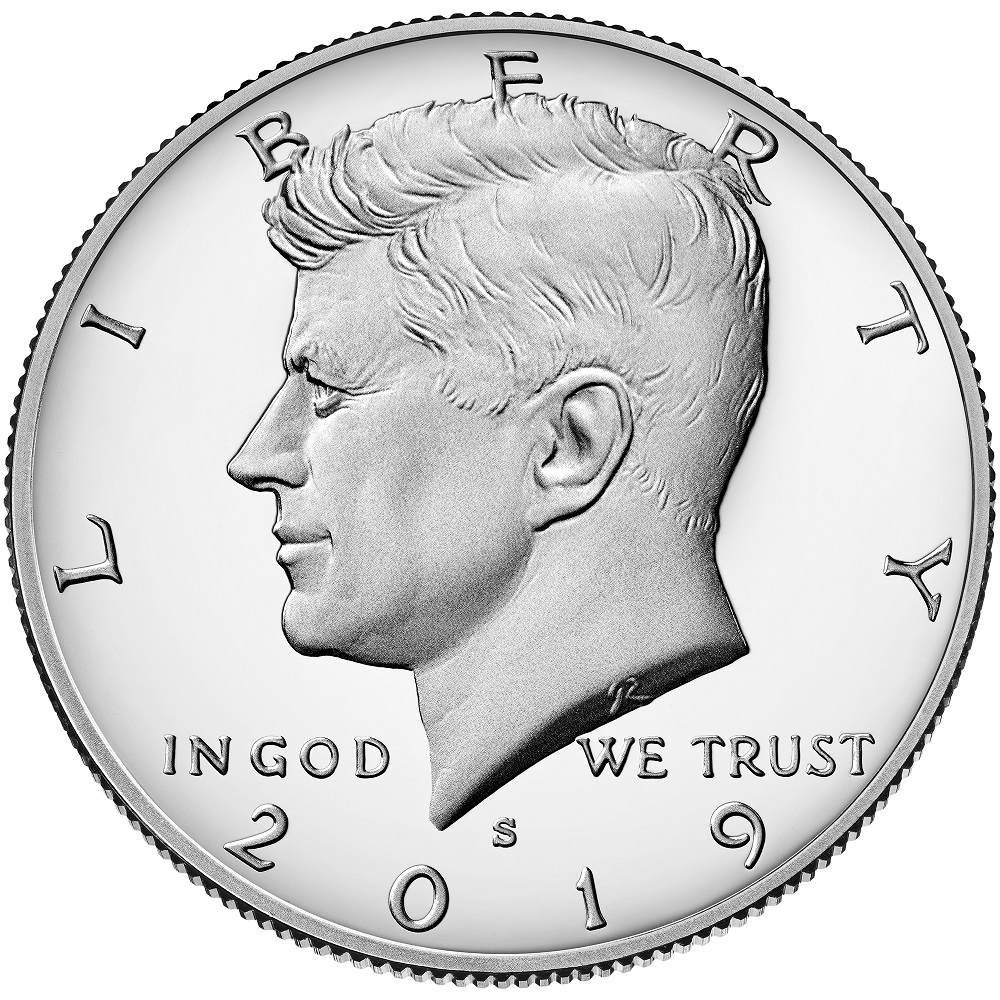 “In God We Trust” has appeared on American money since the Civil War. William Bierly tells how the national motto came to be. (Photographs courtesy of Stack’s Bowers Galleries and the United States Mint.)

Bill Bierly’s In God We Trust approaches the subject respectfully on all sides, with color, personality, dashes of humor, and dogged pursuit of the truth. He has given us a smorgasbord: There is a lot to choose from. If you are a collector and strictly so, with no interest in the million points where numismatics touches American history, you can simply immerse yourself in the coins, paper money, tokens, and medals. If you are like me, however, and enjoy every historical highway and byway connected to American money, you will read and find pleasure in the entire book from start to finish.

David Bowers is the award-winning author of more than 60 numismatic books ranging from 90-page monographs to 900-page encyclopedias, hundreds of auction and other catalogs, and several thousand articles including columns in Coin World, Paper Money, and The Numismatist. He is a past president of both the American Numismatic Association (1983–1985) and the Professional Numismatists Guild (1977–1979). In his 60-plus-year career in numismatics, he has earned most of the highest honors bestowed by the hobby community, including the ANA’s Lifetime Achievement Award and induction in the ANA Numismatic Hall of Fame. 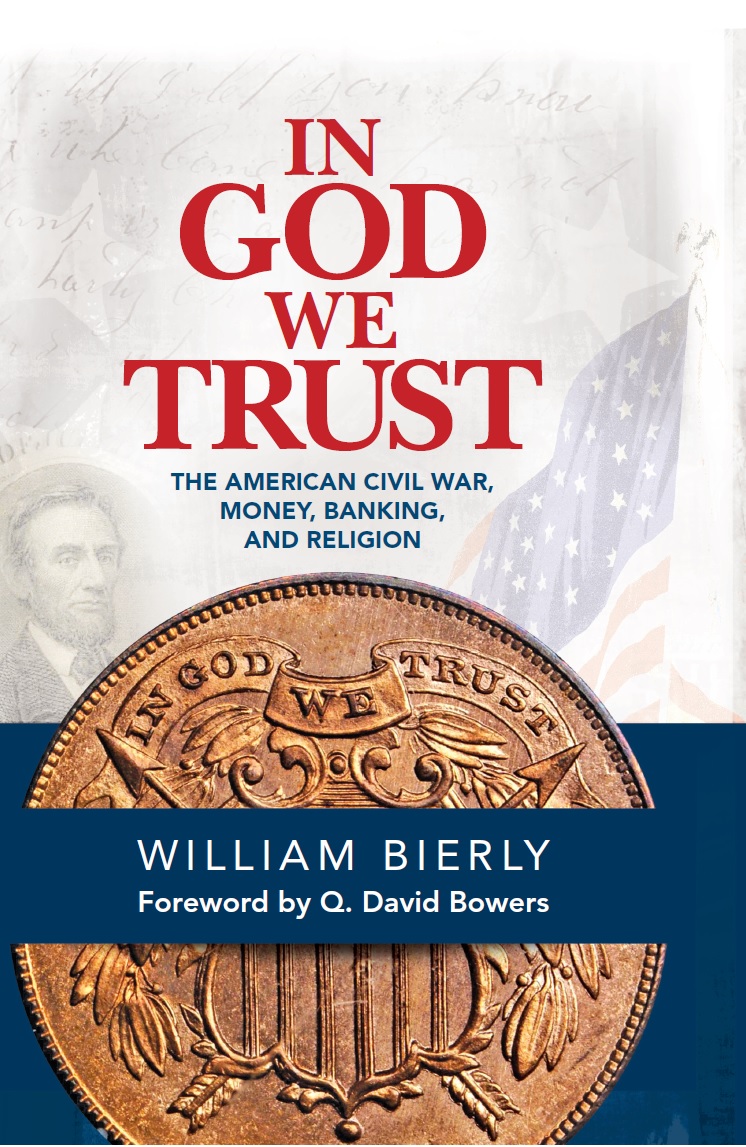 In God We Trust: The American Civil War, Money, Banking, and Religion 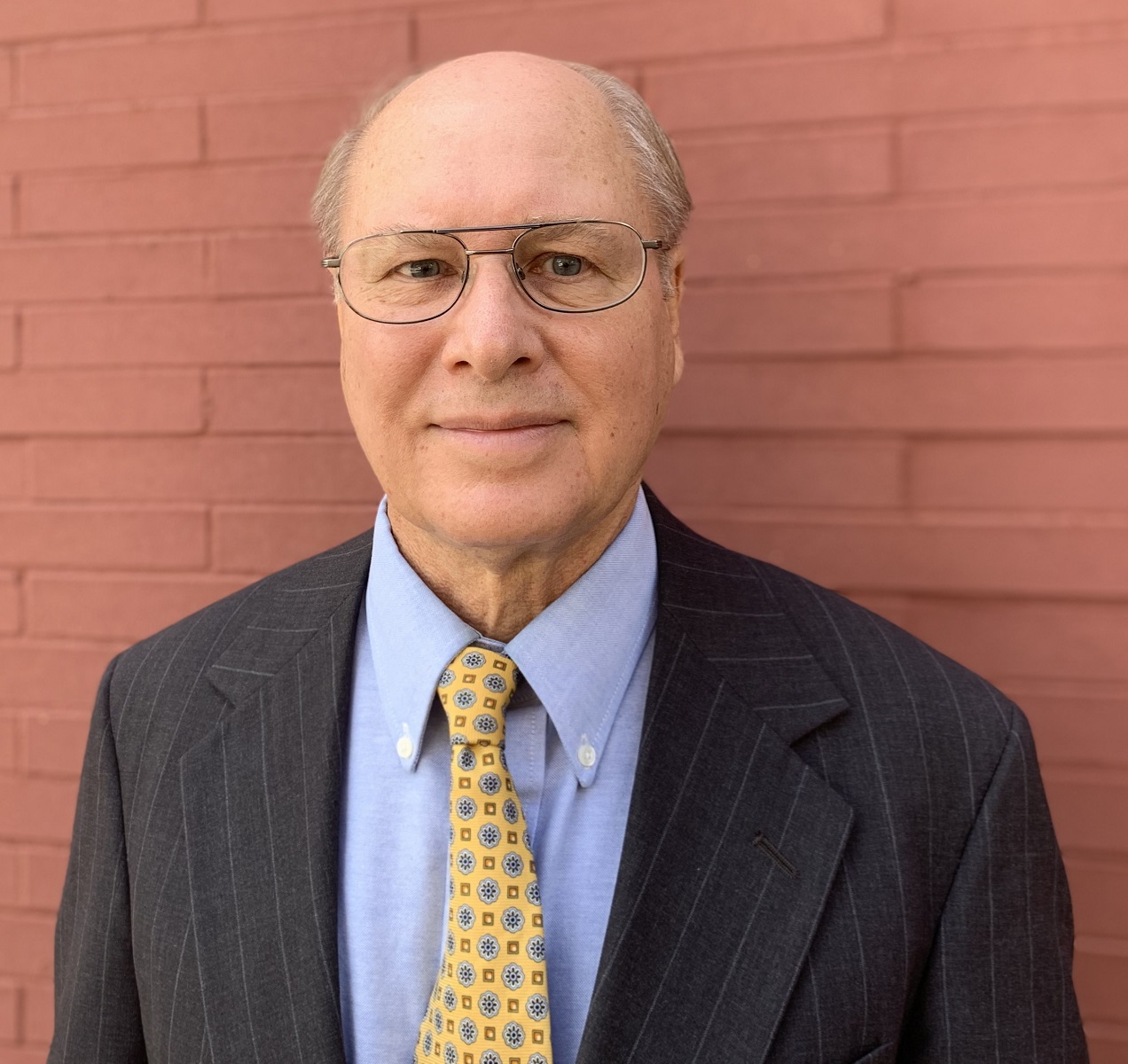 William (Bill) Bierly was raised on a farm near Walkerton, Indiana. As a child, he heard stories from his grandparents about two of his great-grandfathers who had served in the Civil War. This led to a lifelong interest in that war and that period of history. At about age eight, he began collecting coins from circulating change. Following high school Bierly attended Northwestern University for two years and then completed a degree in sociology and economic development with a minor in Chinese studies at Indiana University. He then worked in India for two years as a Peace Corps volunteer in a dairy development project. Back in the United States, his interest in coins was rekindled. He soon went abroad again, working for three years in Osaka, Japan. Then in the United States, he operated a small business for five years, sold it, and entered graduate school, earning an MBA in finance from Indiana University and embarking on a 25-year career in commercial banking. With his overseas experience, Bierly focused on international banking, particularly Japanese corporate business and Asian correspondent banking. He began his career at the National Bank of Detroit, and he worked with J.P. Morgan Chase for much of his career; at various times at the bank’s Detroit, Chicago, and Columbus, Ohio, offices, as well as often traveling to Asia.

Bierly resides in LaPorte, Indiana. He has two children, Emma and Ken, as well as a granddaughter, Kiki.

Whitman Publishing is the world’s leading producer of numismatic reference books, supplies, and products to display and store coins and paper money. The company’s high-quality books educate readers in the rich, colorful history of American and world coinage and currency, and teach how to build great collections. Archival-quality Whitman folders, albums, cases, and other holders keep collectibles safe and allow them to be shown off to friends and family.

Whitman Publishing is the Official Supplier of the American Numismatic Association. As a benefit of membership in the ANA, members can borrow In God We Trust (and other Whitman books) for free from the Association’s Dwight N. Manley Numismatic Library, and also receive 10% off all Whitman purchases. Details are at the website of the ANA.

Q. David Bowers on Bill Bierly’s In God We Trust