OXFORD, Mich. — A 15-year-old opened fire at his Michigan high school Tuesday, killing at least three people and wounding eight others, authorities said, in what appears to be the deadliest episode of on-campus violence in more than 18 months.

The suspect, who police have not named, was a sophomore at Oxford High School in southeast Michigan and had attended class before the rampage, Oakland County Undersheriff Mike McCabe said. The first in a flood of 911 calls came in just before 1 p.m., and officers responded to the scene within minutes, arresting the gunman who shot 11 people, including a teacher.

It is not yet clear what motivated the shooting, McCabe said. The gun, a 9mm pistol with 15-round magazines, was purchased by the suspect’s father last week, four days before the shooting, said Oakland County Sheriff Michael Bouchard.

Authorities identified the students who were killed as 14-year-old Hana St. Juliana, 16-year-old Tate Myre and 17-year-old Madisyn Baldwin. Three of the wounded teenage victims, two girls and a boy, were in critical condition on Tuesday evening, police said. One student was in serious condition, three students were stable, and the 47-year-old teacher was released from the hospital.

Even though school shootings largely dropped out of headlines during a stretch of the coronavirus pandemic when students were learning online from home, the scene in Oxford Township, 40 miles north of Detroit, was frighteningly familiar: Shaken students huddled outside their building, desperate parents scrambled for news of their loved ones and officials searched for words to describe a tragedy that has plagued communities across the country for decades.

Michigan Gov. Gretchen Whitmer (D), who appeared at a news conference near the scene early Tuesday evening, said the shootings are “a uniquely American problem that we need to address.”

“I think this is every parent’s worst nightmare,” Whitmer said, her voice cracking.

The suspect fired 15 to 20 shots, mostly in the school’s south end, McCabe told reporters. Officers, including the one assigned to the school, confronted the gunman, who McCabe said “did not give us any resistance as he was taken into custody.” He has “invoked his right not to speak,” asked for an attorney and is not cooperating with the investigation, McCabe added.

Students, who barricaded themselves in classrooms and piled into bathroom stalls, recounted in interviews the terrifying moments after gunfire cut through their afternoon lessons.

When a bullet pierced the door of an AP statistics class, senior Kristina Myers began passing out calculators — the only makeshift weapon the students had to throw at the gunman should he enter the room.

They piled desks high in front of the door, and Myers found herself wondering if her life was about to end.

“I had accepted it,” she said. “If my teacher didn’t close the door when she did, our class would have been dead. I know that for a fact.”

Myers is now one of many of Oxford High’s 1,800 students grappling with “what ifs” in the aftermath of a shooting in this quiet town, home to 22,000 people.

“If I had eaten my lunch a little faster, I could have died,” said senior Drew Raab, who had just passed the area where the shooting began.

Freshman Julia Begley was in a nearby hallway when the shooting started. She fumbled with the knobs on locked classroom doors. A friend pulled her into the bathroom, where she crouched by a toilet with other students.

“I was just very confused and really anxious, just panicking,” she said. “I was holding my friend’s hand with one hand. With the other I was holding the girl next to me. I didn’t know her, but it felt like I’d known her a long time.”

Senior Callum Gross had just walked into calculus when he heard four loud bangs and the classroom went into lockdown. The shooter tried to get inside, Gross said, but he wasn’t able to open the door.

“After that, we could hear screaming,” he said. “People were screaming for help. But there was nothing we could do.”

In the news briefing, McCabe downplayed rumors that there were prior threats of an attack on the school. His department was not aware of any warnings, he said.

“There’s all kinds of things out on social media, please don’t believe everything you hear and see on social media,” McCabe said. “There’s a lot of stuff out there, I can’t confirm whether it’s true or not. Ultimately, we will get to the bottom of this.”

McCabe praised the school district’s preparation for an active shooter situation, saying his office has done multiple trainings and administrators “did everything right.”

“You never want to prepare for something like this, but you have to,” he said. 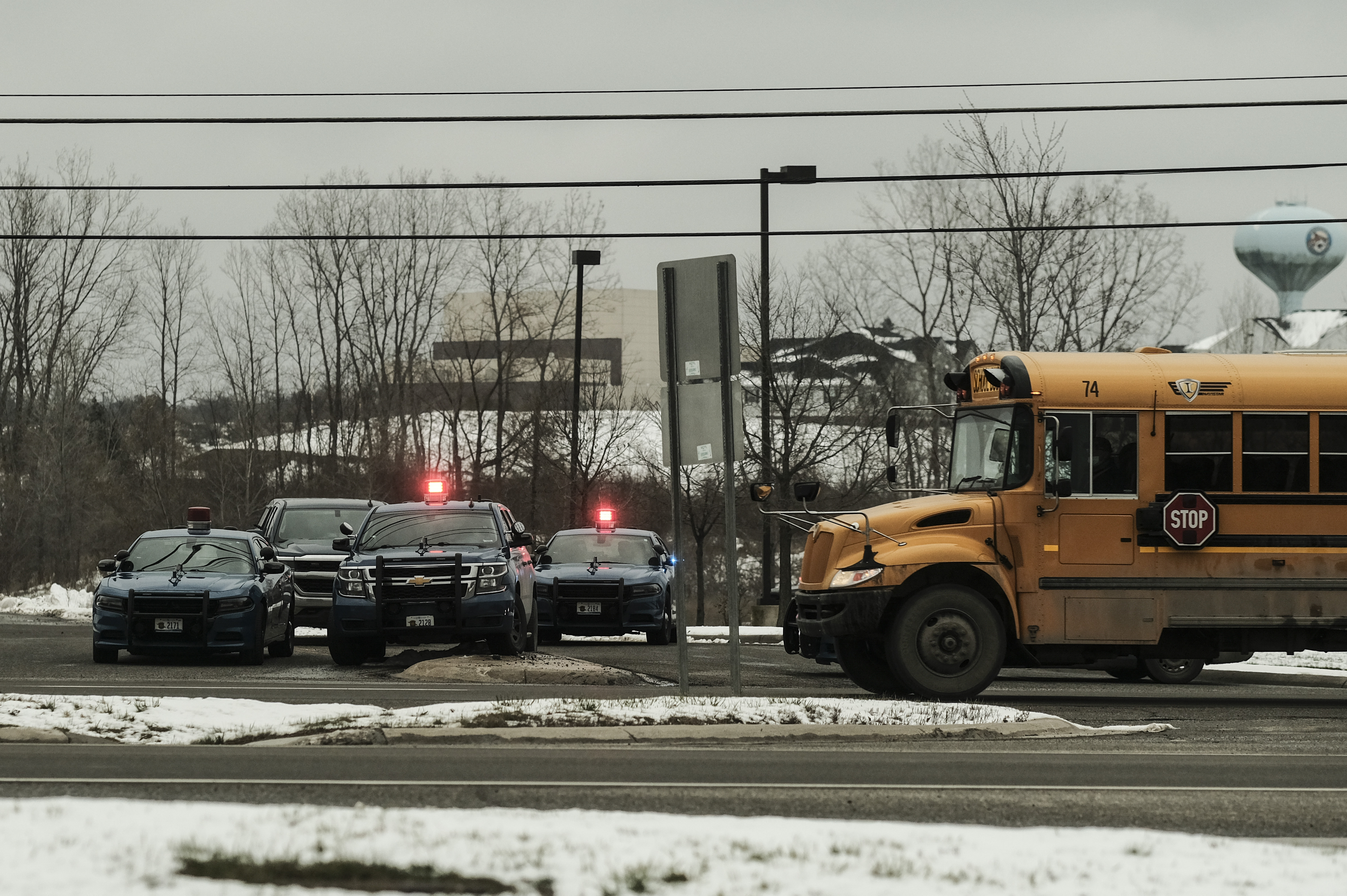 A pair of letters from Oxford High School’s administration earlier this month addressed the security concerns that circulated among students in the weeks before the shooting, stemming in part from a disquieting case of vandalism that involved a severed deer head thrown into a school courtyard and graffiti done with red acrylic paint. The school’s principal, Steve Wolf, said in a Nov. 4 letter that police had located the suspect and the person “is not a threat to our building.”

But the rumors continued. Eight days later, administrators sought to reassure parents, writing that they had investigated the reports and found nothing credible.

“Student interpretations of social media posts and false information have exacerbated the overall concern,” the Nov. 12 letter reads. “We want our parents and students to know there has been no threat to our building nor our students.”

Police said Tuesday that the suspect in the deer head and paint incident is not the one who allegedly carried out the shooting.

Treshan Bryant, a senior at the school, said in an interview that he had heard rumors this month that somebody was “going to shoot up” the building.

“That puts a lot of fear into a kid,” he said. He said he started staying home from school on days where he had a feeling that something bad might happen.

Tuesday was one of those days.

After he heard about the shooting, he said he rushed to campus with his mother to check on his friends.

His mother, Robin Redding, argued the school should have had metal detectors and wondered if officials had overlooked warning signs.

“You have to pay these kids some attention, listen when they’re saying something,” she said.

McCabe would not say whether the suspect had made threats leading up to the shooting, but said the possibility is part of the police investigation. Officers searched his home Tuesday night. The suspect was booked into jail as a juvenile but could be tried as an adult, McCabe said.

At least 100 officers and other personnel from two dozen agencies, including the FBI, responded to the shooting. Nearly 60 ambulance units were sent to the school, as well as helicopters, because they were not sure how many people would need to be transported, said John Lyman, a public information officer for the Rochester Hills Fire Department.

Parents walk with their children from a parking lot where many students gathered following a mass shooting at Oxford High School, Nov. 30, 2021, in Oxford, Mich. (Eric Seals/Detroit Free Press/AP)

The White House said President Biden has been monitoring the incident and, appearing at an event in Minnesota, he said “my heart goes out to the families enduring the unimaginable grief of losing a loved one.”

The shooting is another example of violence on school grounds that has soared this fall, with experts observing that students returned to campuses emotionally damaged and sometimes unable to conform to expected behaviors or navigate conflicts with their peers and teachers.

Teachers and school administrators across the country have reported a rise in everything from minor misbehaviors to fighting in the hallways to gun-related incidents. Mass shootings like the one in Michigan Tuesday remain far less common.

Everytown for Gun Safety, an advocacy group, reports that nationally in 2021, there have been at least 138 incidents of gunfire on school grounds, resulting in 28 deaths and 80 injuries. Of those, 89 incidents occurred this fall, nearly triple the previous high of 33 during the same period.

The Center for Homeland Defense and Security, which maintains a database of K-12 school shootings, has totaled 219 incidents of gunfire on school grounds this calendar year, not counting the Michigan incident. Of those, just eight were active shooters — the sort of school shooting that comes to mind for many people. That number is in line with data from past years.

But the 211 other incidents of gunfire has soared far above past years. That is more than quadruple most years since 1970 and almost double the prior three years, said David Riedman, lead researcher on the K-12 School Shooting Database.

“There are a lot of tensions that kind of boiled while students were all virtual, and once they were back together in the schools a lot of that has turned into physical altercations,” he said.

Holly Bailey in Minneapolis, and María Luisa Paúl and Lateshia Beachum in Washington contributed to this report.