The reason that the Symphony No. 2 by Sibelius also came to mind when I was reading about the interesting rhythmic aspects of the opening of the Symphony No. 40 by Mozart is that I recollected that there is something odd about the meter there as well. Let's just have a listen first.


Let's pretend we are taking it down in dictation. How would you notate that opening? Some kind of compound duple time, right? Either 6/8 or 6/4. Here are a couple of possibilities: 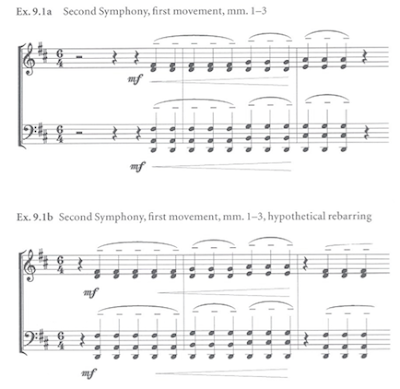 These are taken from the essay "Meter in the opening of the Second Symphony" by Tapio Kallio published in Sibelius Studies, ed. by Timothy L. Jackson and Veijo Murtomaki, Cambridge University Press, 2001. Tapio Kallio suggests that what we actually hear is the second version. The first version is how Sibelius notates it in the published score. Mr. Kallio offers some interesting evidence for his interpretation taken from the original manuscript held in the Sibelius Museum in Turku. Above is the original version from the manuscript and below is the final version:

Sorry about the teeny tiny image. If you click it should be big enough to read. Kallio's example goes on for three more pages, but I think this opening gives us enough to talk about. Essentially, Sibelius moved the opening to later in the measure. What I hear is that in Kallio's hypothetical rebarring, the listener hears the barlines as being where the top of the chord rises from F# to G. It is also natural to hear just one rest instead of several. Notice this, though: in Sibelius' rebarring it is the F# and A that fall on the strong beats and the crescendo is delayed accordingly. Kallio offers some interesting commentary suggesting that the opening could be heard as a 2/2 meter instead of a 6/4 meter. Here is his analysis: 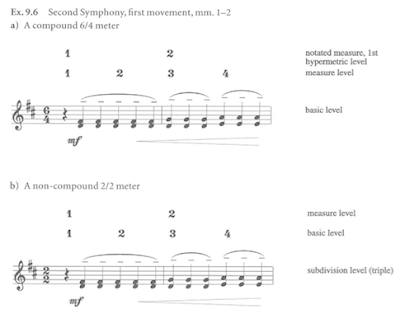 That doesn't look or sound like 2/2 to me, but maybe I'm missing something as he is relating it to the following woodwind theme. But I could certainly hear the opening in 3/2 instead of 6/4, despite the indicated phrase groupings. Actually, I think a lot of performers, myself included, try out different metric groupings when we are learning a piece. It gives you different perspectives and can add to your interpretive understanding. It seems as if what Sibelius is up to with his revised metric notation is to make the character of the opening more ambiguous, more tentative, to create a narrative in which the ambiguity of the opening leads to a later unfolding. Kallio mentions that the horns seem to contradict the meter when they come in.

The paper by Kallio goes into a lot more detail, so please seek it out if you are interested. In the meantime, enjoy the whole symphony. The last movement is a particularly successful symphonic finale in my view!

This is Leonard Bernstein and the Vienna Philharmonic. Notice that he beats all the rests of the opening measure!