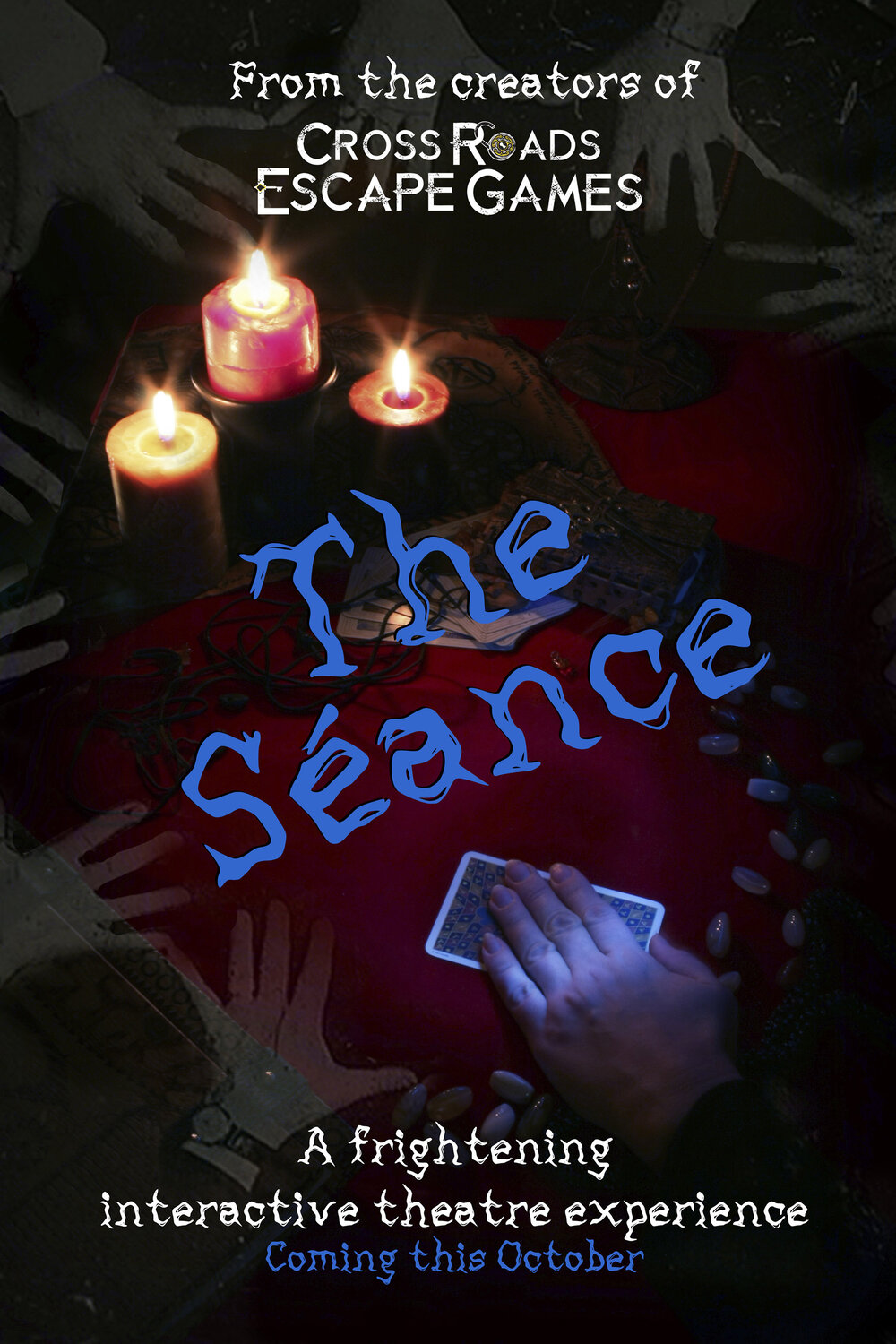 It’s been a while since we’ve visited Cross Roads Escape Games. Three years, to be exact. In that time, this award-winning and consistently highly rated company has added a third escape room—Psych Ward—to join The Hex and The Fun House, and this fall, it’s started its first foray into the world of immersive theater with a production that mixes elements of a play, an escape room, and an interactive story, called The Séance.

This is an endeavor that creator Madison Rhoades has dreamed of doing ever since Cross Roads Escape Games opened. A veteran of the first three seasons of Delusion, a lead scenic painter for Dark Harbor in the past, and a fine arts and theater graduate from USC (fight on!), Madison has always dreamed of owning her own theater. Her creation and operation of Crossroads Escape Games with her husband, Luke, has helped grow this love and flush out the aspects of storytelling, but Madison has not been able to present an active piece of theater of her own… until now.

We stopped by Cross Roads Escape Games last Friday to check it out.

The gist of The Séance is relatively straightforward. Groups of up to eight guests are invited to the mysterious Madame Ruby to take part in her supernatural ritual. However, when contact to the other side is reached, the horrors that await may be more than anyone—including Madame Ruby herself—can expect! The resulting 60 minute experience weaves a mystical tale of black arts, secret identities, and cursed spirits. Can the participating audience unravel the cryptic clues left behind before the dark forces surrounding this spectral space break through and claim them for their own? 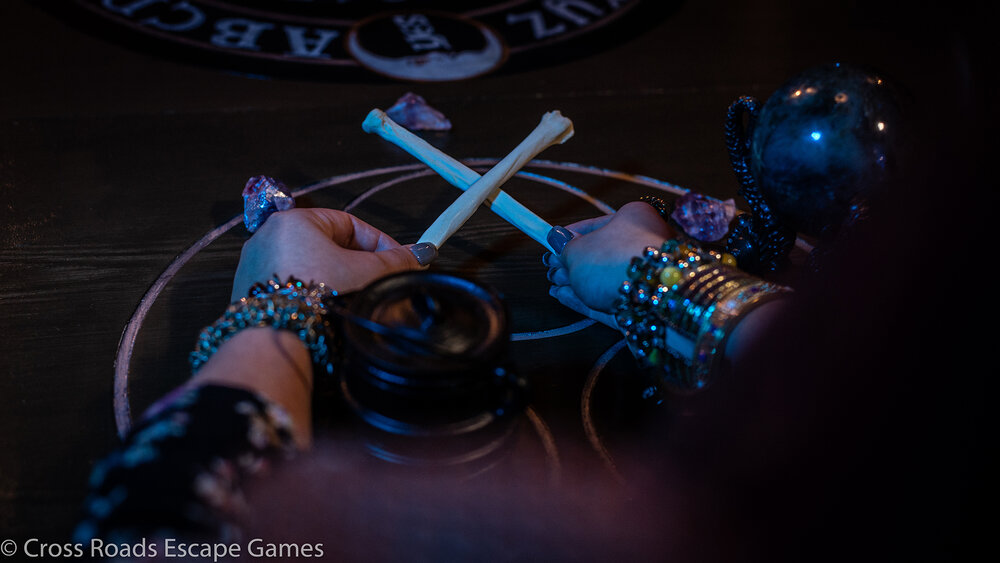 The Séance is just about a one-person show, owing most of its performance to Madame Ruby and her later-revealed true identity (played in our showing by the incredible Geovanna Flores). Actually, it’s a two-woman show. Madame Ruby is the guide and medium for both the spirits and the progression of activities throughout the experience, and a second actress and puppeteer (in our case, the talented Desiree Nguyen) handles literally every other character in the show.

The play places an incredible amount of storytelling and lines upon Madame Ruby, laying out the premise of why everyone is here, as well as the setup for the séance undertaking, plus the revelations of each plot point as they come to light. She also helps supervise the gathering of clues and achievement of tasks to keep this piece of interactive theater running along, and reacts to the demonic threats that are unleashed as everyone plunges deeper and deeper into the ceremony. Geovanna Flores (one of four Madame Ruby actresses) is remarkable in her portrayal of the role, taking on the showy drama of Madame Ruby as well as the intimate, tortured guilt of her eventual revealed identity, plus the angst and fear when she is targeted by the shadowy spirit that is summoned. In one particular moment, an attempted possession transforms her into a semi-maniacal being herself, and her fully committed, writhing agony leaves the guests transfixed. 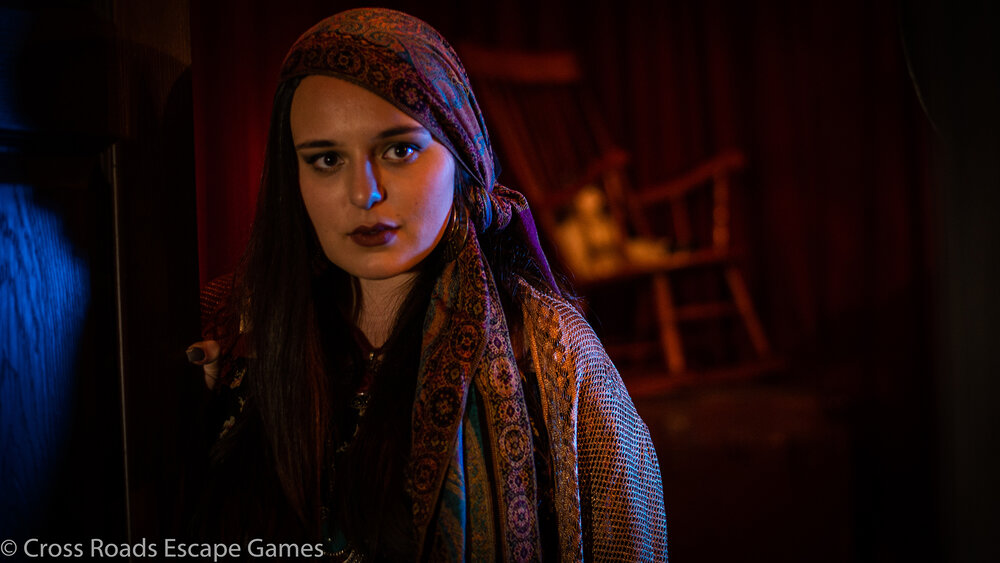 The puppeteer role is no easy task either. There are a few puppets employed to tell the story, including the trapped spirit, Ruth, with whom Ruby makes contact, and an amazingly creepy hag who poses one of the several challenges the audience needs to solve. The back and forth of positions—plus a separate actor role that this position needs to fulfill at the climactic finale of the story requires a lot of running around and synchronized motions, and Desiree Nguyen nails all of it flawlessly.

Scenically, The Séance is luxuriant and and gorgeous. The entire play takes place in one room accessed up a flight of stairs on a side entry of the Cross Roads Escape Games building, and this space unfolds like an attic treasure trove of artifacts and antiques, with layers upon layers of beautiful furnishings mixed with expertly rigged machinations used to trigger a plethora of ghostly effects. Madison and Luke have drawn upon their escape room and theater experience to richly dress the space with an incredibly enveloping level of detail, and the result is magnificent. 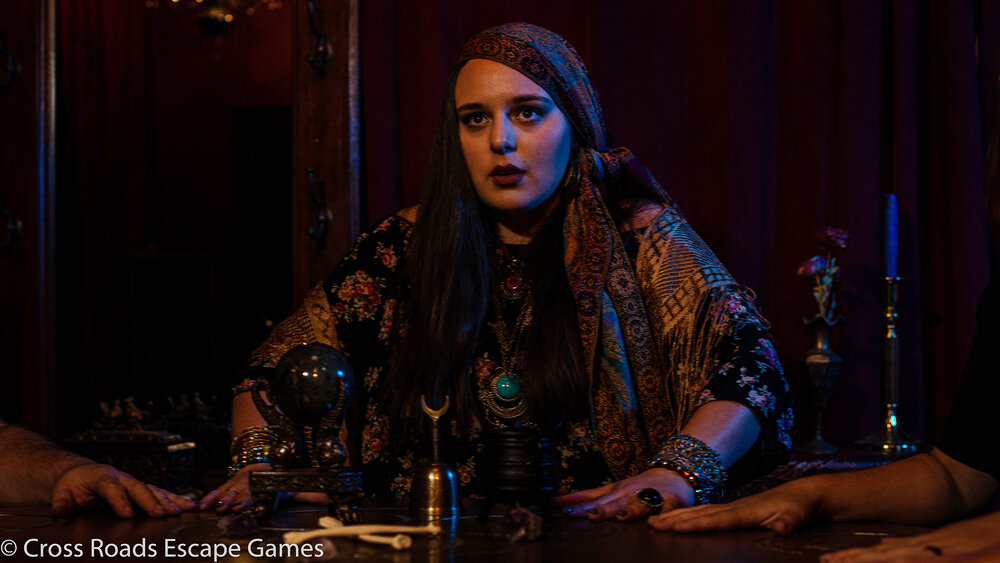 The same can be said about the puppet designs themselves, which are haunting, intricate, and beautiful. The puppet portraying Ruth bears a forlorn expression of despair and doom, while the Hag carries a monstrously ancient yet prescient-looking aesthetic. She is threatening and mischievous and most definitely unnerving. Certainly, in terms of the visuals, The Séance is an absolute gem.

The incorporation of escape room elements also makes for an exciting and cooperative session. At certain points in the show, the guests must look for physical objects to form clues, decipher riddles and puzzles, ask certain pointed questions to uncover answers, and help Madame Ruby perform certain rituals to defend against the antagonistic forces that intrude. Team work is definitely needed to help move the plot along, and that adds to the depth of the story. 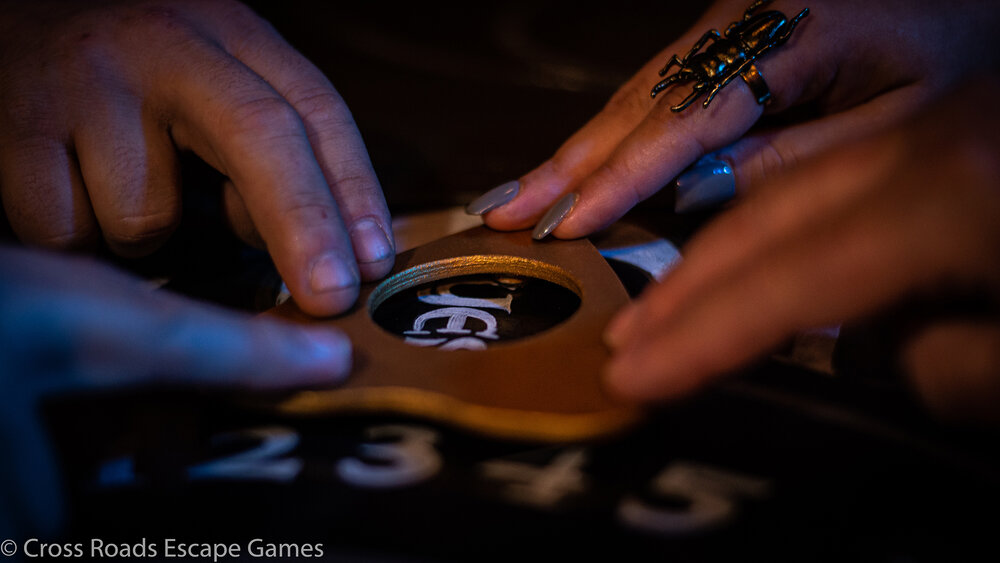 Just about the only qualm that felt noticeable was the somewhat drawn out amount of time needed to set up the plot and premise of the story. The first five or ten minutes involve a significant amount of monologue explaining the set-up of the room, the manner of supernatural contact, the responsibilities of everyone present, and even a reading of each person in a manner that establishes identities and sets attributes for later callback. Although it did make sense in the grand scheme of the show to have all of this knowledge, it did mean that it took a little while for the action to kick in.

Fortunately, once the excitement began, it was non-stop all the way through the end. The tasks, the reveals, and the dark manifestations meant that everyone was on their toes in rapt attention. The scares incorporated into the show were also creative and entertaining. A mix of subtle startles, ghostly creeps, and overt jump scares contributed to the “haunt” side of the attraction, connecting it more with the spirit of the holiday. And the final act of defense really invoked a cinematic sense of culmination to bring a dramatic close the narrative. 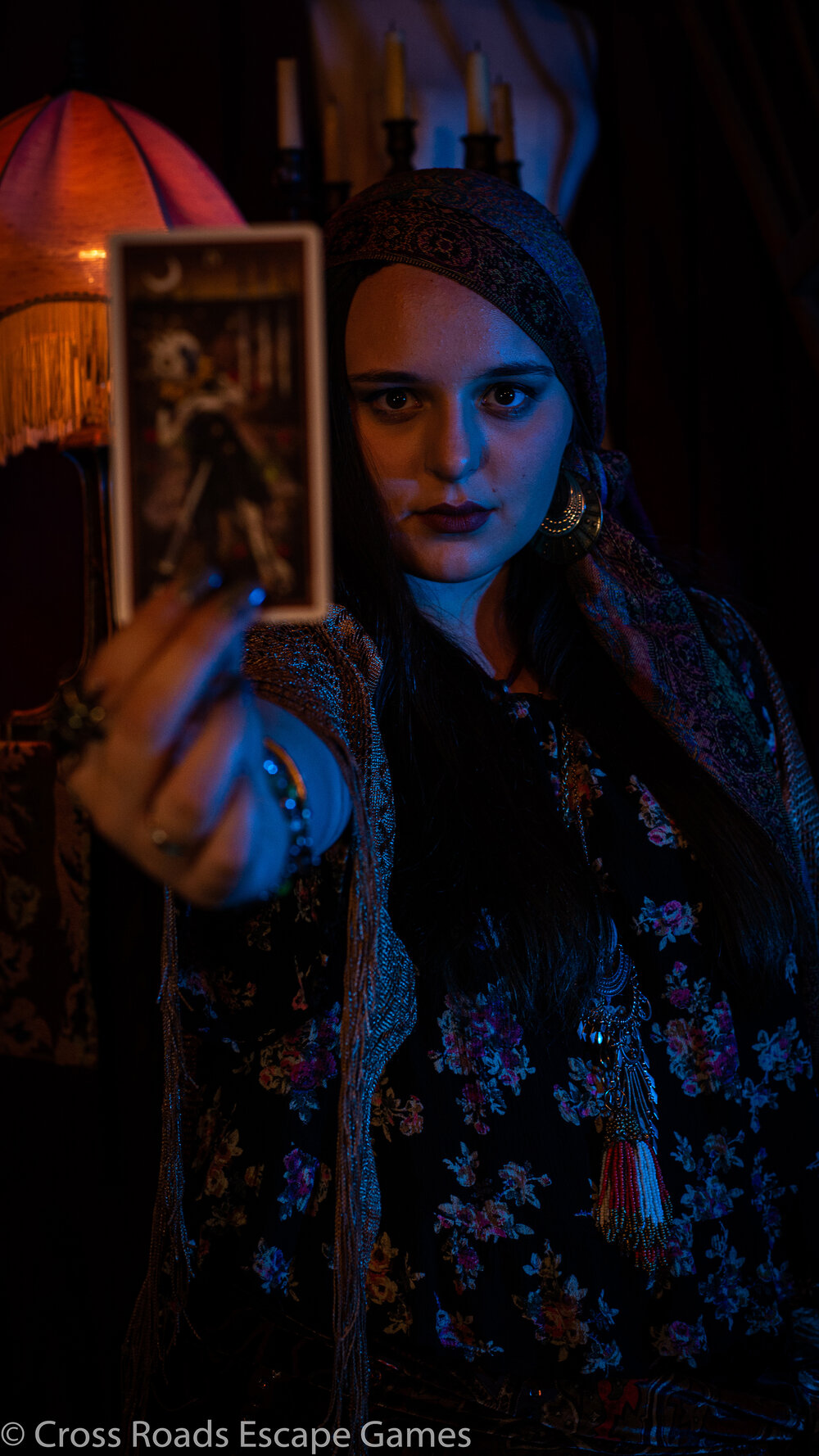 The Séance provides a stirring debut from Cross Roads Escape Games into the immersive theater world. Small in scale but elaborate in execution, it’s a thoroughly and fantastically impressive and fun branching out of Cross Roads’ traditional medium. The show is a terrific alternate mode of entertainment this Halloween season for those looking for more than just the traditional haunted house spook.

The Séance runs 6 - 8 showings each day, Wednesdays through Sundays, from now through Sunday, November 3rd. Tickets can be purchased directly online. Go book your experience now!