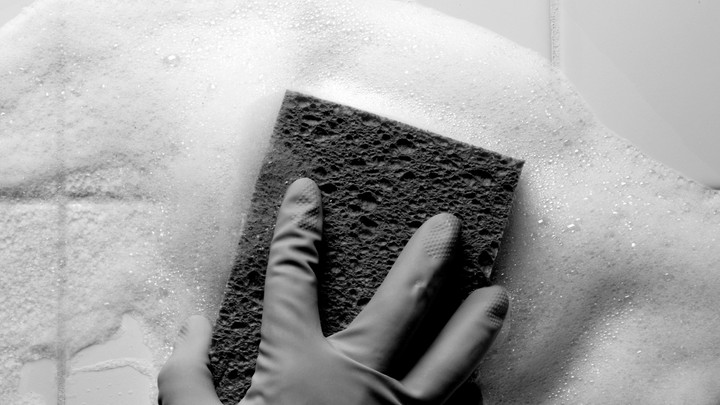 You Can Stop Scrubbing Your Mail Now

As a COVID-19 summer surge sweeps the country, deep cleans are all the rage.

National restaurants such as Applebee’s are deputizing sanitation czars to oversee the constant scrubbing of window ledges, menus, and high chairs. The gym chain Planet Fitness is boasting in ads that “there’s no surface we won’t sanitize, no machine we won’t scrub.” New York City is shutting down its subway system every night, for the first time in its 116-year history, to blast the seats, walls, and poles with a variety of antiseptic weaponry, including electrostatic disinfectant sprays. And in Wauchula, Florida, the local government gave one resident permission to spray the town with hydrogen peroxide as he saw fit. “I think every city in the damn United States needs to be doing it," he said.

To some American companies and Florida men, COVID-19 is apparently a war that will be won through antimicrobial blasting, to ensure that pathogens are banished from every square inch of America’s surface area.

But what if this is all just a huge waste of time?

In May, the Centers for Disease Control and Prevention updated its guidelines to clarify that while COVID-19 spreads easily among speakers and sneezers in close encounters, touching a surface “isn’t thought to be the main way the virus spreads.” Other scientists have reached a more forceful conclusion. “Surface transmission of COVID-19 is not justified at all by the science,” Emanuel Goldman, a microbiology professor at Rutgers New Jersey Medical School, told me. He also emphasized the primacy of airborne person-to-person transmission.

There is a historical echo here. After 9/11, physical security became a national obsession, especially in airports, where the Transportation Security Administration patted down the crotches of innumerable grandmothers for possible explosives. My colleague Jim Fallows repeatedly referred to this wasteful bonanza as “security theater.”

COVID-19 has reawakened America’s spirit of misdirected anxiety, inspiring businesses and families to obsess over risk-reduction rituals that make us feel safer but don’t actually do much to reduce risk—even as more dangerous activities are still allowed. This is hygiene theater.

Scientists still don’t have a perfect grip on COVID-19—they don’t know where exactly it came from, how exactly to treat it, or how long immunity lasts.

But in the past few months, scientists have converged on a theory of how this disease travels: via air. The disease typically spreads among people through large droplets expelled in sneezes and coughs, or through smaller aerosolized droplets, as from conversations, during which saliva spray can linger in the air.

[Read: You’re showering too much]

Surface transmission—from touching doorknobs, mail, food-delivery packages, and subways poles—seems quite rare. (Quite rare isn’t the same as impossible: The scientists I spoke with constantly repeated the phrase “people should still wash their hands.”) The difference may be a simple matter of time. In the hours that can elapse between, say, Person 1 coughing on her hand and using it to push open a door and Person 2 touching the same door and rubbing his eye, the virus particles from the initial cough may have sufficiently deteriorated.

The fact that surface areas—or “fomites,” in medical jargon—are less likely to convey the virus might seem counterintuitive to people who have internalized certain notions of grimy germs, or who read many news articles in March about the danger of COVID-contaminated food. Backing up those scary stories were several U.S. studies that found that COVID-19 particles could survive on surfaces for many hours and even days.

But in a July article in the medical journal The Lancet, Goldman excoriated those conclusions. All those studies that made COVID-19 seem likely to live for days on metal and paper bags were based on unrealistically strong concentrations of the virus. As he explained to me, as many as 100 people would need to sneeze on the same area of a table to mimic some of their experimental conditions. The studies “stacked the deck to get a result that bears no resemblance to the real world," Goldman said.

A good case study of how the coronavirus spreads, and does not spread, is the famous March outbreak in a mixed-use skyscraper in Seoul, South Korea. On one side of the 11th floor of the building, about half the members of a chatty call center got sick. But less than 1 percent of the remainder of the building contracted COVID-19, even though more than 1,000 workers and residents shared elevators and were surely touching the same buttons within minutes of one another. “The call-center case is a great example,” says Donald Schaffner, a food-microbiology professor who studies disease contamination at Rutgers University. “You had clear airborne transmission with many, many opportunities for mass fomite transmission in the same place. But we just didn’t see it.” Schaffner told me, “In the entire peer-reviewed COVID-19 literature, I’ve found maybe one truly plausible report, in Singapore, of fomite transmission. And even there, it is not a slam-dunk case. ”

The scientists I spoke with emphasized that people should still wash their hands, avoid touching their face when they’ve recently been in public areas, and even use gloves in certain high-contact jobs. They also said deep cleans were perfectly justified in hospitals. But they pointed out that the excesses of hygiene theater have negative consequences.

For one thing, an obsession with contaminated surfaces distracts from more effective ways to combat COVID-19. “People have prevention fatigue,” Goldman told me. “They’re exhausted by all the information we’re throwing at them. We have to communicate priorities clearly; otherwise, they’ll be overloaded.”

Hygiene theater can take limited resources away from more important goals. Goldman shared with me an email he had received from a New Jersey teacher after his Lancet article came out. She said her local schools had considered shutting one day each week for “deep cleaning.” At a time when returning to school will require herculean efforts from teachers and extraordinary ingenuity from administrators to keep kids safely distanced, setting aside entire days to clean surfaces would be a pitiful waste of time and scarce local tax revenue.

New York City’s decision to spend lavishly on power scrubbing its subways shows how absurd hygiene theater can be, in practice. As the city’s transit authority considers reduced service and layoffs to offset declines in ticket revenue, it is on pace to spend more than $100 million this year on new cleaning practices and disinfectants. Money that could be spent on distributing masks, or on PSA campaigns about distancing, or actual subway service, is being poured into antiseptic experiments that might be entirely unnecessary. Worst of all, these cleaning sessions shut down trains for hours in the early morning, hurting countless late-night workers and early-morning commuters.

As long as people wear masks and don’t lick one another, New York’s subway-germ panic seems irrational. In Japan, ridership has returned to normal, and outbreaks traced to its famously crowded public transit system have been so scarce that the Japanese virologist Hitoshi Oshitani concluded, in an email to The Atlantic, that “transmission on the train is not common.” Like airline travelers forced to wait forever in line so that septuagenarians can get a pat down for underwear bombs, New Yorkers are being inconvenienced in the interest of eliminating a vanishingly small risk.

[Janette Sadik-Khan and Seth Solomonow: Fear of public transit got ahead of the evidence]

Finally, and most important, hygiene theater builds a false sense of security, which can ironically lead to more infections. Many bars, indoor restaurants, and gyms, where patrons are huffing and puffing each other’s stale air, shouldn’t be open at all. They should be shut down and bailed out by the government until the pandemic is under control. No amount of soap and bleach changes this calculation.

Instead, many of these establishments are boasting about their cleaning practices while inviting strangers into unventilated indoor spaces to share one another’s microbial exhalations. This logic is warped. It completely misrepresents the nature of an airborne threat. It’s as if an oceanside town stalked by a frenzy of ravenous sharks urged people to return to the beach by saying, We care about your health and safety, so we’ve reinforced the boardwalk with concrete. Lovely, now people can sturdily walk into the ocean and be separated from their limbs.

By funneling our anxieties into empty cleaning rituals, we lose focus on the more common modes of COVID-19 transmission and the most crucial policies to stop this plague. “My point is not to relax, but rather to focus on what matters and what works,” Goldman said. “Masks, social distancing, and moving activities outdoors. That’s it. That’s how we protect ourselves. That’s how we beat this thing.”

You Can Stop Scrubbing Your Mail Now