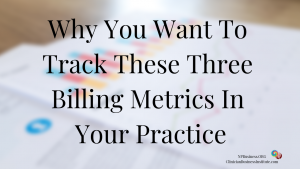 How many patients do you see on average?

I’m sure you’d have the answer on the spot.

Now let me ask you…

That’s a bit more difficult to answer, would you agree?

And that’s the reason many practice owners don’t know these numbers. Instead of naked numbers, they have guesstimates.

They Know Their Metrics

But then there are those who know their metrics; they’ve made a habit of tracking and measuring their numbers.

It’s a habit that pays off and sets them apart from other practice owners. And, in all likeliness, this little habit also leads to greater financial success.

You see, if you don’t know the metrics for your practice is like walking with a blindfold over your eyes. And since you can’t see, you can’t avoid falling off the curb or stepping in a puddle of water.

In your practice, it may look like this. You can’t tell when you’re not getting paid on time. You don’t know reimbursements are not what they should be, or that your money is stuck in A/R.

And over time, it could lead to serious cash flow issues for your practice.  You know you’re busy seeing patients, but you don’t have enough money in your bank account or worse, you’re struggling to pay the bills.

Is it not time to take that blindfold off?

But why is it that some practice owners track their metrics and others don’t?

It may be because some belief:

More often than not, these assumptions are incorrect. Because it doesn’t have to be time-consuming or difficult to track the numbers for your business.

But now, let’s get to three billing metrics you want to track in your practice. If you don’t track anything else, consider monitoring the following:

This number tracks how long it takes to get paid, on average, for the services you provide. The lower the number, the better.

Averages depend on your specialty and payer mix; some payers reimburse faster than others. Be sure to monitor this number ongoing. You want to spot changes in claims submission and reimbursement practices before they become a problem.

In general, numbers around 30 to 40 days are acceptable. Lower numbers are preferred!

Percentage of A/R over 120 days

This metric represents the amount of receivables “stuck” in A/R past 120 days. This number indicates your ability to collect payments in a timely manner.

In an ideal world, there wouldn’t be anything outstanding past 120 days; but real life is a different story. Industry averages suggest that A/R greater than 120 should not go past 10% to 20%.

Unless everybody pays at the time of service, there will always be some percentage of receivables in A/R. The question is how long it will stay there, and in which bucket?

Numbers above 50-60 and higher should get your attention. For one, when claims or other receivables are outstanding for extended periods, they become more difficult to collect. And in some cases, timely filing limits will be exceeded.

Naturally, you want the percentages in A/R as low as possible. If the numbers in the higher buckets (60, 90, and even 120) are increasing, it points to problems with billing and or collections practices, and you want to take corrective action at once.

This number reflects the percentage of claims paid after being submitted only once; it’s the ideal scenario.

The First Pass Resolution Rate indicates how effectively your office or billing company manages the entire revenue cycle process. It includes everything from obtaining insurance verification and authorizations, to proper coding and billing.

It’s a number you want to see as high as possible; industry averages suggest 90% or greater.

And here is a bonus metric for you…

It tracks how much of patient responsibility is collected at the time of service and amounts not collected, the failure rate. Included are the collection of co-pays, deductibles, and co-insurance.

You want the collection rate as high as possible, and the failure rate as low as possible. Try to collect as much of patient responsibility at the time of service as you can. In general, once someone has left your office, the chances of receiving payment decline over time.

While front-desk collections may seem negligible, consider this…

Let’s assume you see 3000 patients over the course of a year (a conservative figure) with an average co-pay of $20.

This translates to a total of $60,000 of cash in co-pays and does not include deductibles or co-insurance. And even if just 10% of co-pays are not collected, it adds up quickly. You would miss out on $6,000 of revenue by not collecting these co-pays.

Failure to collect at the front-desk is expensive. Train and coach your employees, so they understand the importance of collecting patient responsibility at the time of service.

If a practice owner wants to build and sustain a profitable practice, it’s vital to track financial performance; tracking billing metrics is part of it.

If you don’t track any billing metrics now, choose the one or two most meaningful to your situation and start to track them. Look for trends and red flags, and deal with them before they can get the better of you.

You can get the metrics from your billing or practice management software. Almost all billing programs include some level of reporting, and many are customizable.

Alternatively, ask your billing company for a set of reports; request the billing reports regularly and review them carefully. Put a system in place that will help you review the metrics regularly.

And don’t rely on someone else doing it for you! Don’t assume your biller or billing company will alert you to red flags. While it’s reasonable to assume they should, it doesn’t always happen.

In the end, it’s your responsibility!

Which billing metrics do track in your practice? Let us know in the comment section below.

By Johanna Hofmann, MBA, LAc; regular contributor to the NPBusiness blog and author of “Smart Business Planning for Clinicians.“

The post Why You Want To Track These Three Billing Metrics In Your Practice appeared first on Nurse Practitioners in Business.