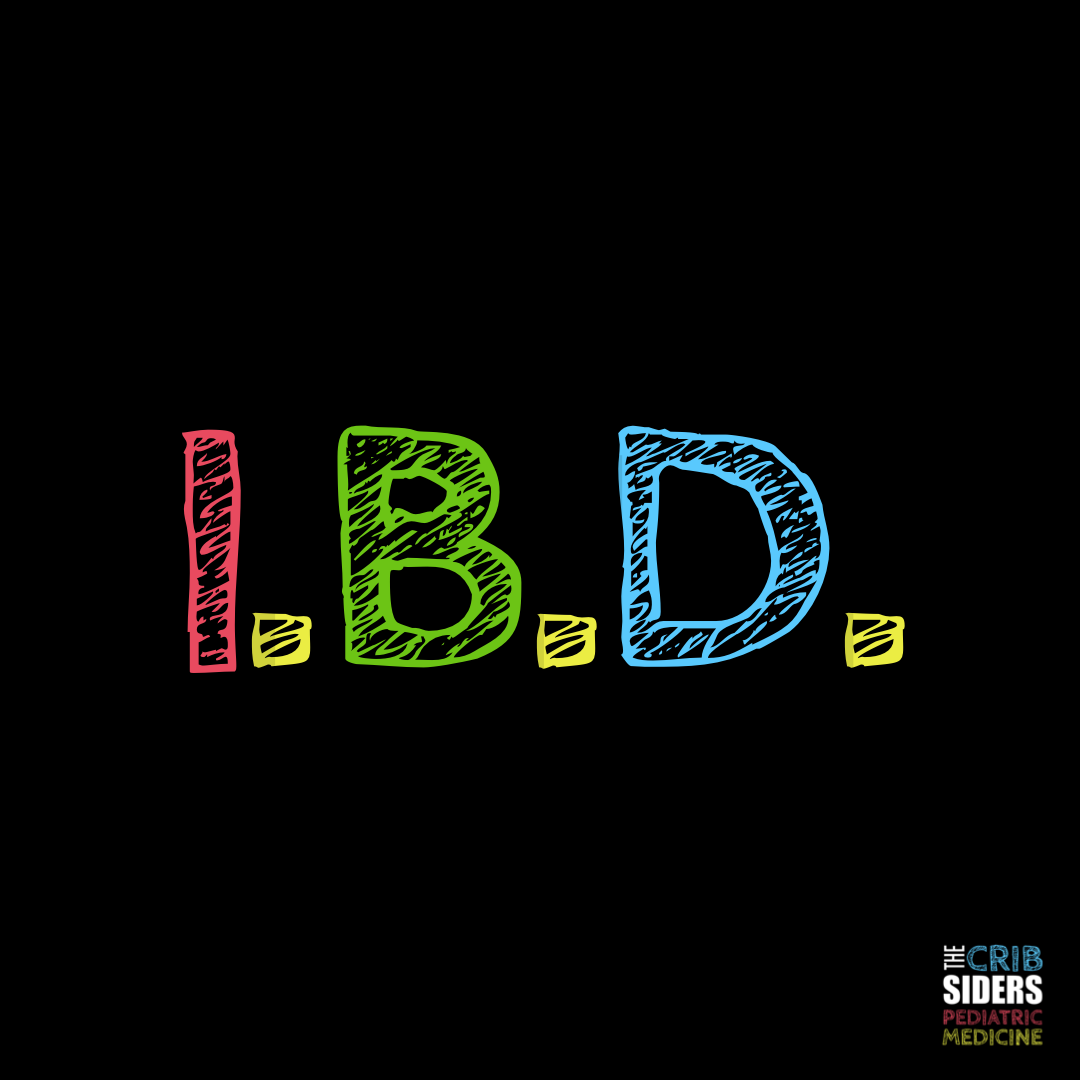 Would you like to be a part of The Cribisders? We’d love to have you! As we’re expanding, we’re looking to add to our production team. If you’re interested, please write to us at thecribsiders@gmail.com with a paragraph detailing why you would like to be on the show and a pilot script. The script should be a clinical vignette with approximately 10 questions to help take our expert on a deep dive through a core pediatric topic.

Looking forward to hearing from you,

Scope out our conversation about Crohn’s and Ulcerative Colitis 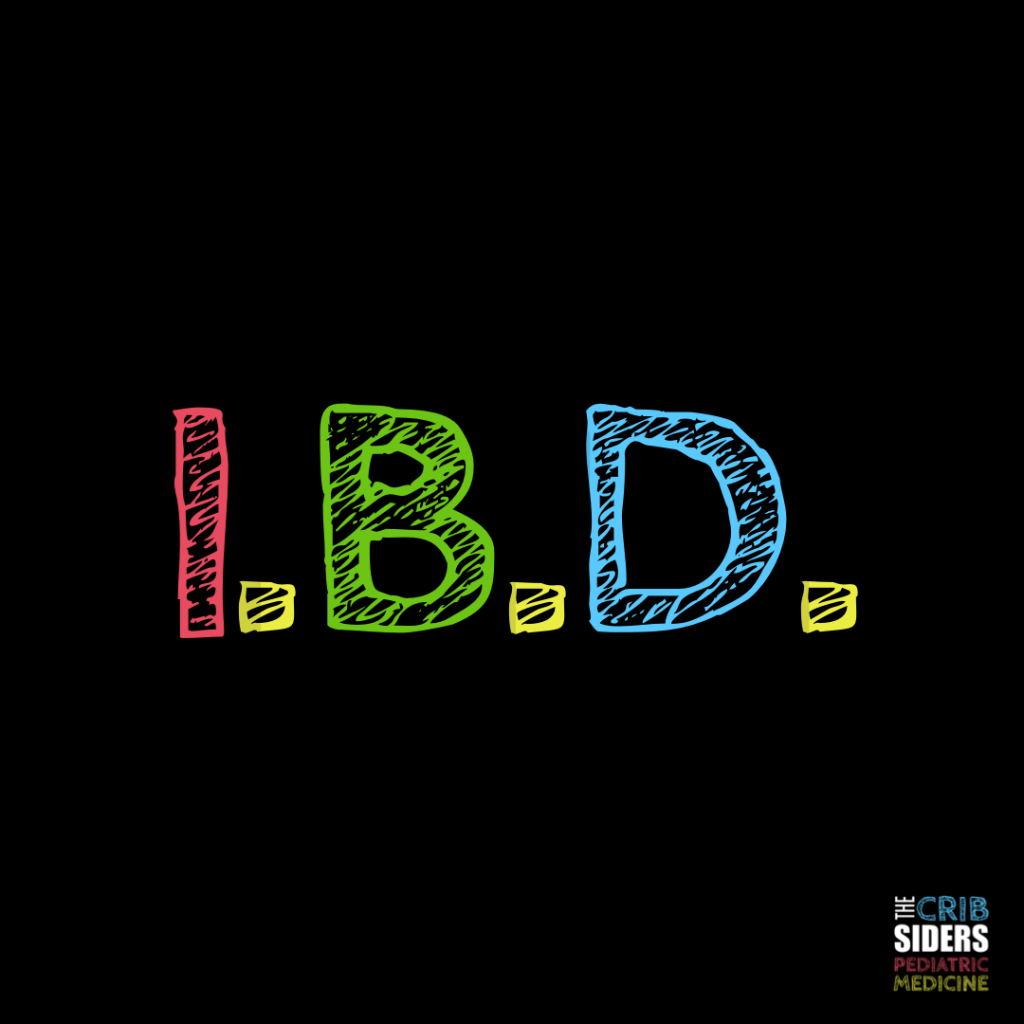 with our guest, Dr. Ghassan Wahbeh, a pediatric gastroenterologist and director of the IBD center at Seattle Children’s Hospital. Hear his take on what to consider when suspecting inflammatory bowel disease, the best tests to tee up the diagnosis quickly, and the ever-expanding treatment options. This episode is sure to make a splash! 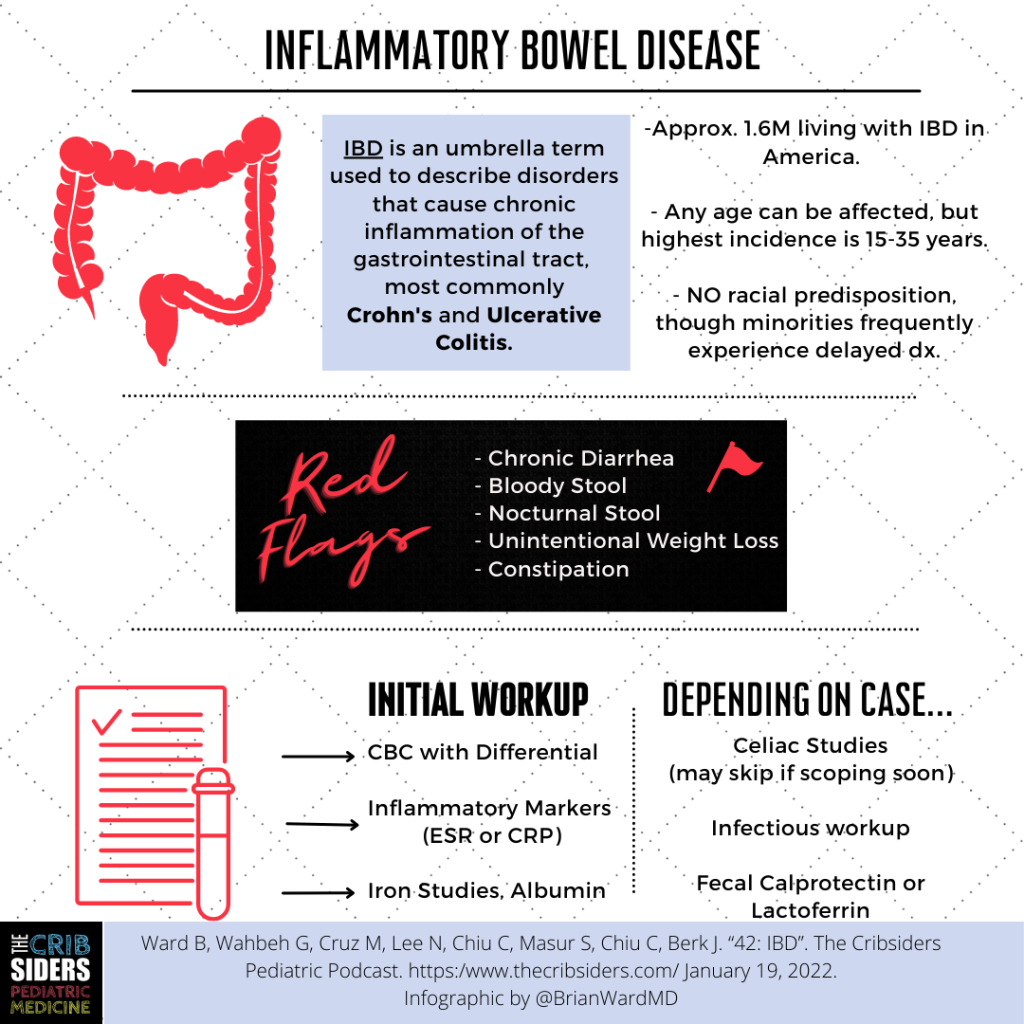 We are excited to announce that the Cribsiders are now partnering with VCU Health Continuing Education to offer continuing education credits for physicians and other healthcare professionals. Check out cribsiders.vcuhealth.org and create your FREE account!

Inflammatory Bowel Disease: an umbrella term used to describe disorders that cause chronic inflammation of the gastrointestinal tract, most often Crohn’s and Ulcerative Colitis(UC). While very similar, Crohn’s and UC differ in a number of ways:

IBD includes a large spectrum of overlapping phenotypes. Instead of limiting the diagnosis to either Crohn’s or UC, Dr. Wahbeh likes to describe inflammatory patterns as personal to each patient (expert practice).

The cause of IBD is unknown and likely multifactorial. There is a moderate genetic link, with twin concordance of Crohn’s disease between 35 and 50%. About half of patients with Crohn’s disease have a family member with the same diagnosis. Families should be reassured that they did not do anything wrong to lead to this process.

Incidence is bimodal by age, with peaks at 10-20 yrs old and 20-40 years old, but people of any age can be diagnosed with IBD.

While IBD affects different subgroups of the population (including race and socioeconimic status [SES]) at the same rate, studies have shown a delay in diagnosis for African-American or Black identifying patients, as well as a delay in initiating the most effective treatments for groups of lower income.

An Incomplete Differential Diagnosis for IBD

While the list of differential diagnoses to consider is long, the following are important disease processes that you should consider and/or rule-out when evaluating for IBD.

Less High Value, but May be Warranted

The Ins and Outs of Endoscopy

Timeline of when to scope should be based on severity of symptoms as well as lab tests. Some children with high levels of anemia, uncontrollable pain, or challenges keeping up with hydration may require admission and next-day scope.

Kashlack Children’s aims for performing endoscopy within 1-2 weeks, but institutional practices may vary.

Waiting for a scope can be a very anxious time for a family. Make sure to reassure them, when appropriate. Though very serious and challenging for patients and families, IBD is rarely life-threatening.

Noncaseating granuloma (collection of coalescing macrophages) are the hallmark of Crohn’s.

There can be histologic inflammation in areas that look grossly normal on scope.

Starting medications: Get in the zone, the predni-zone!

Meds will vary based on what is seen on the endoscopy, balancing side effects with the goals of therapy.

The “traditional” treatment model of step-up therapy has generally given way to top-down therapy for a variety of reasons, including:

Improve pain, reduce diarrhea, increase appetite, but they do not induce deep mucosal healing as well as other classes of medications. As Dr. Wahbeh says: “it is a great band-aid”

A molecule similar to aspirin, this acts as a topical anti-inflammatory. Good for isolated colonic inflammation. The many formulations of mesalamine are based on where the medication will “release” in the gut. There are no head-to-head trials among mesalamines.

Medications like azathioprine and mercaptopurine can be used at moderate doses to decrease immune activity and thereby lessen intestinal inflammation.

Since their introduction almost 30 years ago, they have been very successful in IBD care. Infliximab and adalimumab were the first biologic medications for pediatric IBD. Since then, many more have been approved, including certolizumab, golimumab, and vedolizumab.

These medications have a diversity of mechanisms including anti-TNF-alpha, anti-IL12/23, anti-adhesion molecules, etc. Small molecules target specific pathways as well.

The biology of inflammation is not static! As patients take these medications, the character of their inflammation may change, resulting in loss of efficacy or in prolonged deep remission. Little is known about this process.

Diets of complete enteral nutrition with shakes (usually commercial brand shakes) change the antigenic stimulation within the gut and can improve the symptoms and reduce the inflammation. Inflammation reduction from exclusive enteral nutrition has been shown to be similar or even better than corticosteroids.

The goal of children with IBD is remission—biochemical, symptomatic, and mucosal/endoscopic.

Children in remission can live normal lives with minimal restrictions. The medications can cause immunodeficiencies, but children can live generally unrestricted lives with rare exceptions (Dr. Wahbeh might recommend against spelunking or tuberculosis outreach).

COVID vaccine: not contraindicated. If a patient is on a regularly timed medication like a biologic, try to schedule halfway in-between doses, though this is not an evidence-based recommendation.

Listeners will describe when to suspect inflammatory bowel disease, the initial workup, and the basics of IBD management.

After listening to this episode listeners will…

The post #42: Inflammatory Bowel Disease – Go With Your Gut appeared first on The Curbsiders.