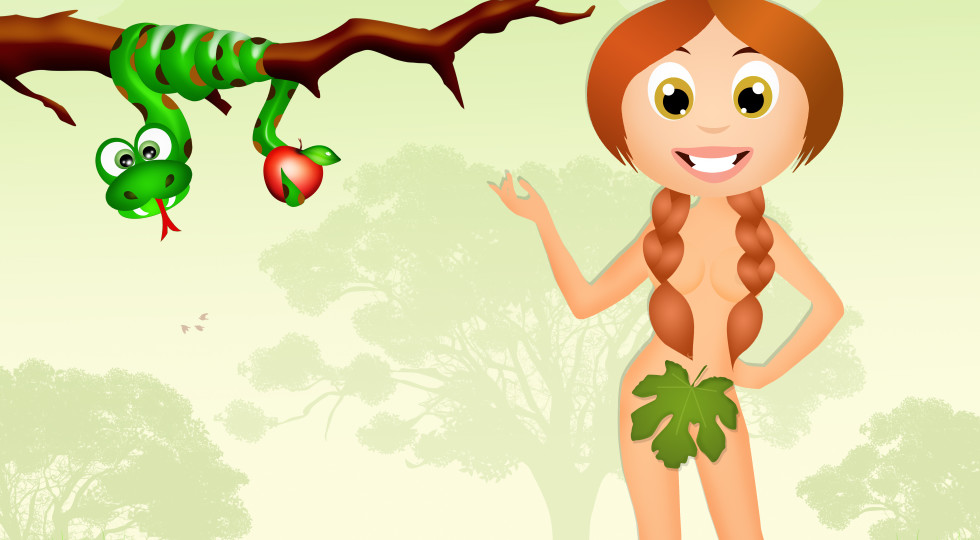 Thanks God for Blaming Eve…Not

Dressed in my cotton print dress with two scratchy crinolines underneath, I hold my mother’s hand as we enter the gathering area for Sunday school classes. After an opening song, we split up by age group. Cautiously, I enter the first grade room. Fortunately, I know at least three kids. Thank heaven! The teacher, Mrs. Johnson, informs us that each week we will learn about a different story from the Bible. I’m just learning to read at public school and love it when someone reads out loud to me. Sunday school sounds like it’s going to be great! I shouldn’t have worried so much.

Both my mother and father have shared some of the stories from the Bible with me and I’ve seen my father open his black leather Bible every night. But coming to church seems different. I’ve been to church before and everyone is quiet when the pastor speaks. I don’t understand much of what he says, so I hope Mrs. Johnson will be easier to understand, just like my teacher at school.

After she asks us to calm down and sit quietly in our chairs, Mrs. Johnson explains the story of Adam and Eve. She skips over the creation of the earth and goes right to the garden part. Eve eats from the forbidden Tree of Knowledge and boy is God mad! She and Adam get kicked out of the Garden of Eden and now Eve becomes the cause of all the sin in the world!

All right, I don’t remember this episode exactly, but it probably happened in a similar manner. There I was, an eager young girl, ready to learn about my faith. And what was I hit with? Women are the cause of all evil. Seriously?

It is hard to underestimate the role that the story of Eve has played in the treatment of women in Western Civilization. She comes to symbolize all that is wrong with humankind. She represents disobedience, pride, arrogance, lust, and sin. While previous patriarchal societies, even those with female deities, had treated women as subordinate to men in terms of property ownership, the right to choose a spouse, and access to education, the portrayal of Eve brings that subordination to a whole new level.

Prior to Israelite monotheism, women weren’t always portrayed as the epitome of evil. Carved clay figurines dating from 25,000 years ago may have symbolized the awe and mystery of new birth. These figurines, mostly female, often with pregnant torsos and pendulant breasts, were found in the living spaces of our hunter-gatherer ancestors. These figurines represented, in all likelihood, the regenerative power of the female, who was responsible for giving birth to new members of the clan. These clay representations were probably used also to promote the fertility of the land when the tribes moved from hunting and gathering to simple agriculture. Referred to as clay pillars, similar female figurines have been found extensively in the area of the Israelites’ settlement in Canaan dating to the 7th and 8th centuries BCE.

Virtually all religions prior to Judaism also had women in them: Greeks had Aphrodite and Artemis; Romans had Minerva, Venus and Diana; and the Babylonians had Ishtar and Ninlil just to name a few. Even the Canaanites worshipped the goddess Asherah along with the male gods Ba’al and El. But this new Israelite religion, the first strictly monotheist religion, is going to be different: no women. Just one god (for now) and he is MALE.

But let’s get back to Eve. Banishment from paradise isn’t the only punishment for Eve. In addition to putting her under the rule of man from this time forward, god tells Eve that she will also endure great pain in childbirth. Instead of venerating fertility as other religions had done, the Bible equates it with sin. In the 1800’s, this passage about punishment of pain for women was used by clerics to attempt to deny women any anesthesia during childbirth![1] What omniscient, omnipotent god would make the wonderful and amazing event of giving birth a painful punishment?

But how about the Christians? Did they carry this story forward? As the followers of Jesus were Jewish, they knew the Tanakh well. Tanakh became what Christians now call the Old Testament. Even though Eve is not mentioned anywhere outside of Genesis, early Christian leaders weren’t going to let go of that imagery or the opportunity to further subordinate women – in the priesthood, in her role in the new church, and in virtually all aspects of their lives. Tertullian, a prolific Christian writer (155-240 CE) in the Roman province of Carthage, was just one of many to expand upon the biblical account of Eve to further denigrate women:

And do you not know that you are Eve? God’s sentence hangs still over all your sex and His punishment weighs down upon you. You are the devil’s gateway; you are she who first violated the forbidden tree and broke the law of God. It was you who coaxed your way around him whom the devil had not the force to attack. With what ease you shattered that image of God: Man! Because of the death you merited, even the Son of God had to die…Woman, you are the gate to hell.[2]

Irenaeus, bishop of Lyons in Gaul (modern-day France) in the second century (ca. 115 – ca. 202 CE) summed it up well, “Eve, having become disobedient, was made the cause of death both for herself and for all the human race.”[3] Epiphanius, bishop of Salamis in Cyprus (ca. 315 – 403 CE) noted ironically:

For Eve was called mother of the living after she had heard the words, “You are dust and to dust you shall return” (Gen. 3:19), in other words, after the fall. It seems odd that she should receive such a grand title after having sinned. Looking at the matter from the outside, one notices that Eve is the one from whom the entire human race took its origin on this earth.[4]

19th century atheist and woman suffragette Elizabeth Cady Stanton commented on the pivotal role this story has played in the subordination of women.

Take the snake, the fruit-tree and the woman from the tableau, and we have no fall, nor frowning Judge, no Inferno, no everlasting punishment – hence no need for a Savior. Thus the bottom falls out of the whole Christian theology. Here is the reason why in all the Biblical researches and high criticisms, the scholars never touch the position of women.[5]

What has been the legacy of this portrayal of the first woman? Women in countries across the globe are still denied access to education and other rights based in part on this story. Remember that each of the three monotheist religions – Judaism, Christianity, and Islam, all support the books of the Old Testament as divinely inspired. Even in the United States, access to education for girls was not commonplace until the late 19th century and that still depended on race and class distinctions. Today, the most vocal opponents to women’s rights to birth control, abortion, and the passage of the Equal Rights Amendment use the Bible as the justification for their views.

Maybe it’s time for women to say no to religion and to recognize the Judeo-Christian tradition not as divinely inspired but as a means for men to dominate women, for men to secure property and power, and for women to keep their place in the private sphere. In the Western World today, women have an opportunity to be equal to men: in the workplace, in the public sphere, and at home. Times have changed. As women, let’s acknowledge the role religion played in the patriarchal society of old as we work to create a society that values men and women equally. Let’s acknowledge it’s time to let go of religion. As Sonia Johnson said after her excommunication by the Mormon Church in 1979: “One of my favorite fantasies is that one Sunday not one single woman, in any country of the world, will go to church. If women simply stop giving our time and energy to the institutions that oppress, they would have to cease to do so.”[6]

P. S. I am always looking for contributions to my blog. If you are interested in writing, you can contact me here.

[1] Gaylor, Annie Laurie. (1981) Woe to the Women: The Bible Tells Me So: The Bible, Female Sexuality, and the Law. Madison, Wisconsin: Freedom from Religion Foundation, p. 65.

[6] Gaylor, Annie Laurie. (1981) Woe to the Women: The Bible Tells Me So: The Bible, Female Sexuality, and the Law. Madison, Wisconsin: Freedom from Religion Foundation, p. 132.

FREE “From Goddess to God – The Elimination of the Female Diety”

Thanks God for Blaming Eve…Not