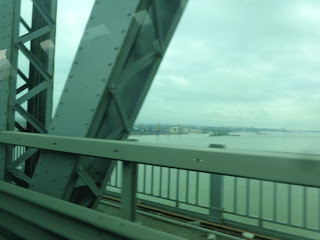 The simplicity of being able to go into Bulgaria (159Cong.Rec.H7452)

When I was writing my travel bucket list before leaving Ukraine, Sofia was near the top. I had been there before, but just to change from a bus to a train, so I felt like I couldn't really cross it off as visited. So I was happily surprised when my host in Romania asked me if I would want to take a day trip from Bucharest into Bulgaria. After boarding a minibus at a downtown hotel, we rode out of the capital and crossed the Danube (top). Just across the border at Ruse, we stopped at Basarbovo Rock Monastery (bottom left), which is, well, a monastery carved into rock formations made by the Rusenski River (bottom right). 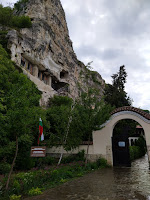 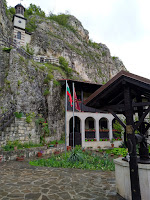 The admission fee gets you permission to climb to the original monastery caves, which contain a chapel, which is still in use (top left), and a crypt, which is also still in use, in a manner of speaking (top right). The caves at ground level have been converted to shrines to various saints (bottom left). They are steps away from a cathedral that has been built on the site, but that remains a work in progress, as illustrated by its unfinished interior walls, which look like color-by-number paintings (bottom right). 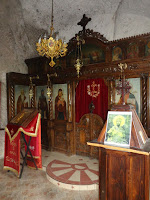 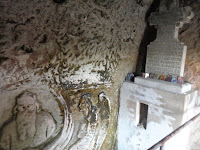 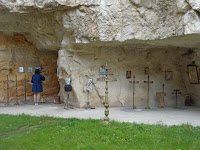 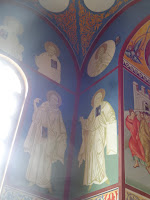 The main destination of our tour was Veliki Tornovo, which, if I am correctly identifying the Slavic roots in the name, refers to something "great" or "dear" (top). Indeed, the city is treasured because archaeological digs at the medieval Tsarevets Fortress have found evidence that the city is one of the oldest in the country (bottom left). Excavations are ongoing at the former castle ruins, which offers wonderful 360-degree views, as well as the nearby hill of Trapezitsa (bottom right). 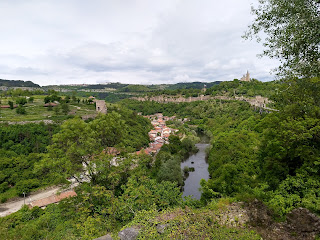 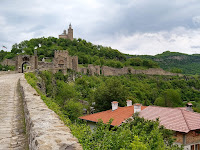 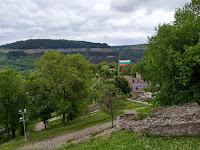 At the apex of the fortress mount sits a re-creation of the rulers' church, which has been rebuilt as a memorial (left). A local artist was commissioned to create icon-like tableaux within, but instead of featuring the acts of saints, the paints depict moments from Bulgarian history (right). The painter even snuck in a small self-portrait in one of the massive artworks. 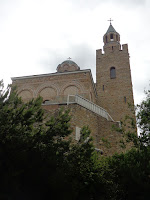 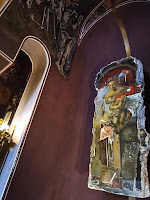 The nearby "old" town is modern compared to the fortress, but still, its centuries-old narrow and windy streets are quaint (top left). If you wander into the courtyards behind the buildings, you'll find even more charm, including what one restaurant proclaims as the largest rose bush in Bulgaria (top right). The streets' shops are full of various craftsmen demonstrating their trade, from throwing pottery to weaving fabric. Many of the shops feature woodworking; one carved an homage to fellow artisans (bottom left). Tradesmen are helping the city move into the current century, but despite its trajectory toward the contemporary, it continues to honor its past, such as with a monument to the Asen Dynasty (bottom right). 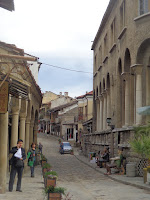 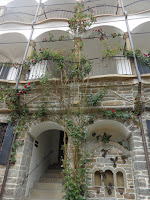 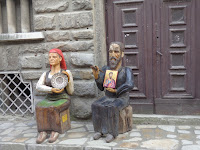 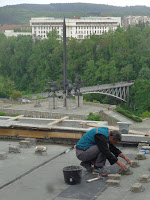 The simplicity of being able to go into Bulgaria (159Cong.Rec.H7452)