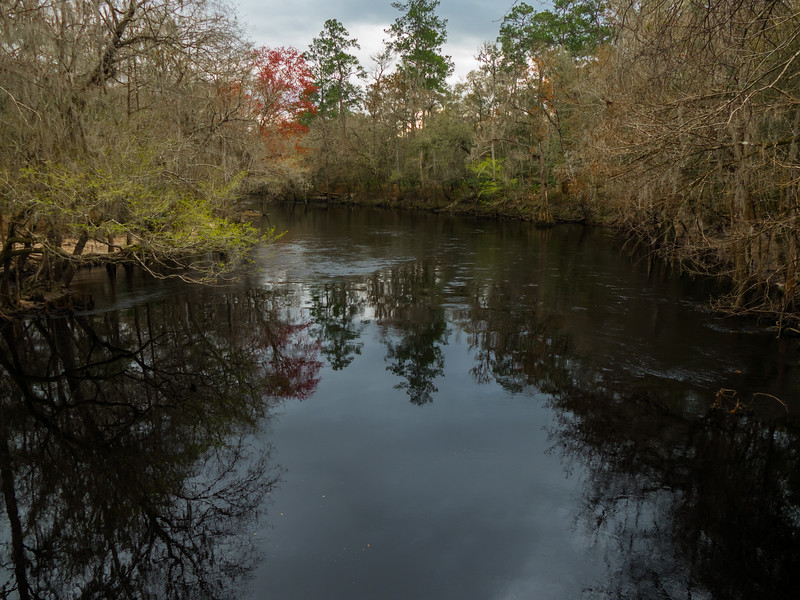 When we first arrived at Oleno, the park seemed quite confusing.  The entry station is a couple of miles from the campground, and I received no  maps or information about the park from the ranger when we checked in.  I discovered later it was because they were temporarily out of maps, but that didn’t help much that first day.

As is often the case with state parks, they are busy and full on the weekends, with young families, kids, dogs, and people coming and going often.  We are in site number 30, toward the end of the loop in the Magnolia campground.  I think these sites must be for short-timers, because our neighbors on both sides have changed on almost a daily basis.

After breakfast on our first morning here, I left Mattie with Mo and decided to try to get the lay of the land a bit on foot.  I left the phone with Mo so that she could have the hotspot for internet and took off down the road on the still cool, overcast morning.

Without a phone OR a map, I was left to my own devices to figure things out.  I did manage to find the main parking lot, and wandered down toward the river.  There are some interpretive signs about that helped a bit.  Oleno is named for the town that once existed here, called Leno.  However that name was changed from the original name of Keno, since some of the later religious inhabitants didn’t think naming a town for a gambling game was a good idea.  The original town was eventually abandoned when the railroad chose to bypass the town in favor of other routes. 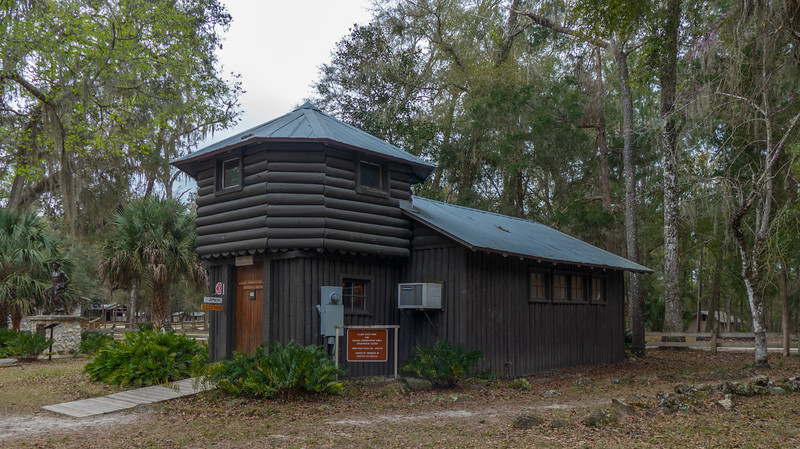 The park also is the location of a CCC training camp, and there is a sweet little museum on the premises with many original photos of the CCC workers, and stories of all they accomplished.  Every time I read about what FDR did with the CCC I am saddened that the same idea can’t be implemented in our country again.  They did so much, and so many young men were saved from a life of poverty, and in the process our infrastructure was enriched.

The natural history of the land here is even more fascinating than that of the town.  The Santa Fe River, spring fed for 76 miles from Putnam County into the Suwannee, disappears into the limestone bedrock and an underground channel at the River Sink here in the park, and rises again a full blown river at River Rise Preserve just 3 miles south.  On that first morning, I was having a hard time appreciating the river and the trail.  The skies were gray, the trees were mostly gray because the leaves hadn’t yet popped, and the river was inky black.

The Santa Fe River goes underground here at the Sink

Still, the trails were quite nice, even without a map, there at least are yellow blazes to mark the River Trail and I found my way to the sink, and then continued on around the mile and a half loop back to the lovely swinging bridge, also built by the CCC.

As the days have passed, and I have walked the River Trail and others in the park, I have come to appreciate the landscape more and more.  It helps that we have had a few sunny days, and that the tiny spring leaves are popping brilliant chartreuse in the sunlight. The long leaf pine forest is alive with birds, even though most of them are hidden and only heard. The palmetto understory is thick and green, and after passing the sink and walking along the land bridge hiding the river beneath me, there are many dark sinkholes and wet spots.  It really is kind of a spooky place, actually.

I have to laugh, because this same river trail just freaks Mattie out completely.  It isn’t a landscape that she is used to and she jumps at every shadow and dark stump that is waiting to get her.  There are snakes, but we haven’t seen even one, and nary a single alligator in any of the low spots along the river.

Speaking of the river, the Santa Fe is my first experience with what is called a blackwater river.  The water is described as tea colored, naturally stained from organic materials, but I would say it is more like black strong coffee.  We originally thought we might kayak the Santa Fe, but that inky water spooks me as much as those inky stumps spook Mattie!  It looks ever so much like thick black ink flowing past me, and the current at this time is quite strong.  I can’t imagine not being able to see a root or a log that hides below that shiny black surface.

One steamy afternoon, Mo and I walked down to the boat launch area on the river and thought we would put our feet in the water just to cool off.  That water was so spooky I could barely put my feet in it, much less any of my body.  No way!  The muddy banks thick with cypress knees don’t make the river all that inviting, and the evening no-see-ums, and the see-ums, and a few mosquitoes didn’t help.  We didn’t stay long, but it was a chance for Mo to walk a little bit, see the bridge and visit the CCC museum.

I have wandered off along several trails to discover that I was wandering off into basically nowhere, and it is really easy to get lost in this forest, especially on a cloudy day. Again, no phone, no map, no GPS, just me and the dog and our spooky instincts to guide us.  Having worked in the woods for so many decades helps a bit, and I am pretty good at navigating out west, but here in the flat east my sense of direction is a bit wonky.  I was delighted yesterday afternoon when there was some bright sunshine to help give me a sense of place as I explored one more new trail.

We have had a pleasant week here at Oleno.  Our neighbors have been mostly quiet, and without spooky dogs, except for this last couple who landed yesterday with their big dogs and no leashes.  I pick up Mattie as I approach the MoHo and so far so good, those dogs haven’t tried to come over here, but they do bark, and they have big barks.

Next up: a drive to Gainesville for an interesting afternoon at the Sweetwater Wetland Preserve, enjoying supper at the Diner in High Springs, swimming on a hot afternoon at Ichetucknee Springs, and of course, the highlight of the week, kayaking the Ichetucknee River.