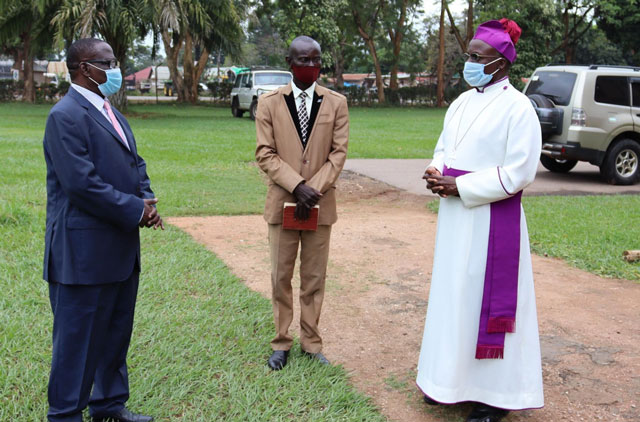 Luweero, Uganda |  THE INDEPENDENT  |  Katikamu North Member of Parliament Abraham Byandala has appeared before detectives at Luwero Central Police Station to defend himself over a fraud scandal that has rocked the executive members of the National Resistance Movement Party in Luwero.

The members are under investigation over the alleged fraud after they allegedly embezzled 29 million Shillings which has been allocated as facilitation for candidates who were contesting for District Councillor seats.

Byandala, the Luwero NRM District Party Executive Treasurer explained that signed a cheque of 30 million Shillings where 29 million shillings was for the flagbearers to facilitate agents and one million Shillings for administrators to mobilize for the elections.

He added that a cheque was given to Zenar Nasur, the District NRM Vice-Chairperson and Wasswa Tamale, the Publicity Secretary to withdraw the money and hand it over to flagbearers. However, he says, he was shocked to learn much later, that the officials never released the money for the intended purpose.

Byandala who appeared before detectives on Wednesday evening submitted bank statements indicating that the money was released by the bank. He recorded the statement to aid investigations on fraud at Luwero Central Police Station and was later released on Police bond.

Byandala told URN after recording a statement that he now regrets why he didn’t resign the task of treasury before the elections to save his name which is now covered in a fraud scandal yet he performed his duty to authorize the payments.

Isah Semwogerere, the Savannah Regional Police Spokesperson told URN that Police is hunting for Nasur and Wasswa to defend themselves over the accusations.

Recently Zenar Nasur, the NRM Vice Chairperson told URN that she withdrew the money and used it for mobilization for Local Government elections. Nasur adds that she got the circular after using the money and shared the accountability with the NRM secretariat.

URN has also learnt that money which the NRM party released for village chairpersons in Luwero town and district women councils to campaign for President Yoweri Museveni didn’t reach the intended mobilisers. Up to 27million Shillings which was meant to facilitate 606 youths village flagbearers was reportedly stolen in Luwero in August 2020.

Byandala lost the parliamentary bid during the NRM primaries after serving for three terms as the Katikamu North MP.