Amazon Is Spying on Its Workers in Closed Facebook Groups, Internal Reports Show

Amazon is monitoring the conversations of Amazon Flex drivers in dozens of private Facebook groups in the United States, the United Kingdom, and Spain, according to an internal web tool and reports left on the open internet and viewed by Motherboard. According to the files left online, Amazon corporate employees are getting regular reports about the social media posts of its Flex drivers on nominally private pages, and are using these reports to diagnose problems as well as monitor, for example, drivers "planning for any strike or protest against Amazon."

Among the files left online is a document called “social media monitoring” that lists closed Amazon Flex Driver Facebook groups and websites across the world, as well as open Flex driver Subreddits, and the Twitter keyword "Amazon Flex." Forty three of the Facebook groups are run by drivers in different cities in the United States.

Amazon seemingly asked employees to keep this monitoring secret. A login page included in the files says “the information related to different posts reported out from various social forums are classified. DO NOT SHARE without proper authentication. Most of the Post/Comment screenshots within the site are from closed Facebook groups. It will have a detrimental effect if it falls within the reach of any of our Delivery partners. DO NOT SHARE without proper authentication.” (An entire list of the social media pages being monitored is embedded below.) 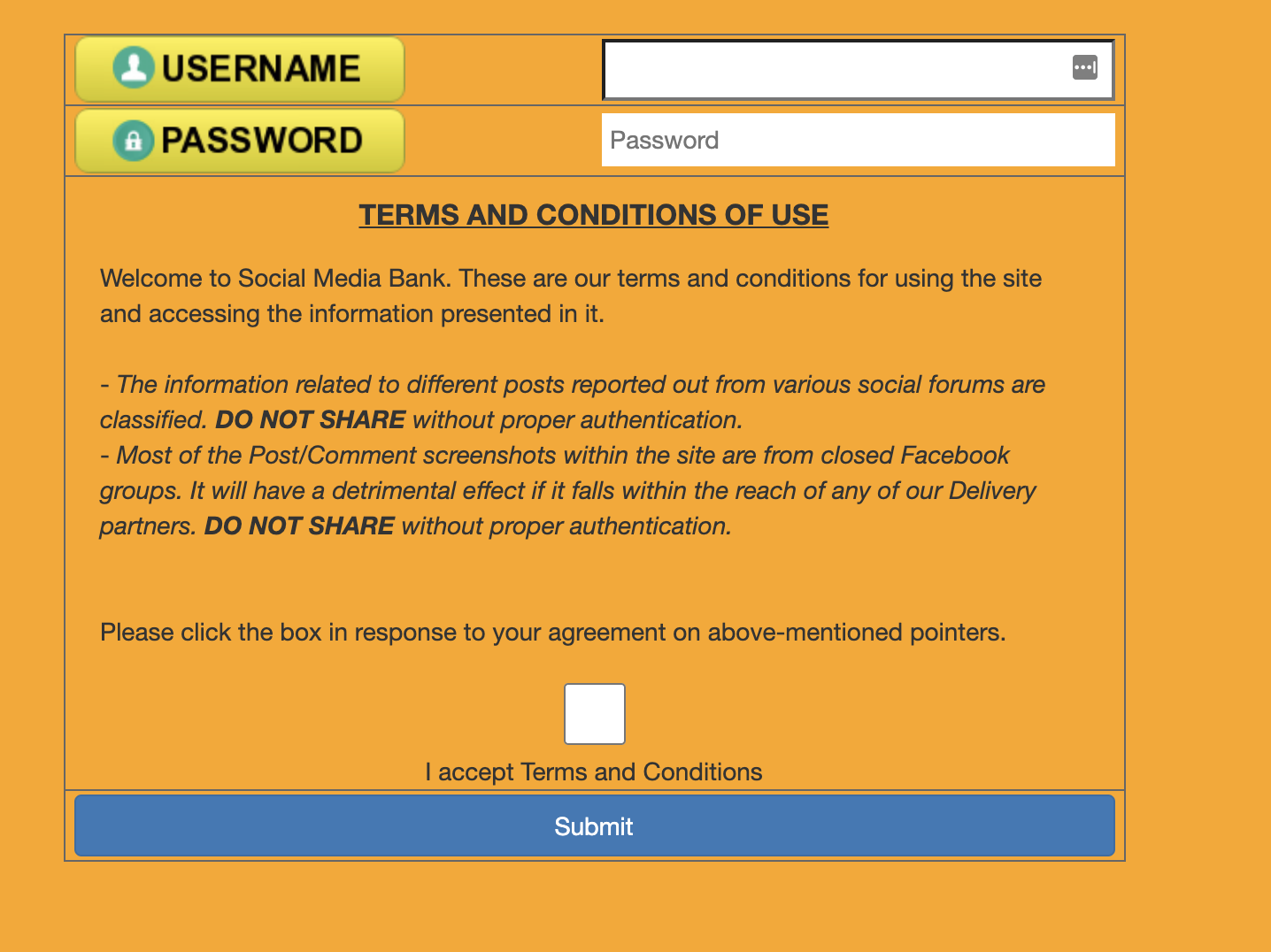 These posts are monitored by something called the "Advocacy Operations Social Listening Team," according to one document on the website titled "Social Listening SOP." According to that document, people on the listening team are supposed to "capture posts" written by Amazon Flex drivers, who are known as "Delivery Partners" or "DPs", categorize them, investigate them (or flag them for investigation), and add them to a report. 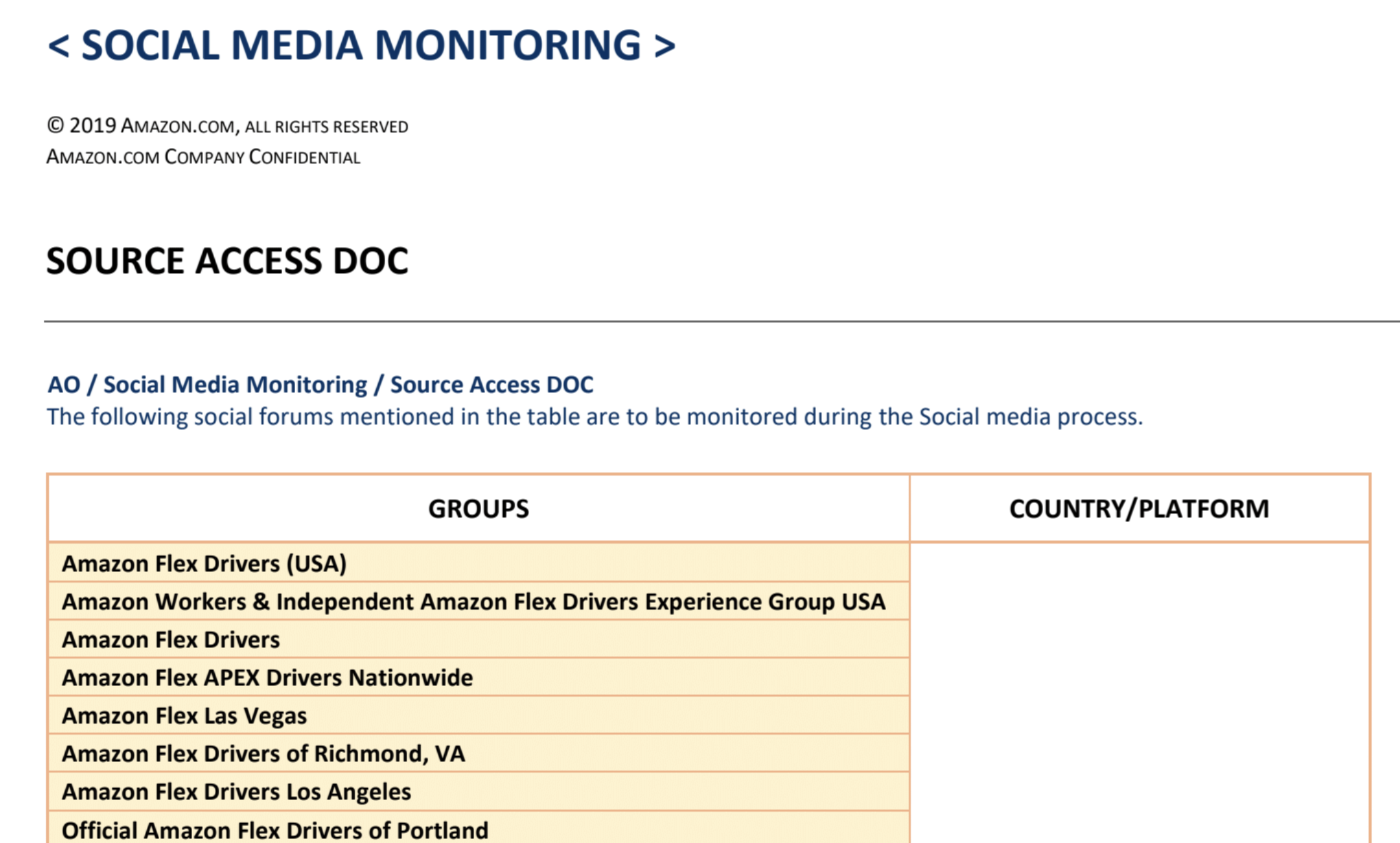 Posts can be monitored in real time on a Live tool, and are sorted into one of dozens of different categories, including “App Issue,” “Media Coverage,” “Marketing,” “DP Feedback,” and a host of others. Each of these categories have further subcategories that become more specific and refer to issues drivers may face, such as dealing with an unruly customer, an unhelpful Amazon support staffer, app and GPS issues, and dozens of others.

The documents show that Amazon is systematically monitoring, categorizing, and analyzing the nominally closed social media pages utilized by their Flex Drivers, who are independent contractors who deliver packages and groceries for Amazon and Whole Foods in more than 50 cities across the United States and in several other countries. These workers use their own vehicles. As independent contractors, Amazon Flex drivers do not receive healthcare benefits, sick pay, overtime pay, worker's compensation or other benefits guaranteed to Amazon employees. Amazon also relies on contracted workers employed by small companies, known as delivery service partners, to deliver packages.

Closed Facebook groups have been used by gig workers who work for a wide swath of companies to organize labor actions and strikes across vast, disjointed workforces. 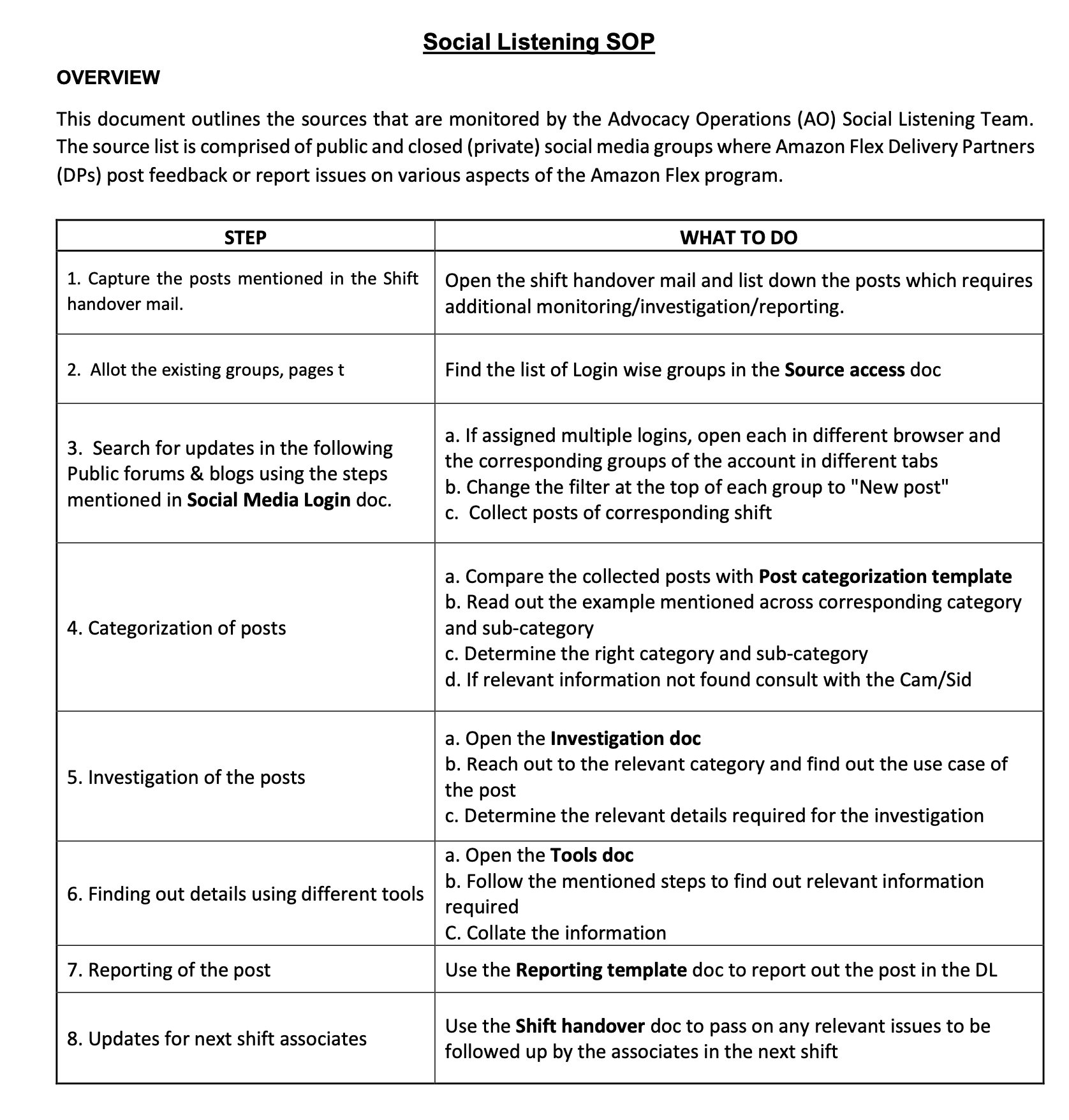 Issues raised by the drivers are compiled into reports that detail specific posts and the action that resulted at Amazon corporate from it, which are delivered to some Amazon corporate employees. Some posts are “escalated” to various teams and Amazon leadership to look into. According to the reports that were left online, the majority of the issues are seemingly tracked to get a sense of the problems that are happening on the app or with the Amazon Flex program, so that Amazon can fix them. For example, one Flex driver posted that they were asked to drop off packages on two separate continents. That post was captured by the tool and was escalated to Flex leadership.

But other posts identify Flex workers who posted negative media articles, "complaints" from drivers and the perceived sentiment of their posts ("positive" or "complaint"). Categories of possible posts Amazon wants to know about include news articles where "Warehouse employees [are] complaining about the poor working condition," "Strikes/Protests: DPs planning for any strike or protest against Amazon," and a category called "DP approached by researchers - DPs being approached by researchers for their project/thesis." Other categories are designed to identify posts where workers are "complaining about Amazon taking away their tips," and any bots or gaming of the system drivers are using to get more shifts.

"[Delivery Partners] constantly mentioned their unhappiness around the block rates along with the surge price," one report stated. Another analysis in one of the reports noted that drivers were upset they were no longer getting as many "blocks," or delivery shifts.

"DPs were complaining of not receiving blocks," the report said. "Many were of the view that the block count has reduced since the holiday and the volume is being taken away by white vans. They are confirming it by asking the station staff. Few have also opined that the decrease in the offers have been noticed not at all stations. Some are definitely being impacted while the rest are just working fine." 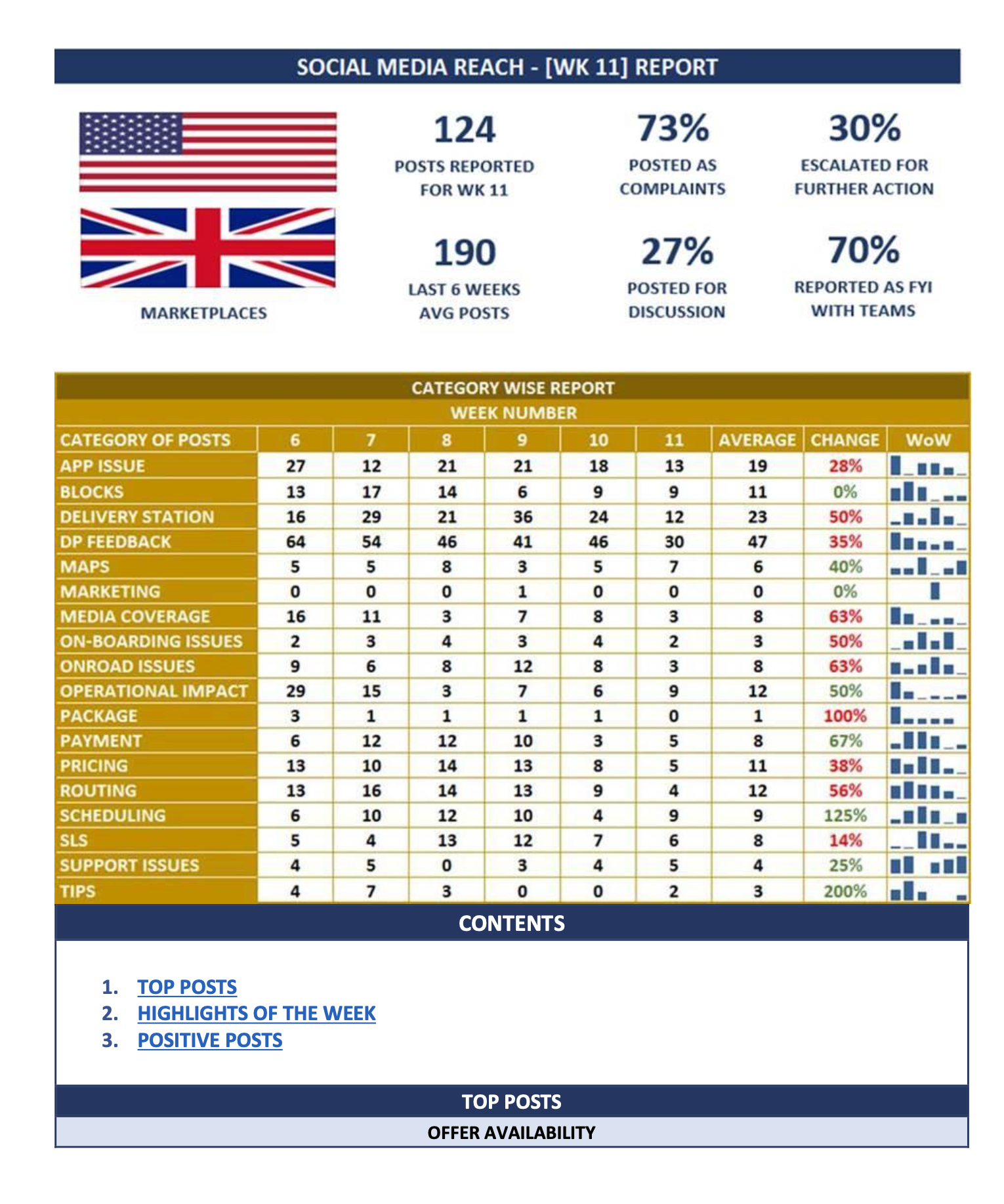 Other posts captured and deemed noteworthy were a tweet that shared a Splinter News article titled "'We Are Treated Like Animals,' Say Amazon Flex Drivers," and a Facebook post about a Fox 5 Atlanta article about an Amazon delivery truck driver being held at gunpoint.

"DP happily posted about his good experience of the program during his first ever route," another report stated. "DPs posted negatively about Amazon GPS/Maps," another said.

The domain currently pointing to the Amazon panel was registered by a person who's also listed as the point of contact for a business based in India. This person did not respond to an emailed request for comment. Archives of the website show that up to at least February of this year it displayed pages advertising an entertainment company. It is not clear why this particular domain is pointing towards the Amazon panel at the time of writing, be that in error or because it is in use by someone associated with the panel itself.

However, it is clear that this panel, and the reports, have direct connections to Amazon. The tool has an "owners" page that explains who works on the team, and their internal Amazon chat handles. It also has photos of the team that works on it, as well as their first names. Motherboard was able to cross-reference the photos and names of several of the people listed on the owners page with their LinkedIn pages and other publicly-available photographs. According to their LinkedIn pages, many of the employees who worked on this are current corporate employees at Amazon's headquarters in Seattle, while others work for Amazon in India.

Many of the documents also contain hyperlinks that go to internal Amazon URLs. The reports also list the names of teams and specific corporate employees who have had issues escalated to them—Motherboard also cross-referenced the names of these employees within the reports with their LinkedIn pages. Metadata included on some of the files also contains the name of an Amazon employee based in India.

On Tuesday, Motherboard reported that Amazon was hiring two intelligence analysts to track organizing efforts within the company. One of the listings said the company needed an analyst that can keep an eye on sensitive and confidential topics "including labor organizing threats against the company." While the two listings mentioned other threats, they focused mainly on "organized labor," which was mentioned several times. One of the listings had been online since January of this year, according to Amazon's own job portal.

After we published the story on the job listings, the company removed them from its portal, and a spokesperson said that "the job post was not an accurate description of the role— it was made in error and has since been corrected."

Amazon Is Spying on Its Workers in Closed Facebook Groups, Internal Reports Show