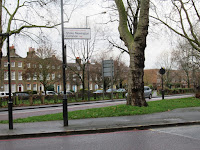 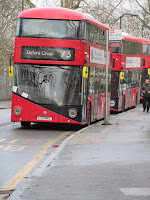 London was very muted this early morning of Friday 13 – in a sort of post-Election hangover of disbelief and trepidation about the future.  Boris was after all London’s Mayor for eight years, a period marked by grandiose projects of limited value and legacy.  Jo and I agreed not to mention the results, but at times our frustrations got the better of us – I shall spare you’re the anguish and post mortems and return to our route ‘de jour’
We had seen at least three Number 73s whirling out of Brooke Road so it was good to find them waiting to depart on Stoke Newington Common – this route has changed from our last trip, when it went from Victoria to Seven Sisters (a trip more easily accomplished on the Victoria Line)

We were very taken with the lovely terrace of early Victorian houses overlooking the common, with a few newer ones squeezed in at the end where there had clearly been some bomb damage.  The bus was really busy from the outset as in spite of railway lines crossing the common there is no very handy station nearby. Stoke Newington is however wearily trendy –who knew the Mint Gun Club was a reference to ‘Fear & Loathing in Las Vegas’? (it’s a bar) – and then there are artisan bread shops with slightly obscure names: finally on the High Street ‘Olive Loves Alfie’ a Creative family Lifestyle Shop???  Whatever happened to a name that ‘does what it says on the tin’? 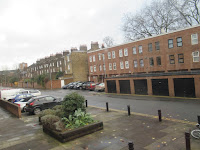 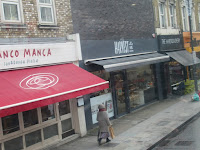 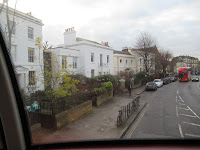 Betty Hayward School was, like many at this time of year, advertising its Christmas fair, and as it was not a name that rang any bells I looked her up: a true local stalwart who was a school governor for many years , from humble origins but working tirelessly for her community until she met a rather unnecessary death. 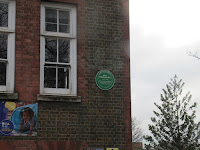 After following Albion Road for a while we arrived at Newington Green, where yet more folk boarded, and before long we were passing the Mildmay stretches of Hackney where Mary Wollstonecraft had clearly once been a resident, and founded a school for girls – this pioneer now has a statue on the Green for which this slightly incoherent
site campaigned.
After these minor thrills we continued down the Essex Road with its mixture of successful and less successful enterprises. 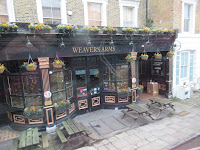 Most interesting was the very defunct Argentine Grill next to the thriving (but out of shot) Hummus Grill – single dish restaurants are always a bit of a gamble but I detect a (healthy ) trend here..
South Library is just about hanging on (open three days a week) but the colourful cinema has closed, even in its re-incarnation as a church as this website lovingly records. 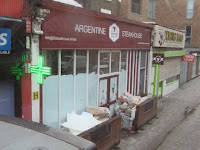 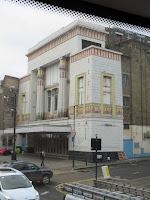 Now Floatworks DOES do what it says on the tin – namely offering flotation therapy, one of only two venues in London , and as by now we had joined the main streams of traffic at Islington Green we might say you could float away with the angels, except that this bit of London is always singular. 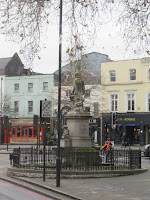 Our passage through Islington was surprisingly swift and by now with fewer passengers the 73 turns right along the Pentonville Road – having saluted Sir Hugh Myddleton, the founder of the New River we passed by its reservoir along here: prime real estate land, but as yet not for sale.. 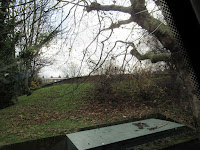 Doubletree Hilton seems to be a part of the Hilton Group which offers franchises, and this is certainly fairly recent to London. A longer term resident  of the Pentonville Road is the very dead and buried Joseph Grimaldi upon whose grave you are invited to dance. 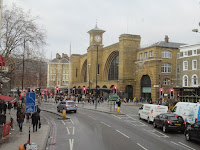 Soon we were at King’s Cross which, coming from this direction, involved a certain amount of one way-ing round the two big stations, past the British Library and along the notoriously slow Euston Road – actually moving slightly today. In fact we even managed to call into Euston station with its modest (Jo has other terms of endearment for it) bus station, and out again in a reasonable time-scale.  Other noteworthy landmarks of the Euston Road (apart from the station) include Friends’ House, built in 1926 and very much of that era.  It is the main meeting place for the Society of Friends, generally known as Quakers, though the website seems keener for the browsing public to book it as a venue than worship.  We were slightly bemused by the ornate 'fascia' over the lintels such a close up being the benefit of stationary traffic.    Nearby is the very shiny University College Hospital – Jo pointed out the decorative ‘pebble’ on the threshold though there are some who thought the money for public art could be better spent 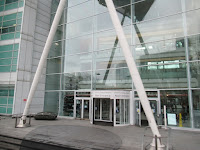 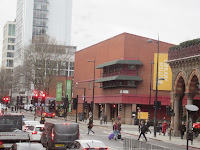 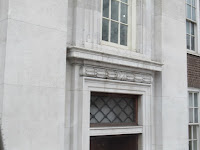 We were holding our breath as to whether the 73 would head south via Gower Street and more University College but no , the roadworks are complete and the 73 set forth bravely where only it and some bicycles are allowed, namely in the opposite direction to most traffic - this felt both daring and liberating and, for once, quick so the familiar sights of Tottenham Court Road sped past: the Underground stations, the furniture stores re-asserting themselves after the computer outlets took over including the wonderful concave windows of Heal’s who have been on site for 200 years. Tottenham Court Road is still suffering from Crossrailitis – a lingering disease which affects infrastructure and all the streets above ground as the developers move in and mess up the roads...  It is also its first anniversary of not opening.  Once past the road blocks we made it to our final stop, just short of Oxford Circus, 11 days before Christmas and where we barely noticed some very uninspiring lights before leaping, well stepping off.
Grumpiness at external events notwithstanding we did enjoy this route which takes you from the less well connected bits of Hackney to the heart of the West End and Oxford Circus. As for once it was not raining we threaded our way through Soho and down to Trafalgar square for a not too distant route.