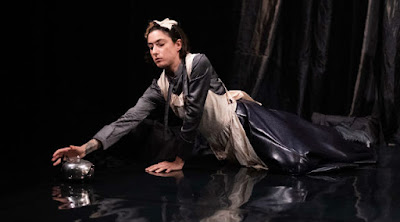 The Moors.
THE MOORS.

I saw this production of THE MOORS, a play written by young New Yorkian, Jen Silverman, several weeks ago. It is a production from Siren Theatre Company, Directed by Kate Gaul.

What was my response? I have found myself in turmoil. Not in any negative manner but in a turmoil of whirl buffeted by this contemporary take on THE MOORS. I have a history with the Moors - though I have never been there myself.

I came to this production understanding that the moors of the title were the Yorkshire Moors. The Yorkshire Moors in my imagination are wind swept valleys and steppes swathed in heather. Rain clouds of a tempestuous temper, weighted, oppressive and yet exhilarating. Clothes, cloaks (heard gear) all straining and fighting the passionate, violent airs of the scenery to try to manage sapien decorum. The wilderness and wilds of nature whirling about the oppressive religious constrictions of the household of the Bronte family of Thornton and Haworth on the Yorkshire Moors. Nature and nurture in high conflict producing in the 'rub' the inspirational imaginative literature that holds sway in any mind of worth and joy.

I was brought to the moors, at first, by the Hollywood films of the Bronte Sisters novels, particularly JANE EYRE (1847), by Charlotte Bronte and spectacularly, WUTHERING HEIGHTS (1847), by Emily Bronte (and, I am sure from other 'moorish' environments built, probably permanently in the Studios of the Warner Brothers for dozens of other films shot on the famous back-lots and colourings of the Warner's black and white cinema photography.)

My imagination, however, was burnished into 'colour' visions when, at school, WUTHERING HEIGHTS, was the novel prescribed for our final year exams for our Leaving Certificate. WUTHERING HEIGHTS became the bible of my intense preoccupation - my 'good' Catholic, religious teachers (my English teacher, Brother Christopher, was also, ironically, our Religion Teacher, at the time), probably, had no idea of the flames of rebellion and passion that were lit by the study of this novel and were to become the first steps on the pathway to my 'liberation' from the Christian Gentleman that I had all my little life been groomed for. Or, did he know?(MACBETH was our play text!) The characters contrasted, for instance, through the simpering and relatively bloodless virtuous, Isabella and Linton, alongside the tempestuously romantic (thrillingly gothic) Cathy and Heathcliff, situated in the landscape of the moors, became objects of awe burnt indelibly into my imagination and aspiration for a kind of happiness - no matter the pain (Oh, but that is very, very Catholic, isn't it? - check out my blog on LA PASSION DE SIMONE.)The final moments of entwining rose bushes from the graves of the heroine and hero, Cathy and Heathcliff, burnished into 'my history' with the utter satisfaction that the difficult, the 'other', will survive beyond time and place.

Then, shamefully, I must confess, only a few years ago, reading the novel of JANE EYRE, I was ignited to great surprise and admiration of that heroine, who had always been the lovely version allowed by the soft glowing talents of Joan Fontaine and the glowering Orson Welles and the Censorship Boards of the times (1943). Ignited to surprise and awe that Jane in the raw hand of Charlotte Bronte, spoken in the novel as a first hand autobiographical telling, was an uncompromising 'Monster' of will and determination (my excited view!), unsettling the world about her - who was all the more GREAT because she was a woman in an oppressive world where the only way to redeem a character of this kind in the Victorian Era, was to have her die, or,enter a convent, or,disappear in disguise to Europe, or, go into a madhouse, or, MARRY. (Jane chooses marriage, but it is to a burnt-out, blinded husk of manhood, taken, maybe under-her-wing as one might a wounded pet.) Following, closely, was my reading of Anne Bronte's THE TENANT OF WILDFELL HALL, and just its very title should give some shivers of iconoclastic expectation. When, becoming aware of the life of their brother, Branwell, the strength of these sisters who were all educated to be Governesses in the Households of their Betters, becomes magnified three times more intensely. The Bronte Sisters are icons of rebellion.

Surrounded on three sides by seating is a reflective surfaced revolve - Set Design, by Kate Gaul - with a long set of diaphanous drapes - very Kate Bush. The revolve is employed very niftily to keep the propulsion of the wordiness afloat and 'cool'. On it we meet the people of the play. The first dominant is an efficient young woman in a lemony-yellow dress (costumes, by Eva Di Paolo, of varying conviction), with her blonde hair wound tightly in a mid-Victorian fashion. Her name is Agatha (Romy Bartz) and she is a writer, and has been in a letter exchange in search of a Governess for her younger less organised sister, Hudley - a young fantasist in pursuit of her unique writer's voice.

Some thirty-five or more letters have been exchanged with Emilie (Brielle Flynn), the prospective Governess, who believes she has been intimate with the man of the House, Branwell. Unfortunately, Branwell is not fit company and has been installed, hidden in the attic. Emilie has been writing, flirting with Agatha. Emilie on discovering this shocking truth, has to confront, perhaps, her same-sex attraction. Both Agatha and Emilie, do. The sexual dynamics of the MOOR heats up in a very 2019 way. As well, the household staff is played by one person, Marjory upstairs, who in the flash of a costume addition, is Mallory downstairs (Diana Popovska), with two conflicting trajectories - one of them is pregnant, the other has typhus! Latterly, we discover she too has kept a diary-journal of the events of the house in a very Dr Jeckyll/Mr Hyde kind of way - and may end up being the best writer of this Moor isolated family. These hapless sapiens burdened with the curse of being animal with libidos to follow and fulfil - go forth and multiply - create a kind of havoc of their lives, because of their conscience, their brain.

But, in this house there also lives a Dog, Mastiff, (Thomas Campbell) who has, like Snoopy, in Peanuts, the gift of the sophist. He has an eagerness to teach the meaning of it all, of life, of the great existential questions, and comes across a Moor-Hen (Alex Francis) who he believes maybe an messenger to god , who takes to listening. They develop a kind of relationship driven by cerebral disquisition. Moor-hen barely keeping up. Mastiff, has the elegance to talk while choosing a perfect green grape from a beautiful bowl that seduces the moor-hen into a place of trust and repose. But they are of an animal species, too, and it all ends with the Darwinian urge to kill and eat. The brightest is also the most ruthless killer. The survival of the fittest.

The world of THE MOORS of the Brontes without ever directly referencing them is tossed upside down and the writing gift of Ms Silverman supersedes one's objection of being tricked by the subverting of my/our Gothic Romantic inheritance to create a new genre. (New Genre?). It is the bare brazen consistent cheek of it that wins one over. Like the STUPID FUCKING BIRD adventure from Aaron Posner, last year, THE MOORS yields an amazing time in the theatre. The play is the dazzling thing.

There are problems with this production. The acting is good but extremely uneven in quality. At the top of the heap is Thomas Campbell in a virtuosic turn as the dog speaking of god. Thomas Campbell the Charles Laughton of this generation, the new Simon Russell Beale of the English speaking world? i do think so. Romy Bartz, similarly, has mastery of her tasks if not the same intellectual bravado, and their performances are two further seasons after the writing, to make a point to see this production. While Enya Daly, in a key role as Emilie, reproduces her comic skills that we have seen in other work from REVOLT. SHE SAID. REVOLT AGAIN, to her NIDA show of a production of TWELFTH NIGHT. All her offers tend to rely on same presence of her comic stand-up routines rather than that of an interrogative actor (I have the same concern with the work of Annie Stafford.) This 'habit' is nakedly realised in the choices that the Director and the Actor has made in the manner of delivering the 'hip' songs, singing routines. It is becoming a kind of disruptive distraction to what is going on, and is not stitched into the play productions she is involved with, seamlessly. I single it out for I have great hopefulness of their potential but fear they have been allowed to indulge a gift that reaps easy reward.

If you love the Brontes, you will get the cleverness, if not, I am not sure what you will take away.

THE MOORS, is interesting. And if you are from a crippled literary heritage - get cracking - I promise you will, if you have wisdom, gain entries to being alive that are necessary to appreciate the world around you when yo read the women of THE MOORS.