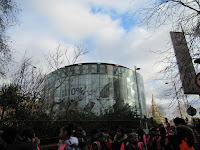 Our 76 had left us round one side of Waterloo so we cut through the station, using the free facilities on the way, and located the T Bus stop (which I would have called slip road to South Bank rather than Waterloo Station.  There was a very muddy dusty bus waiting and when a much cleaner looking one drew up behind the first one and opened his doors, we got on as the only passengers. 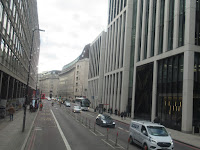 It takes a series of roundabouts to get clear Waterloo, passing the Imax with the creepers gaining ever more of a hold on the circular cinema.  More venerable buildings look over the circulating traffic: the once Royal Waterloo Hospital for Children & Women, and St John’s Church .  More building on central plots is evident when you pass the Park Plaza hotel after scooting along York Road, where the Belvedere Gardens development may offer stunning views to the front (balconies overlooking the Thames and the Eye) but from the back have a rather oppressive impact on the road. 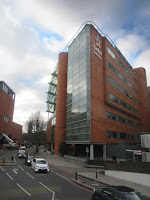 Some of this development was previously the UK headquarters of Shell, while the hotel next door was once County Hall – as the bus stop is still known.  Opposite is another former hospital whose history is well documented here and which is now also a hotel.
It’s good to know therefore that St Thomas’s and its Children’s Department at the Evelina are still functioning as hospitals and have not been turned into hospitality centres.  St Thomas’s has a long history in London and the Florence Nightingale Museum is worth visiting. 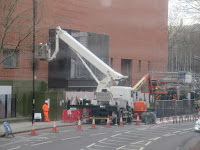 Across the road some works on a church building slowed the traffic somewhat so we coasted slowly round Lambeth Palace and the adjacent Garden Museum, Garden Museum which I believe has had a makeover since we visited.  We believe the pineapples atop the supports for Vauxhall Bridge are there to remember MR Tradescant who imported many new species. 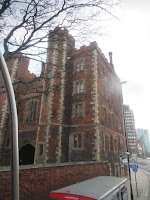 The Albert Embankment runs along a fairly straight stretch of the River looking very grey today... There are plansafoot for the listed building which was the former HQ of the London Fire Brigade but it all looked deserted today? 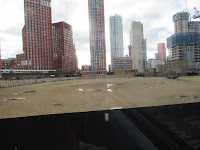 Jo was pleased to locate the small theatre ‘Above the Stag’ for which she had been filing programmes but before we could take any photos the bus had started its tour of Vauxhall – in order to enter and exit the bus station in the correct direction the 77 does a complete circuit of the unlovely (and difficult to navigate) Vauxhall one-way system.  Even there we gained few additional passengers.
The ‘new’ Covent Garden, which has been here for about 43 years is part of a huge regeneration project.  The rehousing of Flower Market, down the road from the vegetables, the relocation of the American Embassy (hence housing called Embassy Gardens) and finally the transformation of Battersea Power Station have all made Nine Elms an extensive building site but today’s excitement was to spot Nine Elms (tube) station, now nearly complete. 'What line is that one?' said Jo –' the extended Northern', I answered, which looks to be a deal more ready to go than the Elizabeth Line, although of course only it consists of two stops – this and Battersea Power Station, though there could be plans to link into Clapham Junction. 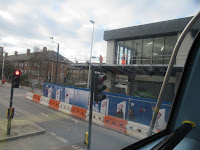 By now we were on the long straight stretch of the Wandsworth Road, along which there are two impressively large areas of social housing: Lansdowne Green and the even larger Springfield Estate, both wonderful 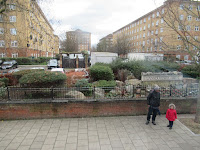 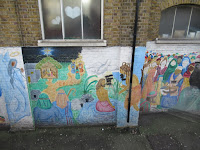 examples of the grand scale and aspirational ideals of the then London County Council building homes for families. There are a few shops at this point but the numbers increase as we approach Clapham Junction; the Battersea Arts centre continues in the pretty former Town Hall and was showing ‘Goldilocks and the Three Musketeers’ a novel mash-up?  Clustered around are  more community facilities from chapels to police, and a generous sprinkling of pubs up to including the Falcon. 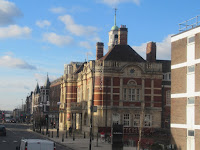 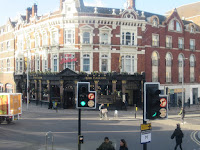 If you wanted to catch a train you needed to get off before the 77 turns left down St John’s Road briefly – we wondered how long this branch of Debenhams on the corner was going to survive.  Wandsworth workers were up on their mini cherry pickers removing the Christmas decorations so we squeezed past and right up Battersea Rise, always a slow ride as a narrow stretch of road that is both the A3 and the South Circular – ouch.
Still the 77 turns off in a SW direction, essentially the only route parallel to the railway, which is at first visible but then less so, for a long stretch past the more open area of Wandsworth Common . A stop named for Windmill Road led me to find out whether a mill remains – it was built as a pump for the railway which runs in quite a deep cutting and presumably was prone to flooding, which must still be a risk for this busy line.
(At this point we were driving directly into the sun thus rendering photography difficult) At the end of the common the bus turns down Earlsfield Road which is bordered by sizeable Edwardian homes with never a handy shop for the residents.  A couple of ‘ghost sings’ provided evidence of previous small newsagents but the locals will now have to head to Earlsfield or further away for their milk etc.  The 77 joins long Garratt Lane about halfway down and in time for other passengers to catch a train at Earlsfield Station, which forms the hub of local shops and pubs of all kinds.  We noted that the Sailor Prince pub had been reborn as the Wandle, after the river which runs nearby.  There is a theatre too, the home of Tara Arts which for more than forty years has been promoting the  varied culture of South Asia and now has a permanent home here.  The nearby and strangely named Hallowed Belly proves to be a pub with food, and then the shopping and eating opportunities peter out somewhat as Garratt Lane continues to wind its way down to Tooting passing through Summerstown struggling to maintain a separate identity between Earlsfield and Tooting. 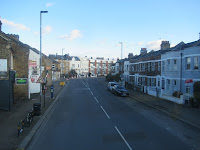 I always think the cemetery and the nearby almshouses are near the end of Garratt Lane but in fact there a couple of stops to go and for once I was able to observe the street numbers which go up to 1085 – pretty high for an English road. 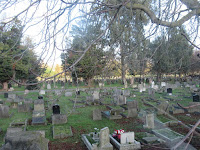 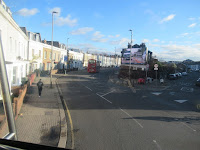 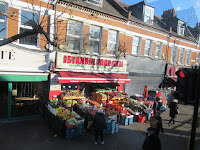 We had been somewhere between amused and irritated by a back seat passenger who was planning his weekend with a friend on the phone (though the friend did not get much of a look in) starting with going to bed later today, waking up at 10PM, going out then getting in at 3-4 AM, and starting again Saturday after a modest lie-in...  The 77 will be tucked up in its garage so he will have to take a N44 or the tube to keep those hours, but definitely not our problem.  Like most of the other passengers, he got off at the Broadway (where there is also a college) while we carried on down Tooting past Amen Corner to the altogether shabbier and less used Tooting Station.  We had been hopeful about a promised regular Thameslink service but hit a 19 minute wait on one of London’s more derelict seeming stations – not withstanding the mural.  Our journey had taken 10 minutes over the hour to solid SW London after all the novelties of Thameside buildings. 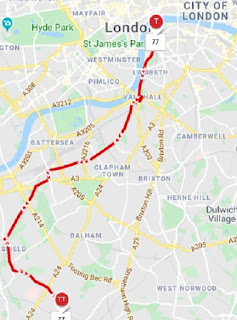