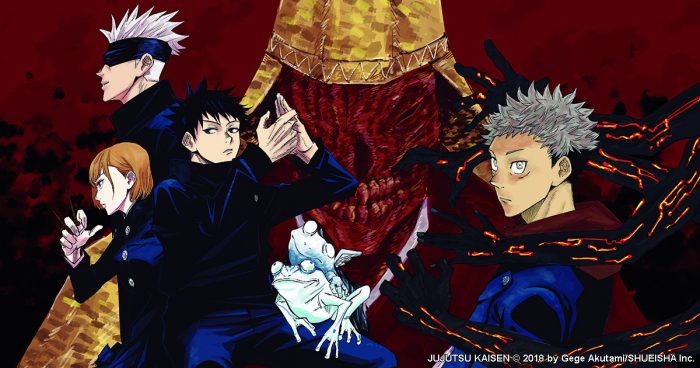 Jujutsu Kaisen, the horror-flavored battle shounen that just ended its first season a few weeks ago, has some mighty fine waifus and husbandos in its cast. We’ve got stylish sorcerers who exorcise curses with unique techniques, as well as some humanoid curses who give the heroes a run for their money. And since MAPPA’s animation is so gorgeous, we get to see them in the best quality an anime fan could ask for. Here are the five characters from Jujutsu Kaisen we’re simping hard for! 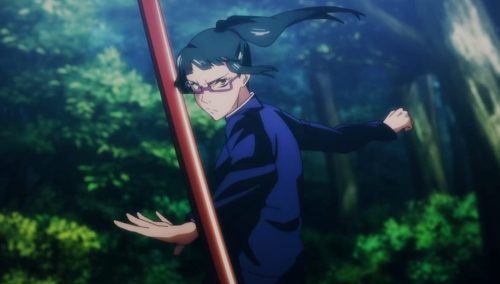 The Zenin sorcerer family cultivates its secret techniques through bloodlines, so if a child is born without them, they’re relegated to second-class status and are considered an embarrassment to the Zenin name. Maki was dealt an extra difficult hand in life because she was born not only without the secret techniques, but without any jujutsu powers at all. However, she became a sorcerer anyway (using charmed glasses to see curses and magic weapons to exorcise them) just to spite her disapproving elders, and we absolutely love her for it. She’s physically strong enough to overpower many of her other classmates, keeps a cool head in any situation, and refuses to let her past drag her down. Maybe she’s a bit too intense for her own good, but we can’t help but be fascinated by her every move!

Yuuji certainly isn’t the first anime protagonist with an evil spirit trapped inside of him, but he’s definitely got one of the scariest (and sexiest) spirits we’ve ever seen. Ryoumen Sukuna is a legendarily powerful curse from ancient times who seeks only to bring chaos upon the world, but he’s surprisingly intelligent and crafty as well. He looks like an adult version of Yuuji with extra eyes (and sometimes arms), tattoos, well-defined muscles, and a sinister grin. He sits atop his throne of skulls within Yuuji’s mind, and if anyone dares to invade this space, he’ll leave them so terrified that they'll wish he would’ve just killed them. We love how unapologetically evil he is, and we hope to see more of him if there’s ever a season 2!

Don’t let Nobara’s “fashion-obsessed teenager” act fool you—she and her jujutsu techniques are nothing to scoff at. She’s a take-charge country girl who mercilessly cuts down curses with her voodoo-esque sorcery and doesn’t have time for any of this navel-gazing nonsense that Yuuji is always caught up with. She’s also certifiably insane, as seen when she toys with Eso by linking her sense of pain to his and pounding nails into her arm until he gives up. If you’re a fan of characters who could beat the crap out of you without even trying, Nobara is perfect simp material... just don’t get on her bad side. 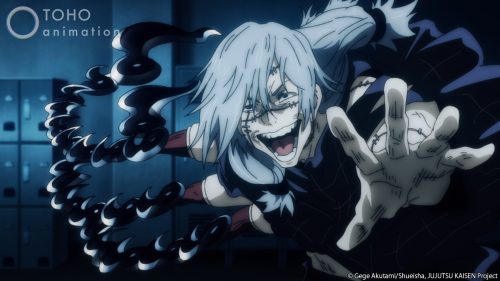 Mahito seems pretty harmless at first, after all, he’s a jolly patchwork monster in a poncho who holds meetings for his gang at family restaurants and beaches. However, once you discover that he’s a living manifestation of human cruelty who polymorphs people into hideous monsters just for funsies, he gets a lot more frightening. Still, Mahito’s spritely demeanor is always a joy to watch and he tends to fight without a shirt on, so we’re not exactly complaining. He even shows up wearing a sailor uniform in one omake segment, which is equal parts cute and creepy. Honestly, some of the villains in this anime are works of pure art! 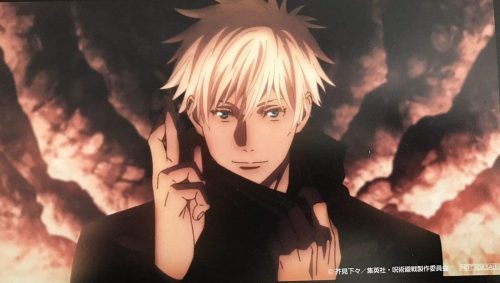 Those eyes. Those eyes! If someone told us that MAPPA spent a huge chunk of their animation budget on Gojou’s sparkling blue eyes, we wouldn’t be surprised in the least. This nigh-unstoppable sorcerer acts like a goofball teacher most of the time, but when he gets serious and his ubiquitous black blindfold comes off, he can unleash an attack that bends space-time and spells doom for any curses who dare cross him. We love his more lighthearted moments as well—the comedic father/son relationship he and Yuuji have going on is particularly adorable—but we always sit up and pay attention when it’s time for a curb-stomp curse beatdown. Those monsters should count themselves lucky that Gojou’s eyes were the last thing they ever saw!

We also can’t get enough of Aoi Todo, the boisterous muscleman; Toge Inumaki, the sultry-voiced second-year; Mei Mei, the miserly instructor; and Megumi Fushiguro the animal-loving punk. But who are your favorite simp-worthy characters from Jujutsu Kaisen? Let us know in the comments, and thanks so much for reading!