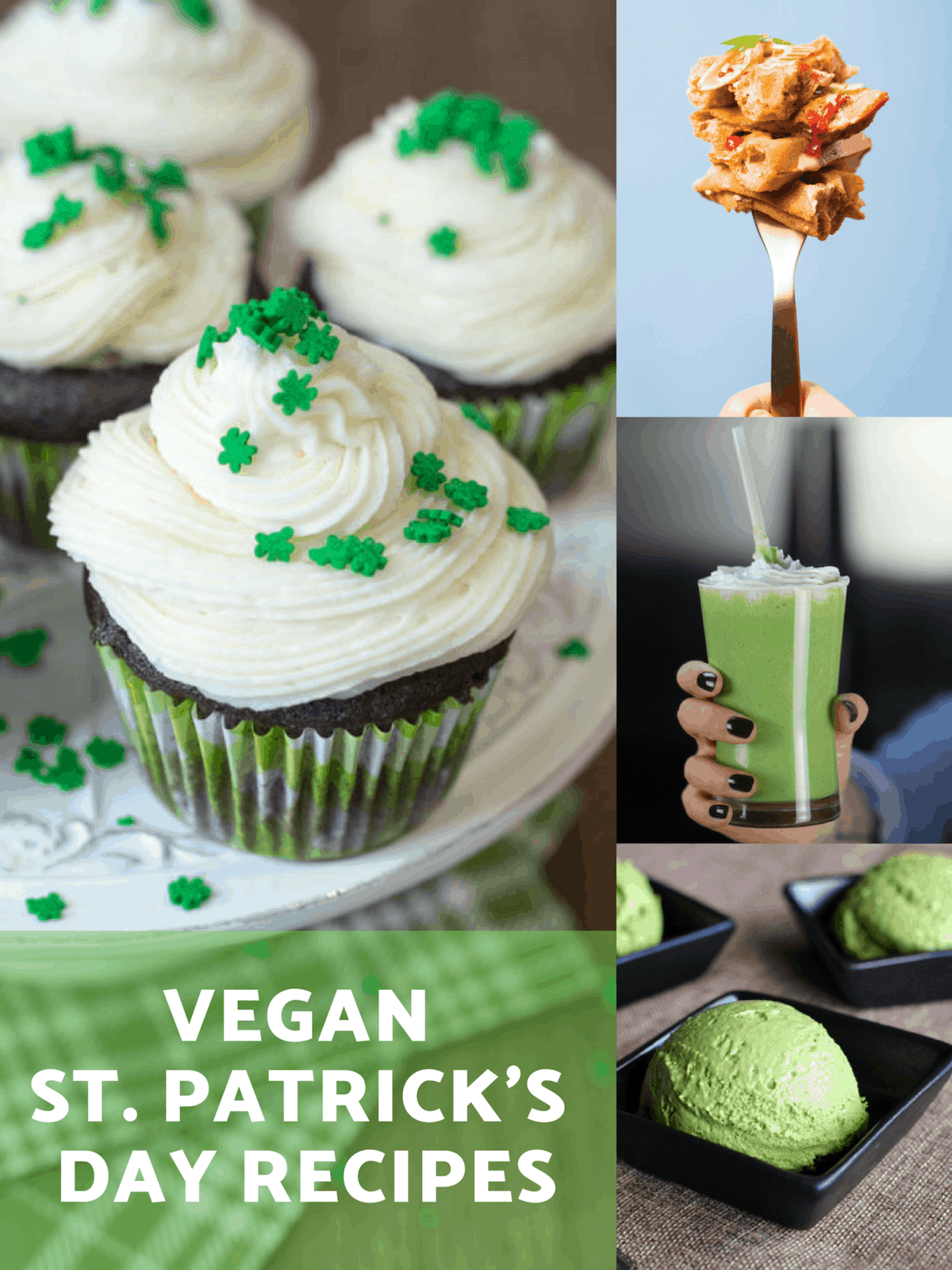 Who wants Vegan St Patrick’s Day Recipes?! Just for you, I compiled my fave 5 vegan recipes for St. Patrick’s Day! From Beer Waffles to Green recipes, The Edgy Veg has you covered for St Patty’s Day! Okay, I know i said St Patrick’s Day doesn’t have to be all about green food or alcohol, but Guinness is part of Irish tradition and has been vegan since 2017 (according to online sources, but always double check since food products always change their ingredient lists)!

If you’re going to a St Patrick’s Day party or having friends over, Guinness Cupcakes with Bailey’s Buttercream frosting is the best recipe to make! There is simply no better way to drink your booze and eat your dessert at the same time.

Here’s a good throwback from 2014 when I made this Vegan Shamrock Shake! The shamrock shake is a green, minty milkshake that typically McDonalds serves in March, but this recipe is VEGAN and you can easily make it at home!

If you want to make your own green ice cream at home, check out the next recipe below!

For a healthier “green” dessert for St. Patrick’s Day, try this Matcha Green Tea Ice Cream! Matcha has lots of health benefits and you can add it to almost anything to make it green for St Patty’s Day!

To make your DIY Match Ice Cream, all you need is matcha, coconut milk and cashews! Super easy!

Once I was able to break down exactly what made Baileys so special, it was a no-brainer. I knew exactly what plant based ingredients I could use, to make it taste almost identical, or if I may be so bold—maybe even better than the original. Last but not least, Vegan beer waffles for St. Patrick’s Day! I know Pancake keggers are common on St. Patrick’s Day (at least when I was at college), but I wanted to create an Adult Beer Waffles that are discreet and not necessarily dyed green (although you could add green if you wanted too)!

Go to page 77 of my Edgy Veg Cookbook for this Chive & Sriracha Beer Waffles Recipe! If you don’t have my cookbook, you can buy it in-stores or on Amazon here!

These beer waffles are perfect for St Patrick’s Day brunch with your partner or group of friends!

You guys must try these Vegan St. Patrick’s Day Recipes & let me know what you think! Once you try it, come back and leave me a comment below with your feedback and star rating! If you make this, let me see on social! Tag @edgyveg on your photo & add the hashtag #theedgyveg in your caption so I don’t miss it!