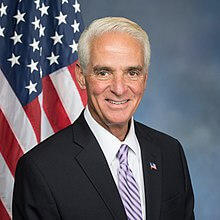 Democratic Congressman Charlie Crist, a former governor and Attorney General in Florida, has requested the Department of Justice to look into Gov. Ron DeSantis’  decisions that have raised questions about special treatment and political connections in securing vaccine doses.

“I request that the Department of Justice determine if the Governor’s blatantly political vaccine distributions, which did not seem to be in the public’s best interest, violate federal law and merit a full federal investigation,” Crist wrote in a letter Sunday. He posted it on his Twitter page.

News outlets, including the Florida Phoenix, have written about influential lawmakers, business leaders and others pushing to provide first-in-line vaccine doses to communities and groups.

In a recent case that garnered national news coverage, Gov. Ron DeSantis appeared in Manatee County to open a vaccine “point of distribution,” or pod, at the affluent Lakewood Ranch, which was developed by prominent businessman Rex Jensen. Showing up at the news conference was former Senate President Bill Galvano.

Members of the county commission were upset that doses were targeted to affluent neighborhoods rather than underserved neighborhoods.

But that wasn’t the first time that doses seemed to go to areas represented by influential state officials or in heavily Republican areas. The usual vaccine distribution now is focused on people 65 and older.

And with some 4.5 million seniors age 65 and older in Florida, getting a vaccination can be a struggle because the supply doesn’t meet the demand.

Earlier in February, DeSantis started targeting vaccines to specific groups, such as home-bound survivors of the Holocaust, the Bay of Pigs, World War II, and the Korean War. Regarding the Bay of Pigs veterans, DeSantis said he’d been approached by Republican state Sen. Manny Diaz, Jr. and other influential Miamians to provide the vaccinations.

DeSantis said at the time that because of these groups’ sacrifices, “morally, it’s the right thing to do.”

He also has reached out specifically to houses of worship, including African American congregations, synagogues, and mosques, to reach under-served populations. And, in early February, the governor set up a pod in the struggling Lake Okeechobee community of Pahokee.

But even some of those happened because of people with connections. In Pahokee, it was John Davis, his Department of the Lottery chief, who’d been approached by philanthropist Anquan Boldin, who’d played football with Davis at Florida State University before they both joined the NFL.

And the Koinonia Worship Center in Hollywood, one of the churches involved, is led by pastor Eric Jones, father to Democratic state Sen. Shevrin Jones.

DeSantis said in Pahokee that the vaccine came from “a very small number of doses at the Division of Emergency Management that we use to fill gaps if something happens or you need more.”

Crist, who is now a Democrat but served as a Republican as governor and Attorney General, said in the letter that, “Given the enormous latitude Governors have over vaccine distribution, it would be unconscionable for political corruption to trump both fairness and the best medical guidance.”

He added: “While I am anxious for every Floridian in every community, to get the vaccine as soon as possible, it should be done based on fairness, not political connection.”

Following the Manatee incident, DeSantis has been on a damage control, appearing on Fox News more than once, seemingly to deflect criticism over alleged special treatment in securing vaccines, according to the Phoenix.