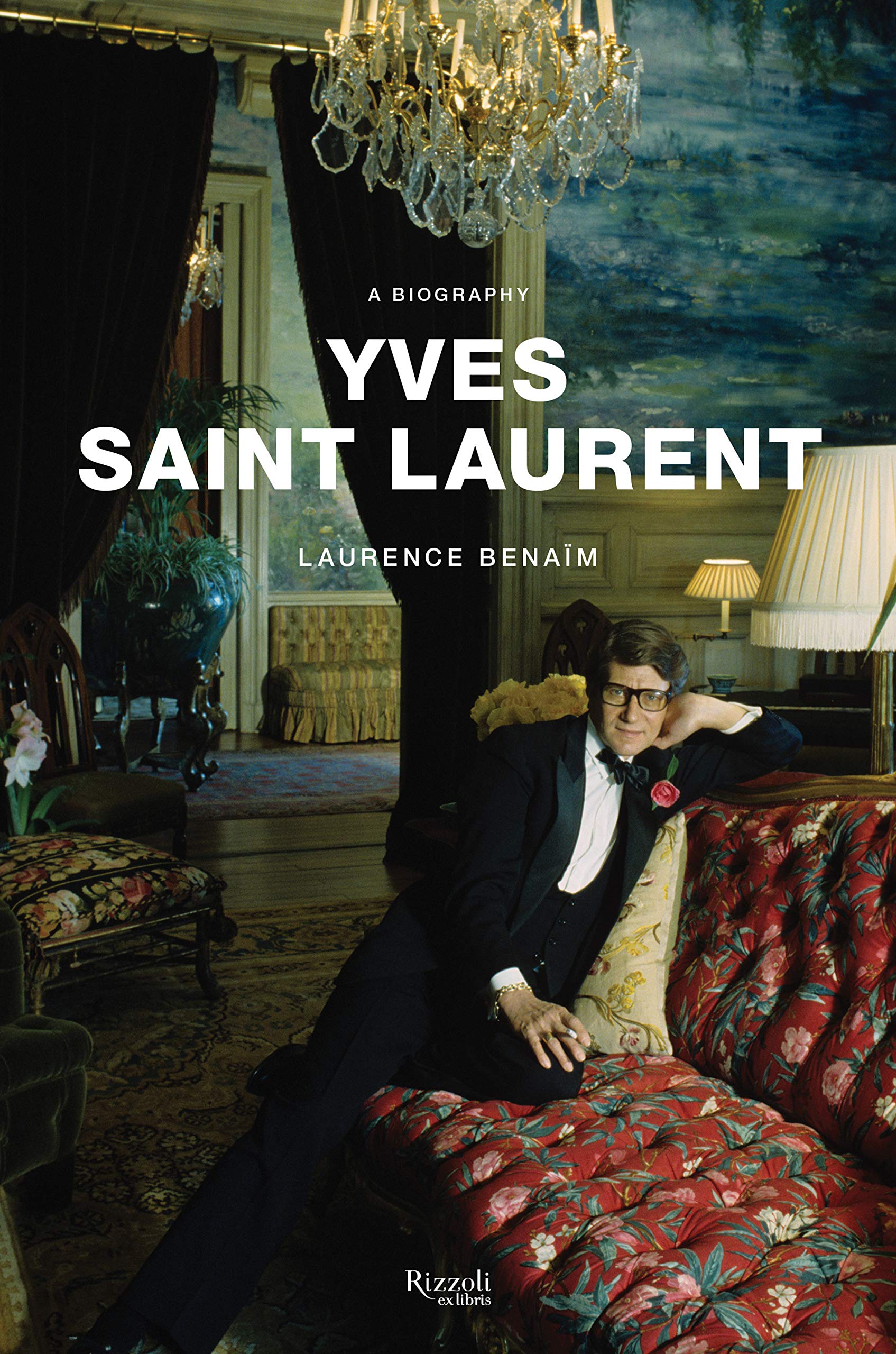 Originally published in French in 2002, Laurence Benaïm’s biography was the basis for Yves Saint Laurent, the first of 2014’s two biopics about the iconic designer. Kate Deimling’s new translation preserves the florid, novelistic quality of the French original (it may remind readers of Edmonde Charles-Roux‘s similarly overripe-yet-authoritative biography of Coco Chanel). But while this English version is welcome, it’s a bit more than fashionably late.

At a dense 544 pages, it’s tempting to call the book the definitive biography of Saint Laurent, but it has some major gaps, both chronological and substantive. It ends with Saint Laurent’s retirement in 2002, and while it has been “updated” for reissue in English, the updates are not to the text itself. The author has written a new preface and extended the timeline in the appendix by 11 pages, bringing it up to the present day (That’s where you’ll find bullet point references to Tom Ford, Hedi Slimane, the work of the Foundation Pierre Bergé-Yves Saint Laurent, and various auctions, retrospectives, perfume launches, and corporate takeovers, plus the deaths of Saint Laurent, his partner—in life and business—Pierre Bergé). Bizarrely, she’s even added a playlist. Yet, she has neither expanded nor reevaluated Saint Laurent’s nor has she seen fit to include a single image.

Moreover, Benaïm, a respected fashion journalist and scholar, seems to have fallen into the journalistic trap of trading objectivity for access. In addition to Saint Laurent and Bergé, she interviewed Saint Laurent’s premières, clients, chauffeurs, and muses. The book is overly worshipful—Benaïm praises Saint Laurent as nothing less than “the sum of all the couturiers of the twentieth century: Poiret, Vionnet, Chanel, Balenciaga, Dior, Schiaparelli, and also Givenchy” —and detailed to a fault. Surely, we could have been spared teenage Yves’ pretentious poetry?

Saint Laurent was still a teenager when he went to work for Christian Dior. The couture cobbler Roger Vivier described him as “a thin young man with glasses on his nose who looked very serious. . . . There was something very strict, very diligent about him, which clashed with the traditional image of a fashion designer.” But Dior knew talent when he saw it. As the painter Bernard Buffet, told L’Express: “People said that Christian Dior was a magician. But his final accomplishment was , at the most essential moment, to make the right young man appear—not to replace him, but to continue his legacy.” At the age of just 21, the shy, bespectacled beanpole inherited Dior’s mantle following his sudden death in 1957. Within a few years, he was head of his own namesake couture house. (He poached half of his staff from Dior’s atelier).

Benaïm deftly teases out lifelong themes like Saint Laurent’s love of theatre (“he had grown up with the idea that fashion was costume”); his ties to Algeria, where he was born; and his physical and emotional fragility. She is less insightful when it comes to another constant in his life: his relationship with Bergé, whom he met for the first time at Dior’s funeral. Bergé remains a cipher, probably because he cooperated with the author. Saint Laurent, too, comes off as positively monk-like in his single-minded pursuit of elegance; Benaïm glosses over the less savory aspects of his character, such as his self-destructive streak and his petulance (he blamed “bad models” for his failed Winter 1963-64 collection). A master sketcher, he would disappear for weeks of intense drawing before beginning each collection. He then left it to his poor seamstresses to work out how to bring his visions to life, which they frequently managed only with great difficulty. It’s a shame, because Saint Laurent is less interesting without his flaws, as anyone who has read The Beautiful Fall, a chronicle Saint Laurent’s rivalry with Karl Lagerfeld, or the dishy oral history Loulou & Yves will appreciate.

Saint Laurent presided over the death of haute couture, which was done in not by any single designer but by changing economics and gender roles, and the rise of the Nouvelle Vague youth culture. It was not a seamless transition: the Chambre Syndicale banished Pierre Cardin for five years when he dared to show a -à-porter collection. But while other couturiers bemoaned the rise of ready-to-wear, Saint Laurent embraced it. Without going as far as André Courrèges, who pushed fashion forward into the Space Age, Saint Laurent embraced street style as a way of experiencing the youth he himself had been denied. But he also had to face reality: the women who could afford couture were seldom young or slim. While Dior built shapewear into his dresses so they could flatter any figure, Saint Laurent’s “made the chest disappear and were off limits to anyone measuring over thirty-five inches,” Benaïm writes.

The media frequently pitted Saint Laurent against Coco Chanel, fresh off her postwar comeback, contrasting her restraint with his theatricality. But Benaïm points out that they actually had a lot in common. “He shared Chanel’s aversion of styles that were small, precious, flowery, or cutesy—woman as .” Saint Laurent’s early solo collections included trousers, “suits without padding, slim coats, light, porous wool pieces,” and lots of . The jeweler Robert Goossens nailed the difference: Saint Laurent had Bergé to shield him from the harsh realities of life and business, while Chanel combined Yves’ creativity with Bergé’s formidable and sometimes frightening energy.

While “YSL’s” androgynous chic was perfect for the 1970s, he was out of touch and out of fashion by the late 80s. The Wall Street Journal dubbed the house’s 30th-anniversary show at the Opéra Bastille in 1992 a “veterans’ retreat in a devasted city.” Saint Laurent couldn’t understand the appeal of couture’s latest enfant terrible, Jean-Paul Gaultier, whose clothes looked like they had come from “a brothel in Germany,” he complained. Yet “the whole world was shocked,” Benaïm writes, when Saint Laurent announced his retirement in January 2002; he was, after all, only 65. His couture business retired with him. In October of the same year, Tom Ford presented his first collection for Yves Saint Laurent Rive Gauche. The “Rive Gauche” would be dropped in 2004, as there was no longer any need to distinguish ready-to-wear from couture. Hedi Slimane brought back the couture operation in 2015, though he axed the “Yves”; today, the house is known simply as “Saint Laurent.” Maybe that was the impetus for this tardy translation: to remind the world of the man behind the monogram.

Dr. Kimberly Chrisman-Campbell is an art historian specializing in fashion and textiles. She has worked as a curator, consultant, and educator for museums and universities around the world. She is a frequent contributor to books, scholarly journals, and magazines, as well as an experienced lecturer. Her areas of expertise include European fashion and textiles and French and British painting and decorative arts of the seventeenth, eighteenth, and nineteenth centuries. She is the author of Fashion Victims (2015) and the forthcoming Worn on This Day (November 2019).