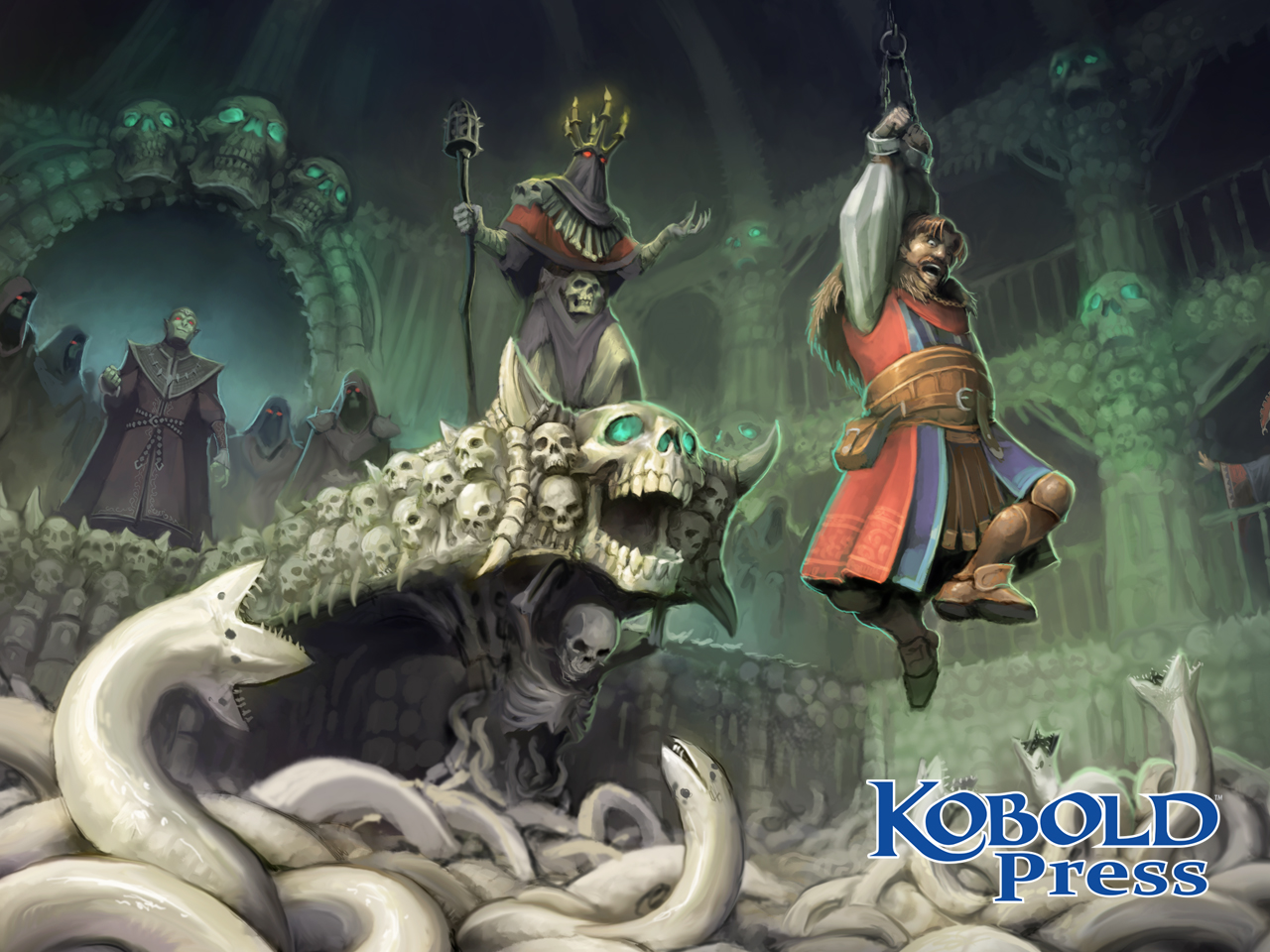 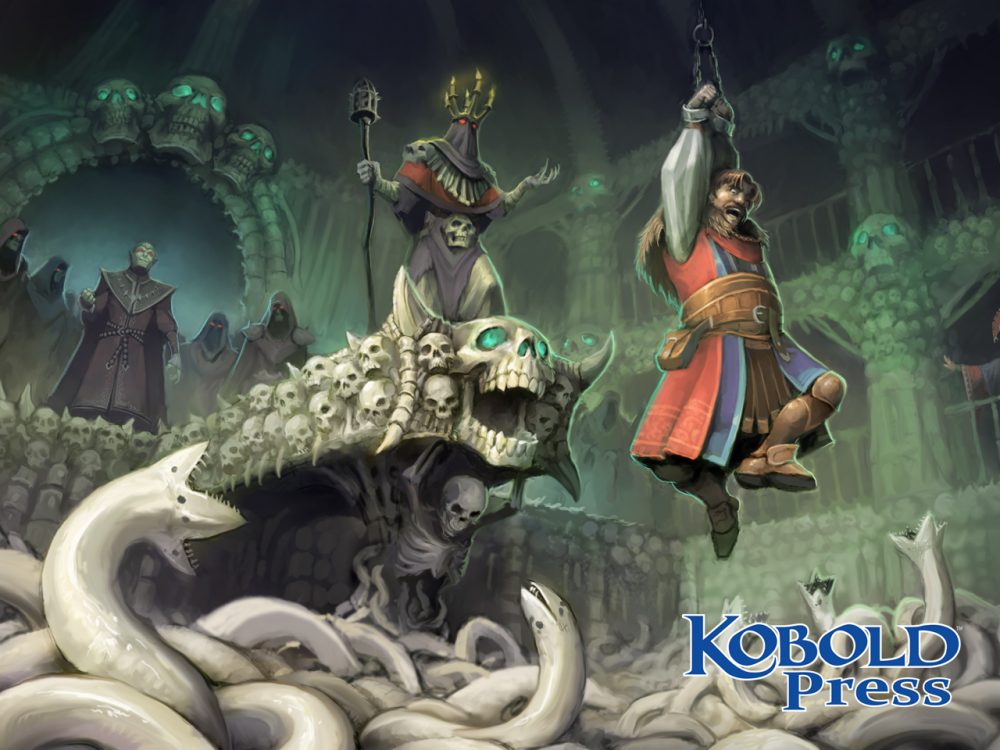 Empire of the Ghouls is certainly a monumental achievement from the kobolds as the first hardcover-length adventure that spans 1st to 13th level and takes the players on a tour of Midgardian highlights before it delves deep into hitherto unseen realms as rich as they are dark. But the unwholesome feast on offer doesn’t end with that one book, magnificently macabre though it is, but continues in the twin goodness that is the Underworld Player’s Guide and Underworld Lairs. And what’s truly interesting to me here is that these two books when taken together don’t so much expand the narrative content in Empire as they give GMs an entirely new way to interact with the Underworld, far beyond the confines of the hardcover storyline.

For one thing, Empire of the Ghouls really works best when the PCs are surface-worlders, characters from the sunlit realms, from Zobeck or thereabouts, who get drawn into the Ghoul Imperium as outsiders. This is the ideal way to experience the world for the first time, the adventure slowly pulling the curtain back on the subterranean horrors and the complex and nuanced politics of this bloody, grisly world. The feel of being outsiders to a realm few above ground have ever seen adds to the specialness of the adventure as the threat of becoming a slave to the empire or dinner for one of its citizens (or maybe one and then the other) adds to the ever present sense of unease and danger that permeates the caverns. But the Underworld Player’s Guide is full of new races that might populate this netherworld, not as interlopers but as citizens. As Richard Green suggested in my interview with him previously, these races might work best as replacement characters, stepping in when PCs die once the campaign is underway. (Or if I may suggest, as great characters for a “world above” campaign completely separate from Empire, where the PCs are the interlopers to the sunlit realms and not the inverse. But let’s look at these new races.)

First off, we have the darakhul, the ghouls themselves. The Player’s Guide expands them from what has appeared elsewhere, adding in the idea of “heritage” (that is, what you were before you became undead), so in addition to human ghouls, you can be a dero, dragonborn, drow, dwarf, elf/shadowfey, gnome, halfling, elfmarked, kobold, ravenfolk, tiefling, or trollkin heritage ghoul. Now, while you can find a few darakhul in Zobeck, and playing a ghoul-in-hiding in a surface-world campaign would be a lot of fun, I’d hold off starting Empire with darakhul characters myself, just to keep the Underworld “other” and mysterious. But certainly, there is room for adding a sympathetic darakhul player in once the campaign is underway.

Then there’s dark trollkin, a subsurface cousin race to the aboveground variety—the Underworld Player’s Guide acknowledges they wouldn’t be entirely out of place above ground. So your PC might be from a family of dark trollkin who sought a better life in the world above, and you might have very mixed feelings about going underground again and facing whatever you were fleeing. Then there are derro with three subraces—a tricky race to play because of their madness but a potentially rewarding one for the same reason. Next are the dhampir who, of course, are already a staple of Midgard adventures (I’ve got one in two of my three current campaigns). Empire presents a lot of tensions that exist within the alliance between Morgau and the Imperium, so you might be a dhampir with an agenda in the adventure, either pro- or anti-empire.

A really exciting race, one long overdue for the Migard treatment, is the drow, presented here with three subraces. Drow in Midgard once had a subterranean kingdom of their own, but they were overrun by the darakhul who found them especially, well, tasty. A drow PC in Empire of the Ghouls would be especially paranoid, a choice jammed-packed with roleplaying opportunities and fraught with very personal dangers.

The mushroom folk are really interesting additions. They can’t be eaten by the darakhul, but the mushroom folk can eat them (fungi thrive on decay after all). A mushroom wandering into the world above would be a really amusing character, just for being so alien, while one who ventured into the Ghoul Imperium would be one of the race characters with nothing to fear from the denizens there. Well, nothing besides the usual dangers of death and dismemberment, but no fears of becoming a midnight snack!

The satarre are, as far as I can tell, something wholly new. The “children of Nidhogg” are servants of the dragon gnawing at the roots of Yggdrasil, weird reptilian/insectoid looking creatures who speak Void Speech and hate ravenfolk. They are carriers of rot who seek the end of all things. A PC satarre would be most unusual indeed, even if they were, as the Guide suggests, exiled for being less enthusiastic than expected about the world’s end.

And finally, there’s the shade, the physical personification of a dead humanoid that just wasn’t ready to go yet. They look and act and eat just like a real living being, but they need memories to anchor them to the world, and they begin to fade and grow insubstantial if they are injured or tired. They can drain the life out of others but are susceptible to spells and effects targeting undead, and beginning at 3rd level, they can dissolve their flesh into an ephemeral cloud for up to a minute. The Guide suggests there are a lot of shades in Krakovar after the vampires annexed that country, and that is exactly where I’d put them. A shade clinging to life until their country is liberated would be an awesome character to explore. What’s more, bringing a dead PC back as a shade would be a great way to let a character continue when resurrection isn’t a viable or desirable option.

Of course, the Guide isn’t just about player races. There are a host of new subclasses, all Underworld themed, from barbarian paths and roguish archetypes in the Order of the Ebon Star—a splinter group founded by ghouls who oppose the alliance with the vampires—to the bard’s College of Echoes, to the paladin’s Oath of the Plaguetouched, to Imperial Hunters, to the wonderful White Necromancer. In all, there are a dozen new subclasses, all unique, grisly, and waiting to be hungrily devoured by players eager for a walk on the dark side. We also have four new backgrounds, a host of Underworld-themed spells, and even a short bestiary of Underworld creatures, several of them available as familiars.

So that’s the Guide. Now, to Underworld Lairs. Fourteen adventures in fourteen new locations. Several of them, like “The Throttle,” which details a checkpoint on the most traveled route between Zobeck and Darakhan, the darakhul capital, could easily be worked into the story in Empire of the Ghouls but could just as easily work elsewhere. It could slot in nicely right after “Everyone Lies” from Streets of Zobeck, for instance, should the ghouls in that adventure succeed in capturing Lady Marack and the players pursue. “Starlit Chambers,” set in caverns deep below Tannenburg Castle, which are held by the Order of the Ebon Star, could serve as a base of operations for characters taking the aforementioned subclasses connected to that order or as a location in an above-ground campaign against the vampires of Morgau. “The Sanguine Lodge,” which is set in a “sturdy mountain lodge” in a passage through the Cloudwall Mountains is a 3rd-level adventure that features the followers of Marena and, as such, would make a great introduction to the Red Goddess’s cult prior to running “Blood Vaults of Sister Alkava” from Eldritch Lairs (which is how I personally plan to use it). “Closed Throat Pass” can actually be either a subterranean passage or a narrow mountain pass, depending on the GM’s needs and preference and as such could be used just about anywhere. It’s protected by a ghost knight named Sir Pravus and a troop of ghouls and if set in the mountains could take place in the Cloudwalls just like “The Sanguine Lodge.” Alternately, Underworld Lairs suggests that it can be placed between “Cathedral of Ten Thousand Flames” and “Caverns of the Soul Rivener” to comprise a three-part storyline, a nice mini-campaign in its own right.

And while “The Forest of Forgetting” and “Breaching Worm Citadel” are high-level adventures that are suggested as ways to extend the story of Empire of the Ghouls after that book’s conclusion, what I like best about Underworld Lairs is the way that the fourteen adventures in this book could, with very little tweaking, form the basis of a campaign in their own right. And since quite a few of the adventures feature antagonists whose heinous activities are just as much a threat to the Imperium as they are to surface-worlders, Underworld Lairs could form the basis of a great campaign made up of PCs from the Underworld Player’s Guide who are citizens of the Ghoul Empire. Yes, Lairs can be used to expand Empire, but really, it’s a whole second book’s worth of ghoulish adventure that can be devoured whole-hog on its own or eaten in bites along with other courses. However you want to use the material in these two books, your only complaint will be that there’s just so much of it you’ll never use it all. I can’t wait to play Empire of the Ghouls when one of my three Midgard campaigns finish, but with Underworld Lairs and the Underworld Player’s Guide, I’ll be tearing bloody pieces out of the Ghoul Imperium and feeding them to my hungry players long before I get there. And that’s going to be devilishly delicious.

Lou Anders is the author of the novel Once Upon a Unicorn, as well as the Thrones & Bones trilogy of fantasy adventure novels (Frostborn, Nightborn, and Skyborn), and the novel Star Wars: Pirate’s Price. He has also done role playing game design for Kobold Press, River Horse, and 3D Printed Tabletop. In 2016, he was named a Thurber House Writer-in-Residence and spent a month in Columbus, Ohio teaching, writing, and living in a haunted house. When not writing, he enjoys playing role playing games, 3D printing, and watching movies. He lives with his wife, children, and two golden doodles in Birmingham, Alabama. You can visit Anders online at louanders.com, on Facebook, Instagram, and on Twitter at @Louanders.

The post Down in the Underground: Underworld Lairs and the Underworld Player’s Guide appeared first on Kobold Press.