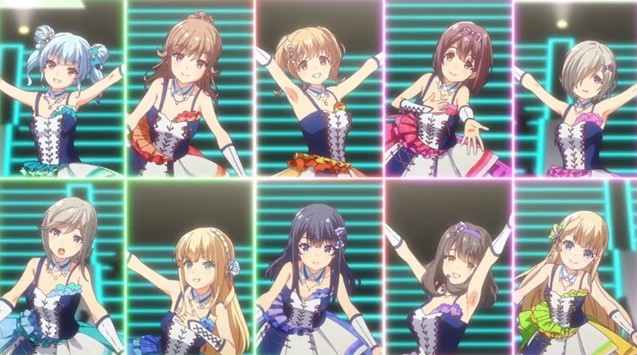 Idoly Pride is the story of new and upcoming idols who start from their high school days to shed blood, sweat and tears to become the biggest idols in the world. The story starts with the unlikely friendship of Mana Nagase and Kouhei Makino. Mana pulled Makino into the idol industry to be her assistant producer and be with her through her journey of becoming the world’s top idol. But the competition is harder than ever with the introduction of the Venus System, an AI that ranks idols without bias using various factors. With just three episodes out at the time of writing, this anime has already won our hearts at Honey’s Anime with its promising music and stunning visuals. As an added bonus, we have some kawaii characters who just stole our hearts almost immediately. Read on to see what we think about Idoly Pride with its plot, animation style, characters, setting, and of course above all, its breathtaking aww-some music.

Okay, nobody expected Mana to just die in the first episode just when things were getting interesting for her in her career and with her friendship with Kouhei. (We all shipped them so hard!) However, the cherry on top was the ironic development that led to Mana’s ghost coming back! It was unusual for an anime with such bright tones to throw us off like this but the other episodes removed that doubt for us and accepting this new change anyway. Moreover, seeing Kotono Nagase’s backstory really made the story come alive for us, not to mention the angelic and wholesome Sakura Kawasaki. The interesting supernatural developments are thrown in again with Sakura sounding exactly the way Mana did. We at Honey’s Anime suspect that it probably has something to do with how her heart pulled her into this idol industry, rather literally.

Studio Lerche’s standard breathtaking animation style has colored this anime in the best possible way. From the detailed characterization of the characters (and there are many!) to choosing bright yet warm colors completes the whole visual package and makes them stand out even more. The animation style lends itself to the story, enriching it in key moments and blending in without losing quality during other important plot points rather seamlessly. Mana and LizNoir’s concerts were such a treat for the eyes to watch, making you feel like you’re a part of the show itself. Also, can we just agree that the idol costumes are absolutely gorgeous?

Soulful Awe-inspiring Music For the Win

“IDOLY PRIDE” by Hoshimi Production is our opening song that is warm and filled with realistic hardships, topped with a dash of hope and the will to continue fighting to make your dreams come true. The opening truly sets the tone for the anime and its slice of life elements. Moreover, Mana’s song interwoven through the episodes is like a strength for the characters and for us who watch this show. (reminds you of a certain singer from Dr. Stone!) You’d think this is enough for an anime but for a music anime, it is nowhere close. The endings have changed with each episode so far and we’re excited to see if this is a continuing trend through the anime.

Moe Characters That Actually Have Depth?!

Idoly Pride stands tall with its beautiful, breathtakingly feminine and girlish characters who seem fleshed out, realistic, and actually serve a purpose in the overall story instead of being thrown in just for the kawaii factor. Each character is distinct and we hope the anime holds this up throughout the show as we learn more about each character and their backstories. But above all, the rivals of our upcoming group, LizNoir is just absolutely stunning and put together. They respect this new group instead of stereotypically looking down on them from the get-go. They acknowledge that everyone starts from somewhere and that was very interesting to watch. We fell head over heels for this group almost immediately. Their choreography was seamlessly awe-inspiring to watch, setting the standard high for us and we certainly hope this anime delivers.

Music anime filled with stereotypical kawaii characters may not be everyone’s cup of tea because it can feel very predictable. However, Idoly Pride has shown much promise in just three episodes by pulling you in and making you feel like a part of it, and showing that there is more than what meets the eye. We hope that you pick this series up with us and join the ride. The journey of an idol is not for the faint-hearted! What did you think about our first impressions of Idoly Pride? Are you already up to date with this series? Or are you planning on picking it up soon? Let us know in the comments below!