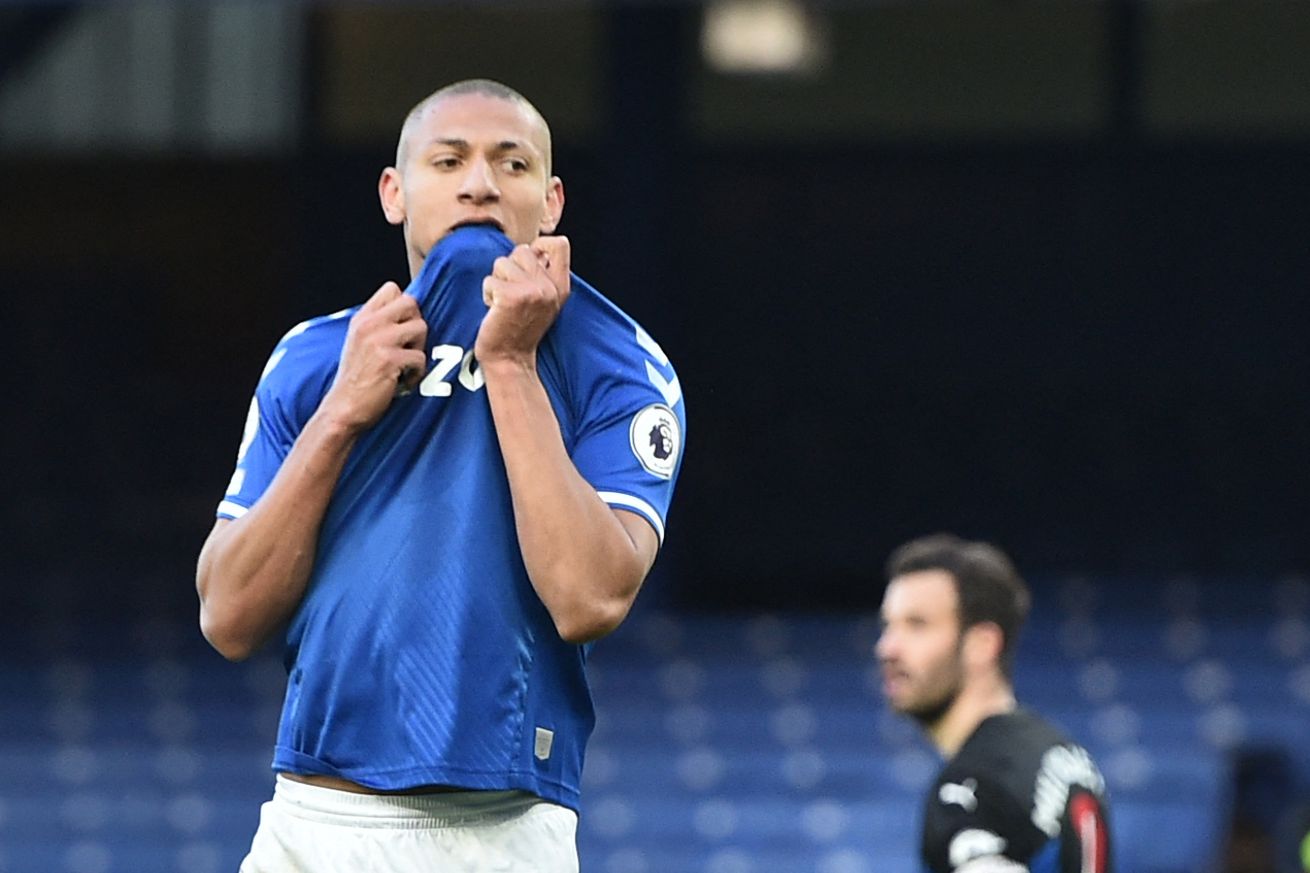 Everton vs Crystal Palace: Live & How to Watch | James scores, 1-0!

Toffees return to action with all to play for

59’ - Oooh!! Richarlison plays DCL in and his finish is just too close to Guaita who saves. Could have killed the game right off there.

56’ - JAMES SCORES!! Everton lead 1-0!
Digne’s low cross is nudged towards goal, saved by Guaita that flashes by a sliding DCL. Coleman finds an onrushing James to hammer in at the near post!

53’ - Everton break and Digne’s centre falls to Sigurdsson outside the box with time to shoot. He lines up a low shot to the far corner and it’s deflected out for a corner, deflection could have gone anywhere.
James takes the corner, Mina gets just a touch and it flies past Richy too as it goes wide.

47’ - Richarlison wins an early freekick, James into the box and Guaita collects.

Halftime Thoughts - Lack of quality in finishing is holding Everton back, they could have easily had three or more goals with better finishing. Palace remain dangerous on the break, and the Blues will struggle to win this one if they go behind.

45+2’ - Sigurdsson holding up Zaha in the middle of the park and Palace have a late freekick to try put into the box before the halftime whistle ends proceedings.

43’ - James grasscutter from distance flashes wide of the far post.
Richarlison wins a freekick that James curls into the box, Richy gets to hit and heads over. So. Many. Chances. Missed.

40’ - Kouyate clips Richarlison just outside the box, on the left side. Richy has the ball and is very insistent he will be taking this freekick, even as Digne, James and Sigurdsson hover.
The Brazilian curls it towards the far corner, it’s wide. Not a bad effort, but should have at least hit the target.

36’ - Palace’s passing has been much better, but the Blues have had the better chances. Still 0-0 here.

29’ - Really good passage of play there for Everton but have not been able to find the back of the net. Missing that quality in finishing.
Gomes has gone down away from the action clutching his hamstring, and looks like his afternoon is done. Gylfi Sigurdsson is coming on.

25’ - James now gets in the act! Another delightful cross from Coleman is controlled beautifully by James in the box but his volley is way over.

23’ - Two more chances!! Richarlison now dances through the defence and shoots, but it’s straight at Guaita who blocks it. The rebound falls to the Brazilian who tries to go round the goalie and is foiled. Argh.

21’- Another chance! Coleman with a lovely juke and then cross into the box, Richy gets his head to it and just over.

20’ - Chance! Holgate with a searching long ball finds Calvert-Lewin through on goal, Guaita is out quick and saves from DCL!

15’ - Davies brings down Eze on a break, Kevin Friend books Yerry Mina for something we didn’t see on the telly though.

12’ - James with a great diagonal that falls on Digne’s foot, but no one reads his dinked cross and Guaita can collect.

7’ - Chance! Gomes robs Milivojevic in the middle and Richarlison is free to run at goal.. and clearly offside too. Gomes really should have kept the ball there and let the Brazilian get back onside.

6’ - Palace win a corner after a Zaha shot was blocked.

Carlo Ancelotti is going to go with a three-man backline with James Rodriguez starting but surprisingly Allan is not even in the squad, is he injured again?

It’s been a while now since Everton last played, so much so that this remaining stretch of ten games is going to be like a mini-season of its own. Carlo Ancelotti has had some time to work with his squad without the pressure of playing twice a week, and while a couple of key players remain out, they have had some time to rest up and heal too.

The ask is pretty straightforward - the Blues need to pick up about 16-18 points of the last thirty on offer to secure European football. They will be playing a number of those last fixtures against sides also fighting to get into the top six, and how they do in those ‘six-pointers’ will likely determine their final standing in the table.

First though is Crystal Palace today. Everton went into the international break playing some uninspired football and the results matched those performances. A return to the high tempo attacking game that brought success earlier in the season will be required to ensure European qualification.

Roy Hodgson’s Eagles are a tough side to play, imposing themselves physically and though they have limited attacking ability, they are capable of scoring on the break through a number of players.

Gamethread: Live blog above starting one hour before game time

The two sides met in London earlier this season with Dominic Calvert-Lewin and Richarlison grabbing the goals in a 2-1 win. The Eagles last visit to Goodison was in February last year when fans were still allowed in stadiums, with the crowd roaring the Blues onto an exciting 3-1 display with Bernard and the aforementioned pair all bagging goals.

Everton vs Crystal Palace: Live & How to Watch | James scores, 1-0!