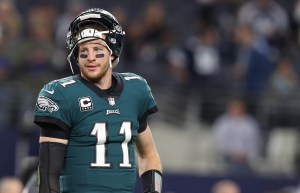 💌 Love Philly? Sign up for the free Billy Penn email newsletter to get everything you need to know about Philadelphia, every day.

Philadelphia’s Carson Wentz era is over. The Eagles dealt their once-star quarterback to the Indianapolis Colts for a set of future draft picks.

The trade negotiations were rife with drama and controversy, something that became par for the course during the QB’s time in Philadelphia.

When Wentz arrived in 2016, it was supposed to be a new era for the Birds. Along with coach Doug Pederson, he would lead Philadelphia to its first Super Bowl and more, reigniting the franchise.

Of course, Philadelphia got its Lombardi Trophy, but with backup quarterback Nick Foles — who was subsequently traded away. It’s pretty much been downhill from there.

Here’s a look back at the highlights and lowlights of Wentz’s career in Philadelphia, using GIFs of the man himself.

‘Ultimate underdog to No. 2 pick’

The Eagles execute two trade deals to get the quarterback out of North Dakota State. After snagging the 2016 No. 8 pick from the Miami Dolphins, they trade to get the No. 2 pick from the Cleveland Browns. With that, they take Wentz.

‘The showdown nobody wanted’ (part 1)

Eight days before the start of the season, Eagles trade then-starting quarterback Sam Bradford to the Minnesota Vikings. Wentz is named the starting QB.

Rookie Wentz and the Eagles have a 3-0 start to the season. Wentz wins NFL Offensive Rookie of the Month for completing 64.7% of his passes, five touchdowns and no interceptions.

In 2017, Wentz starts his own charity rooted in his religious beliefs. Called the AO1 Foundation, the name stands for “Audience of One,” a phrase taken from the Bible. The foundation is successful from the start, raising nearly $1 million in its first event, a celebrity softball game.

In Week 14 of his sophomore season, Wentz leaves the Los Angeles Rams game with a knee injury. MRI reveals it to be a torn ACL, and he is out the remainder of the season.

Knee injury supposedly healed, Wentz gears up for another season and ranks third in the NFL Top 100 Players of 2018 — highest list debut in the history of the league. Wentz returns as the starter Week 3 against the Indianapolis Colts.

‘Riding Nick Foles to the playoffs’

Wentz suffers a back injury and is out for the rest of the season…again. Nick Foles again leads the Eagles to the playoffs, where they lose in the first round to the New Orleans Saints.

Despite the back injury, Eagles double down for the next season by signing Wentz to a four-year, $128 million extension with $107 guaranteed. It’s meant to keep him at least through 2024 — and makes him the league’s highest paid player.

Wentz finishes the season with 4,039 passing yards, making him the first quarterback in Eagles history to pass for at least 4,000 yards. The Birds take the NFC East title with a 9-7 record. The post-season awaits.

Finally making his postseason debut, Wentz gets a dirty hit. He leaves the game with a concussion after helmet-to-helmet contact with Seahawks OLB Jadeveon Clowney, who is not fined. Wentz brushes it off as “a bummer.” The Eagles lose 17-9 and are out of the playoffs.

Though the Eagles outwardly express all the confidence in the world in their franchise QB, the 2020 NFL Draft arrives and they select another quarterback. Jalen Hurts is taken in the second round, the 53rd overall pick.

In the third quarter of a December game versus the Green Bay Packers, with the Eagles trailing 20-3, Jalen Hurts gets his chance. Coach Pederson puts him in to “spark” the offense, benching Wentz — but Philly loses anyway.

When Pederson announced Hurts would start against the New Orleans Saints, it was literally international news. The relationship between coach and franchise QB seemed to have soured unrecoverably.

Hurts did not work magic for the Birds, and their season ended 4-11-1. Who was to blame for the dismal showing? Eagles brass quickly landed on Pederson, letting him go on Jan. 11. Observers speculated that mean the team was taking Wentz’s side in the fight.

When the Eagles hire Colts offensive coordinator Nick Sirianni as their new head coach, everyone assumes it’s a sign Wentz will stick around. In Indianapolis, Sirianni worked under Frank Reich — who, when he was with Philly, had a really great relationship with Carson.

On the other hand, maybe not. Sirianni’s opening press conference tip-toes around the QB controversy with little mention of Wentz — and then the trade rumors really pick up. Instead of hanging to see if he or Hurts would be named starter next season, Wentz wants out. The Eagles begin juggling behind-the-scenes negotiations.

Aaand he’s outta here. Wentz gets traded to the Colts. The deal is rough on the Eagles, leaving them with a charge of about $34 million for the rest of that mammoth contract they’d signed less than two years before. Even though it’s the biggest “dead money” cap in NFL history, it’s considered a good move for both sides. Philly’s football squad gets to start anew, and so does Wentz. See ya on the field!