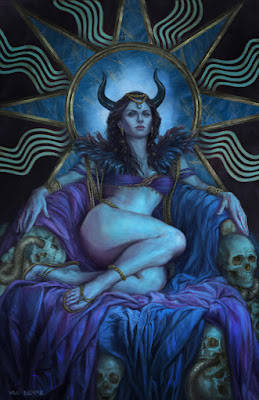 By what lofty title is she Called?- 1d10
[1]The Jade Princess.
[2]The Queen of the Living.
[3]The Widowmaker
[4]The Maneater
[5]The She-Wolf
[6]Maiden in Black
[7]Maiden in White
[8]Queen in Red
[9]The High Priestess
[10]The Enchantress
What luxurious outfit graces her form? - 1d10
[1]Sleek black leather.
[2]Fur coat from a dire or rare beast.
[3]Lizard or dragon skin shawl.
[4]Jewelry. She wears no clothing beyond gold and gem.
[5]The finest silk in the world.
[6]She is naked. She is only covered by wisps of smokey magic, sand, or posing.
[7]Humble black dress with a funeral veil.
[8]Skin-tight bodysuit, with her skin painted to match its pattern and color.
[9]Tribal outfit. Leaves, bones, animal skins.
[10]Traditional ornamental dress. Heavy makeup and expertly styled hair.
What dangerous creature is her faithful pet? - 1d10
[1]Wyvern. It has an animal mind, protecting her as though she was its mother.
[2]Massive wooly bear.
[3]Brass bull that snorts fire. Skin is as hard as metal, about an elephant in size.
[4]Two Tigers. She strokes them by her throne as loyal pussycats.
[5]Magical Panther. It's a panther that can turn invisible and “disappear” if found. Assassin.
[6]Champion Dog. Its form is like a great dane; ageless and unnaturally skilled.
[7]Pack of Wolves.
[8]Idiotic simpleton. He's a giant, 8ft tall, with metal bolted into his skin.
[9]Giant Newt. Can attack like a shark in water, or plop onto land like a crocodile.
[10]Massive Boa constrictor.
How does she seduce men (to their doom)? - 1d8
[1]By touching a lock of her hair. On her head, or shaven and given as a gift.
[2]By locking eyes with her.
[3]The slender caress of her hands.
[4]Her voice.
[5]The smell of her perfume.
[6]The sound of her music; plucking a lute's string.
[7]Sneaky love potion, mixed in with drink or food.
[8]Her dainty gifts, kind manner, and pleasing hospitality. One week under her roof is all it takes.
What powerful man is under her spell? - 1d8
[1]The local King, who is cheating on his rightful wife with her. She's politically unassailable.
[2]Great magician.
[3]Lowborn lumberjack. He's so strong he carries trees by himself.
[4]Master Thief. He can break into palaces, steal anything she desires.
[5]Bishop or other reigning official. May not have broken vows yet, but will if she wants.
[6]Warlord, or Orc King. Has an army of barbarians at her beck and call.
[7]Two of the wealthiest merchants in the land. Cutthroat, the two constantly buy out kingdoms to have better access to her favorite flower; hire assassins to kill each other. She is amused.
[8]The world's greatest duelist- total chauvinist. Bombastic personality and arrogant womanizer- but infatuated with the Sorceress. Kills to defend her honor and wishes to marry her.
What symbol is associated with her magic? - 1d12
[1]Crescent Moon.
[2]Distant Star.
[3]Twisted crafts of wicker and hazel.
[4]Snakes.
[5]Human skulls.
[6]Animal fangs and horns; fashioned into necklaces or crowns.
[7]The loom. Enchantments spun as wool.
[8]An empty chalice.
[9]The dagger and a circle or line drawn in sand.
[10]The bubbling cauldron.
[11]Green, blue, or purple fire.
[12]A man tied to a tree, upside down, hanging from one ankle.
How did she gain her magic powers?- 1d6
[1]She was born with it. Her magical lineage descended from the fair folk, or of a monsterous race.
[2]Was a gift from a Goddess.
[3]Taught to her from her Mother. This family's secret power runs from Mother to Daughter.
[4]She learned it herself through hard work; her ambition is obsession.
[5]She seduced a magical creatures; an Elf King or Otherworldly Man. When he slept in his bed, she stole the power from him and fled.
[6]Seduced a well learned scholar, manipulated him into researching dark secrets and shattering his mind from ancient secrets. Discarded him when he was no longer useful.
What is the nature of her vanity?- 1d6
[1]She wishes to be the most beautiful woman in the world. Nothing more, or less.
[2]To be desired is to have power over others. To be the most desired, is to be the most in control.
[3]The power of her magic comes with a price- a disdain for all beneath you.
[4]She is scornful and hateful. Every woman more attractive then her is despised simply for being born that way. She was born as hateful as a fire.
[5]Beauty is fleeting. Art is immortal. To have your beauty made into art and story is to have your beauty become immortal. No wrinkle blemishes a portrait.
[6]It's not intentional. Forces outside of her have put her in this position. Manipulation is as natural to her as breathing is to us.
Source: themansegaming