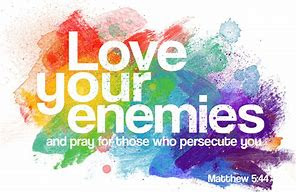 Epiphany VII - February 24, 2019
St. Phillip's Church, Laurel, DE
I have to admit, all of the lessons for today make me uncomfortable but especially the story from Genesis of Joseph and his brothers. And, yes, the Gospel of the teachings of Jesus from the disciple, Luke, too.
Do you know the story of Joseph? Not his namesake, Joseph, the husband of Mary and the earthly father of Jesus. You may vaguely remember “Joseph and his coat of many colors” from an old Sunday School lesson.
You may have even heard of the Broadway musical, “Joseph and the Amazing Technicolor Dream Coat.” And, maybe you caught the reference in Dolly Parton’s song, “The Coat of Many Colors (That my mamma made for me).”
But, do you know the story of Joseph? In this morning’s lesson we hear the part of the story of Joseph’s emotional reunion with his brothers. Joseph appears to have come to a place of peace about their profound betrayal. But, let me briefly catch you up to speed on the whole story.
The brothers were envious of Joseph because he had the gift of dreams, and although he was the 11th of his father, Jacob’s sons, he was the firstborn of Rachel and his father’s favorite. This favoritism was represented in the beautiful coat of many colors that was a gift from his father. 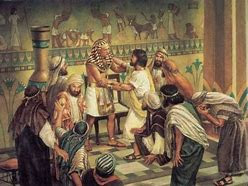 In their jealousy, the brothers intended to kill Joseph but decided instead to leave him for dead in a deep pit.
He was then sold into slavery, and when his brothers couldn’t find him where they left him, they faked his death. Joseph went from slavery to relative privilege, then to prison after being falsely accused of rape.
He languished there for years until he was remembered when the pharaoh needed help interpreting a dream. Joseph then enjoyed prominence as the second most powerful man in Egypt. Now, when he is confronted by his family’s desperation, he interprets this as divine providence.
Joseph reunites with his father and full-blood brother, saves them all from starvation, and brings them to Goshen to live in security.

And, you thought YOUR family was mixed up!
Jesus seems to be recalling his father’s ancestor’s story as he sets a seemingly impossible bar for us to live by.

I won’t ask you to raise your hands but I am going to ask the question: How many of you are sitting in this church right now and thinking to yourselves, “Well, he’s not talking to me. He was talking to his disciples, using Joseph as an example.”
Or, maybe you’re thinking, “Oh.My.God! I could never live up to that standard.”
Or, maybe you’re even thinking, “Man, I have really got to work on forgiving so-and-so.”
Or, perhaps you may be thinking, “I really regret what I did to so-and-do. How can they ever find forgiveness for what I did? How can I forgive myself for what I did?”
I hope you have listened to these words of Jesus and this reflection of mine and are starting to feel just a bit uncomfortable, too.
Here’s why these texts cause me so much discomfort: Christians have often encouraged people to be silent about their pain, using the Bible as our justification. 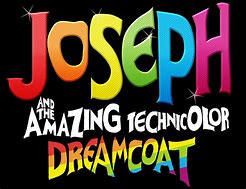 I can tell you lots of stories – true stories – of how these texts have been employed to silence the victimized so that others are not discomfited or inconvenienced by their difficult stories.

And, isn't that just what the church has done with the children - and women - who have been abused by clergy.
Or, some of us use these texts as window dressing to cover up our pain but let people think we’ve got it all together. One woman once said to me, “You know, I’d love to go to your church but, well, I’m just not like them.”
When I asked her what she meant she said, “Well, everyone always looks so happy. They have perfect lives and perfect jobs and perfect families and they’re always smiling and I’m just so far from all of that I don’t even know how to relate. I just wouldn’t fit in.”
I haven’t had the chance to speak with any of you about the stories of your lives, but I know one thing for a fact: You’ve got stories. Lots of stories. Stories of hurt and betrayal. Stories of pain and tears and loss.
And, I know for a fact that while some have reached a resolve and found a place of peace, others of you have not. But, while you have found the strength to move on, you are still carrying around the pain of all of that. I know this because underneath this fairly healthy neurotic exterior beats the heart of a woman who has her own stories, too.
That’s not the question. The question is this: What ever are we to do about this teaching of Jesus? How are we ever going to reach the seemingly impossible standards he has set?
I think before we can get to the ‘how’ we need to look at the ‘why’. Why do we do these things to hurt others? Why should we suffer the things others did to us in silence? Why should we forgive? Why would others forgive me if I can’t forgive myself?
There’s a wonderful children’s story called “Old Turtle and the Broken Truth” by Douglas Wood, illustrated in gorgeous watercolor by Jon J. Muth. Like so many children’s stories, I think it contains the wisdom we need to find the strength to live into the teachings of Jesus.
It begins,

“Once, in a beautiful, faraway land… that was somehow not so very far, a land where every stone was a teacher and ever breeze a language, where every lake was a mirror and every tree a ladder to the stars, into this far and lovely land there fell . . . a truth. It streaked down from the stars, trailing a tail as long as the sky. But, as it fell, it broke. One of the pieces blazed off through the night sky, and the other fell to earth in the beautiful land.” 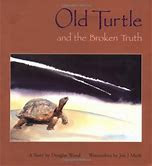 The story continues that the various animals of the beautiful land noticed the fallen piece. Crow thought it a beautiful shiny truth but something didn’t feel right. He thought something was missing.

Fox, Coyote, Raccoon, each picked up the shiny object and noticed its truth but they found that it had rough edges. “We do not need this broken truth,” they said, “We will find a whole one.”

Butterfly and Bear also discovered the truth, draws by its sweetness, but each found it bitter tasting after all. “There is something missing in this truth,” they thought and left it alone.

Then, a human being found it. He had been listening to the breezes and enjoying the beauty all around him and he found the Broken Truth. On it was this writing:

The man held it carefully, thinking it was the loveliest thing he had ever seen. He tucked the Broken Truth into a safe place and kept it. Sometimes he would take it out and admire it. And the truth sparkled just for him, and whispered its message to him alone. And, the man thought he had never felt so proud and so happy.

The story goes on, as children’s stories are wont to do. The man finally brings the Broken Truth to his people – those who look like him and sound like him and dress like him – and everyone is happy. For a long time, everyone is happy.
Soon, others come to their land – people who do not look like them or sound like them or dress like them but they want the truth that they have because they want to be happy like them. And fights break out and wars begin and there is destruction and death, all because everyone wanted to possess this Broken Truth. 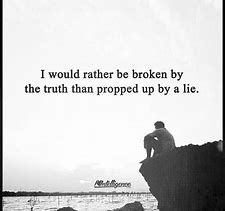 Until one day…. A Little Girl came to find Old Turtle.

“She had traveled very far, and crossed the Mountains of Imagining and the River of Wondering Why and had found her way through the Forest of Finding Out.” Finally she arrived at the Center of the World where she saw so much beauty she could hardly speak. It was there that she found Old Turtle.
She said to Old Turtle, “Where I live, the earth is sore and people are suffering. Battles are fought, over and over again. People say it has always been this way and it will never change. Can it change, Old Turtle? Can we make it change?”
That’s when Old Turtle told her the story of the Broken Truth. “It is because it is so close to a great, whole truth that it has such beauty, and people love it so,” said Old Turtle. “It is the lost portion of that Broken Truth that the people need, if the world is to be whole again.”
The people only had one part of the truth and that truth is this:

But, the other part of the truth, the part that makes it whole is this:

“Remember this, Little One. The Broken Truth, and life itself, will be mended only when one person meets another – someone from a different place or with a different face or different ways – and sees and hears…. Herself. Only then will the people know that every person, every human being, is important, and that the world was made for each of us.”

You know, in Inda, people greet each other with a bow. They are bowing to the spark of divinity that is in each other. How different would the world be if we bowed to each other when we met? If we acknowledged the divinity - the goodness, the potential to do great good - in each other?

We might just have a shot at changing the world for the better. 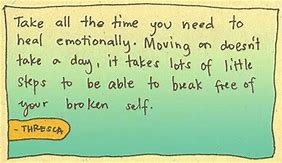 If we understand that truth, we might have a glimpse of understanding the truth of the teaching of Jesus: “Do not judge, and you will not be judged; do not condemn, and you will not be condemned. Forgive, and you will be forgiven; give, and it will be given to you.”
That doesn’t make it easy. The truth rarely is.  But you can begin to find it after you cross the Mountains of Imagining and the River of Wondering Why, and make your way through the Forest of Finding Out.
There, you might listen to the stones, which have something to teach, and to every breeze, which has a language to speak, and where every lake is a mirror and every tree a ladder to the stars. There, you might connect with the enormous beauty of the world and the mystery and wisdom that is at the center of life.
There, into your midst, an ancient stone of truth may fall and your brokenness will be healed by the wholeness of the truth which Joseph learned and Paul began to understand and Jesus came to teach: