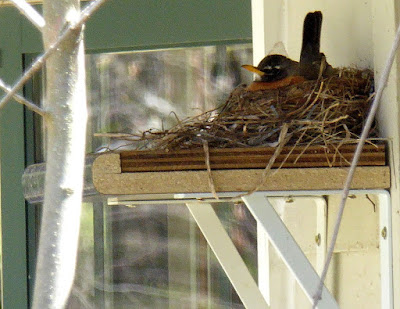 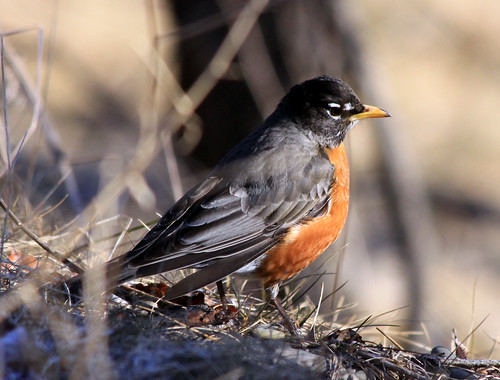 Back on April 27, I got a message from Barbara Kelly in Hayward. She wrote:

I just noticed that a pair of Robins are making a nest on the top of our tall step ladder that is under the eaves, leaning against the back of the house. I climbed up to look, and there are no eggs in it yet. If we built a platform in the same location and gently placed the nest on it, might they still use it, or would they abandon it? I hate to disturb them. I think they just began to construct the nest a few days ago. My husband wants to use a small piece of countertop, about a foot wide.

I said that might work, and sure enough, she soon wrote back:

He put sides on the platform now, and the front has a raised lip, so the nest won't be able to slide off. I just attached some birch bark pieces to the base of the platform, to give it a more natural, rough surface.

Then, of course, came the wait-and-see period. I often don’t hear from people after getting this kind of question, but Barbara wrote back that very day to say:

The female just flew up to the platform, so I hope that's a good sign.

I'm so happy! The robins have been bringing more nest material to the platform all morning!

After watching mama Robin bring new nest materials to the nest on Tues & Wed, I then saw both Robins in the back yard each day but didn't notice any visits to the nest. This had me worried. But in the last 15 mins or so mama Robin has come to the nest twice. She came the second time about 5 mins ago and is still on it.

I responded that robins lay usually four eggs. They don't sit on them to incubate until they have a full clutch. That way all the babies are at the same stage of development and hatch out close together.

Do I need to be concerned about disturbing Mama Robin from her nest for short periods of time? I try to go out when Mama Robin is not on the nest, but this is not always possible…This morning, I went around the far side of the house, farthest from the nest, and put out organic raisins for the Robins and fresh water in the bird bath. I kept my head down and did not look at the nest. Mama Robin did not fly off the nest and, after I came back in the house, she went and ate some raisins and drank some water and then went back to the nest. Later, when I came around the other side of the house, which is closer to the nest, to put out hummingbird feeders, she flew off the nest but then came back shortly thereafter. I also go out in the early evening to bring in the bird feeders, so a bear won't get them.

The mother robin is clearly comfortable with Barbara’s presence. When robins start associating us with nutritious food, they often form some kind of bond, whether it’s borne of practicality, gratitude, or simply sensing a kindred spirit.

On May 12, Barbara sent me a photo with this message:

Here's a photo of Mama Robin on her nest. I believe she laid her eggs on May 3 so I'm thinking this Friday, May 15, would be the first day that the young might begin to hatch. Could cold temps possibly extend the incubation period? Temps have been pretty cold the last few days/nights.

I told her that robins have one functional ovary and ovulate one egg at a time, so a clutch of four takes a minimum of four days to produce, and she doesn’t start sitting on the eggs to incubate them until the clutch is complete. She responded:

OK, so I think May 15 may be too soon because I'm not sure she was sitting regularly on the nest by May 3. We left the window closest to the nest ajar at night, hoping that some warmth might escape and help her keep the eggs warm. This is very exciting to observe, and I feel so privileged to be able to do so!

On May 17, she sent another photo.

I believe the first baby Robin has hatched! I noticed half of a blue shell on the ground this morning. I also saw Papa Robin visit the platform for the first time and peer into the nest before flying off.

Got my first glimpse of a baby Robin today, from a distance, with a telephoto lens.

And on the 24th, she was able to confirm that the robins have at least two babies. 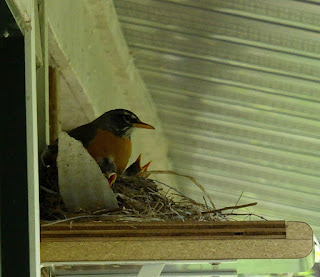 It’s so thrilling to watch birds nesting from start to finish, but so tricky. Barbara is respecting her robin family’s need for privacy, which is also protecting them from the curious eyes of jays and crows, but that means she can’t see the nest from an angle that would allow her to count the eggs or hatched chicks.

Nests, eggs, and baby birds are so fragile and vulnerable that it’s tricky investing our hearts in a growing family. A hawk killed all the baby robins in another friend’s nest last week, after she’d watched the nest from the start—she was heartbroken. But the robins invest themselves, body and soul, into each nest, and enough survive to keep robin numbers healthy and strong. It’s been lovely keeping up with this nest vicariously, and very reassuring to know that Barbara is doing everything possible to protect the birds. Emily Dickinson famously wrote that “Hope is the thing with feathers that perches in the soul,” and right now hope is in short supply. I hope this robin family lives long and prospers. That’s also my hope for Barbara Kelly and for you, dear reader.
Source: lauraerickson