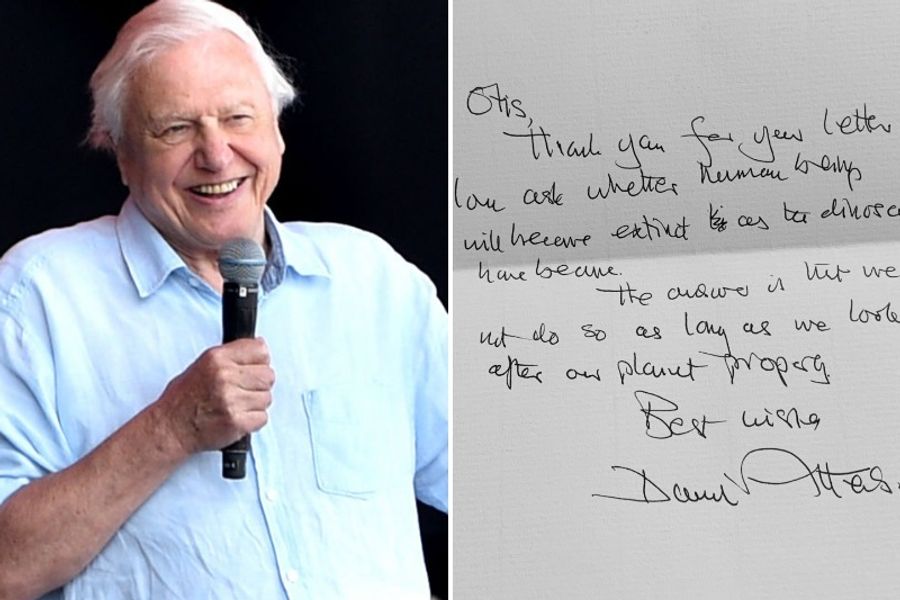 Sir David Attenborough may be a high profile national treasure, but he still takes the time to reply to inquisitive four-year-olds.

The broadcaster and environmental enthusiast, who turns 95 in May, recently replied to Otis Allen, a little boy in Cardiff, who was worried about the future of humanity.

Otis wrote to the star to ask if humans would be extinct one day, “like the dinosaurs”.

“The answer is that we need not do so as long as we look after our planet properly,” Attenborough replied.

My little boy (age 4.5) wrote to Sir David Attenborough to ask if humans would be extinct one day “like the dinosaurs”. Today he received this beautiful reply: “The answer is that we need not do so as long as we look after our planet properly.”

Sir David is 94. He is a wonder 💚 pic.twitter.com/JR2cgcA1Ay

Otis’ mum, Gerry Holt, says her son had asked her the same question a few nights previously when she was putting him to bed, and she was stumped on how to answer.

“I thought honesty was probably the best policy,” she tells HuffPost UK. “I said I didn’t know the answer, but I hoped not. I told him about climate change and how we need to look after our planet. We also talked about the work lots of amazing people, like Sir David and Greta Thunberg, are doing to make sure people are taking action to make a difference.”

The 38-year-old tried to focus on the small things the family could do to help, like recycling and eating less meat – and the next day they came up with a plan to write to David Attenborough for his opinion.

People on Twitter have praised Attenborough for taking the time to reply... even if his response was a little ominous.

Wow. That is fantastic. What a legend.

That so lovely, but a touch ominous!

Holt says she was “staggered” when her son received the response. “There’s something really special and poignant about a 94-year-old conservationist who has spent his life working to save the planet corresponding with a four-and-a-half-year-old who’s just at the very beginning of his journey to understand the impact of climate change and our behaviour on the planet,” she says.

“I’m a science communicator myself and I think it’s so important that kids learn from a very young age about what’s happening and the action we need to take.”

Otis was also thrilled. “He’s really fascinated by Venus flytraps at the moment so he’s been watching video clips of Sir David talking about them. His little face lit up when I read the letter to him this morning,” says Holt. “He knows who Sir David is and that he’s special – but I think he’ll need to be a bit older before he really understands the significance.”

His little face lit up when I read the letter to him.

Writing a letter to the TV legend is seemingly the best way to get in touch, after he ended his brief foray with Instagram.

He previously said he receives as many as 70 letters each day from fans. “I do my very best [to respond to them all]. Sometimes people, mercifully, don’t actually put their address on because people are so unaccustomed to sending letters,” he said.

“If you wouldn’t mind including a self-addressed stamped envelope I’d be delighted to reply,” he added.