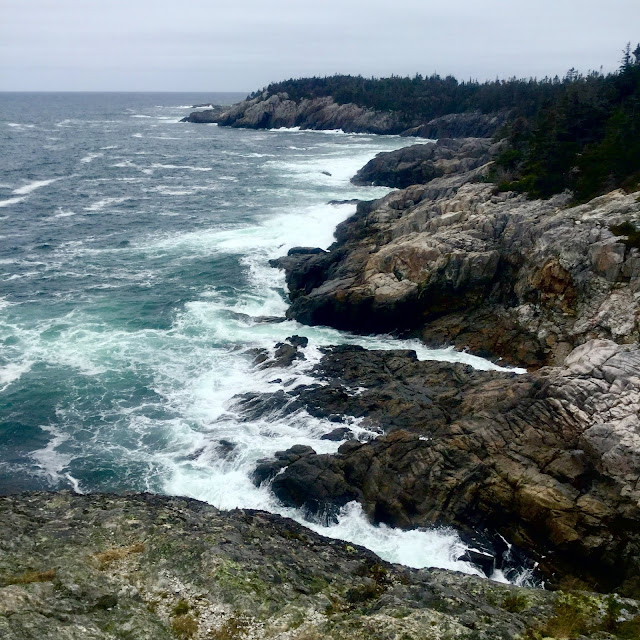 As with our canoe trip the previous week, we were dragging our feet about getting out to Isle au Haut. I’d made the reservation for Duck Harbor Campground back in early April, which is pretty much the only way to get a reservation for the five-site, National Park campground. As the only public camping area on Isle au Haut, its sites are in high demand. The sites are deluxe – perhaps what some would call ‘glamping’ if you rigged-up a few string lights. Each site has a three-sided shelter, a picnic table and fire ring. There’s a couple of outhouses, and drinking water comes from a well just down the trail. It’s the perfect base camp if you’d like to spend a day or two exploring the rugged and remote southern end of Isle au Haut, either by paddling or on foot.
If you’re just tuning-in, Isle au Haut is the big island (about 6 miles long and 2 miles wide) that lies 5 or 6 miles south of Stonington, our home on the Maine coast. Much of the island is part of Acadia National Park, but unlike the heavily-populated part of the park on Mount Desert Island, which is thick with tour busses and very casual visitors, access to Isle au Haut is by boat only, which has a way of weeding-out the riff-raff. It takes a little effort to get out there.
Of course, as the big island on the horizon, it also has a way of attracting people who don’t know what they’re getting into. A decade or so ago, Outside magazine ran a short, rather misleading piece touting the island’s merits, suggesting that novice paddlers ought to rent a kayak and just head-out to the island, flagging-down a lobster boat along the way to grab dinner, and then “crash” in one of the lean-to shelters. For a while at Old Quarry, the ‘kook’ factor, already high, greatly increased. I still encounter paddlers whose plan is simply “Isle au Haut,” never mind the archipelago along the way, or the fact that much of the shoreline there is private or difficult to access. (Or the fact that paddling skills, including navigation might come-in handy). There’s a tiny village near the island’s north end, home to about 40 year-round residents and more in the summer. 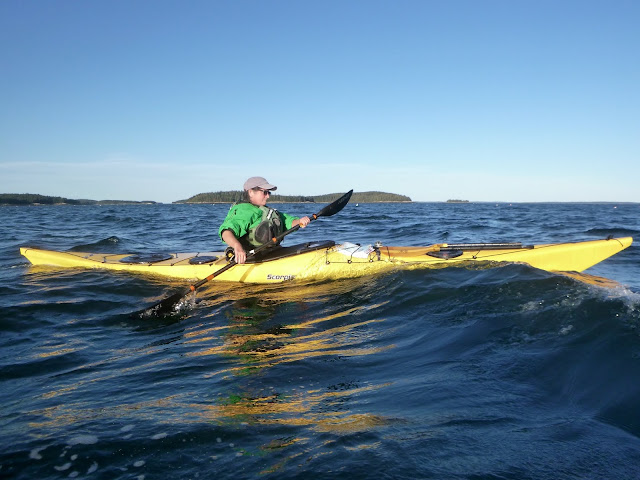 As is often the case for us, getting out the door took more effort than it should have, and we didn’t launch until sometime in the afternoon. We had the current and a north wind helping us along, but if we’d continued to Duck Harbor we would have arrived around sunset. 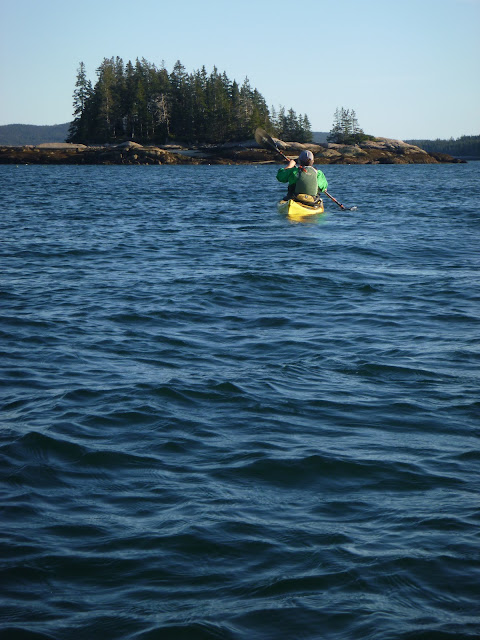 After 45 minutes of paddling, we paused below the campsite on Harbor Island, eyeing the sun sinking toward the Camden Hills, and decided to spend our first night there. We had the maximum 3-night reservation at Duck Harbor, but as much as we wanted to get there and wake the next morning to a full day, we prefer to avoid late-day arrivals, especially when the seas are lively, as they were even in Merchant Row. So we camped on Harbor the first night. 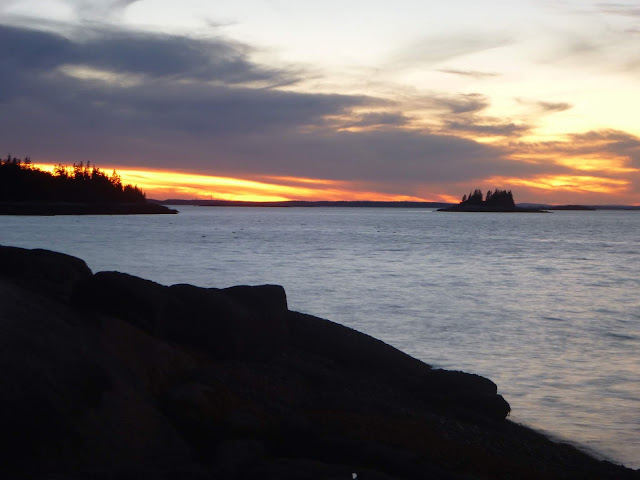 The northern campsite on Harbor is a favorite (although I suspect I might say the same of any island in the archipelago when I happen to be camping on it). The granite ledge slopes gradually down to the water, where a cushion of rockweed makes it easy to pull a kayak ashore. We pitched our tent on the soil just above the ledge. I quickly set-up the stove on a particularly flat-topped boulder to cook dinner, and Rebecca remarked that I seemed to have the routine worked-out. I’d camped there a few weeks earlier with a client and used the same rock, and had probably used it in the past as well. There were a few mosquitoes, but we carried our dinner to a windier, bug-free outcrop and watched the sunset. By bedtime (pretty early these days) the wind further shifted northward, and it rustled our tent fly all night. 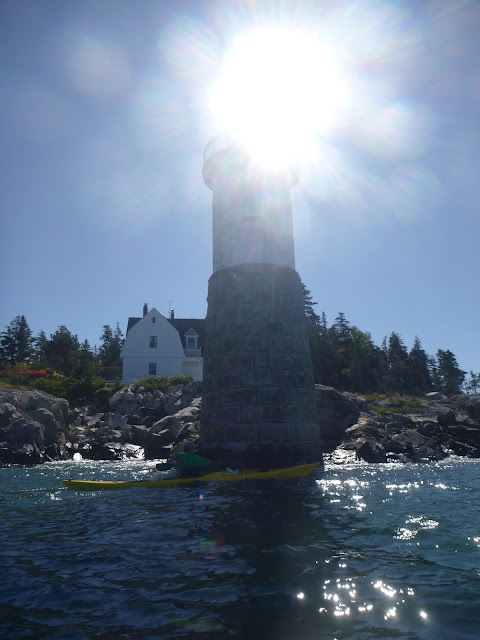 By Monday morning, we’d lost our previous sense of hurry and took our time leaving Harbor Island and then meandering out through the Isle au Haut Thorofare, past Robinson Point Lighthouse, and then the last couple of miles to Duck Harbor. 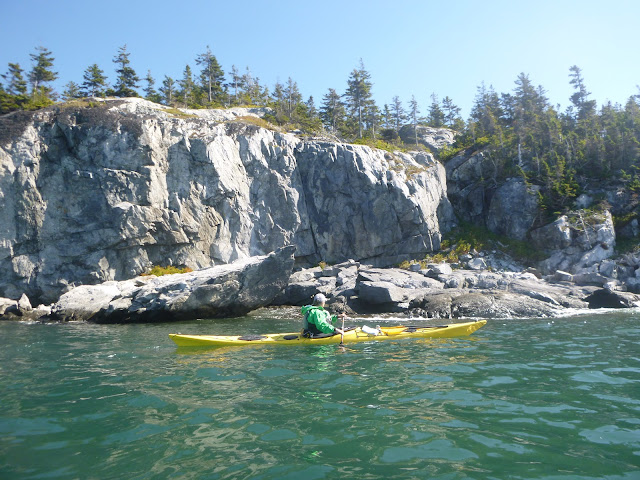 We parked our boats by the trail and carried our gear in Ikea bags up to Site #5. Only two other sites were occupied – perhaps thanks to the cool, windy weather and a rainy forecast. We’d stayed in the other sites, and this was our first time in this one, which is set-apart from the others, a little more remote, adjacent to a trail leading out to a cobble beach. We ate a late lunch and took a couple of walks, finally watching the sun begin to sink from the rounded granite hump of Ebens Head. 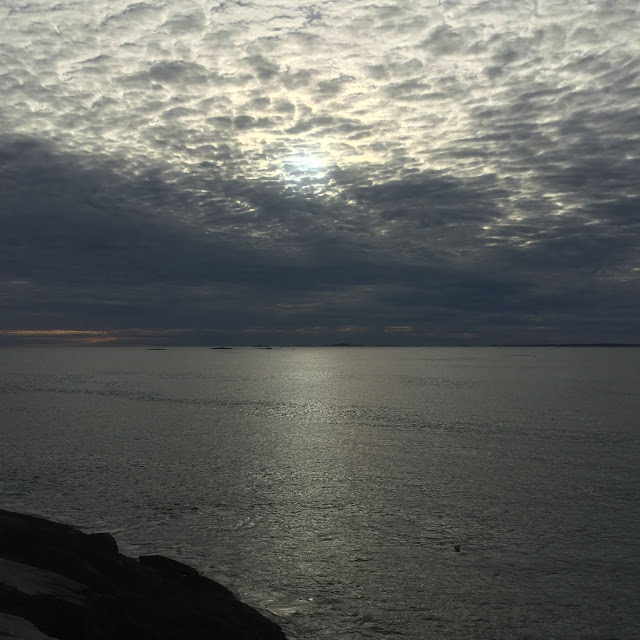 The first time we camped at Duck Harbor, years ago, we thought we’d use it as a kayaking basecamp. One could do that, especially if you wanted to don a helmet and get into the extensive rocks and ledges along the island’s southern end. But lately we had paddled enough that the simplicity of walking seemed a luxurious indulgence. Plus, you get to wear dry clothes. We headed-out around Western Head, pausing frequently to take pictures and just sit and take it in. 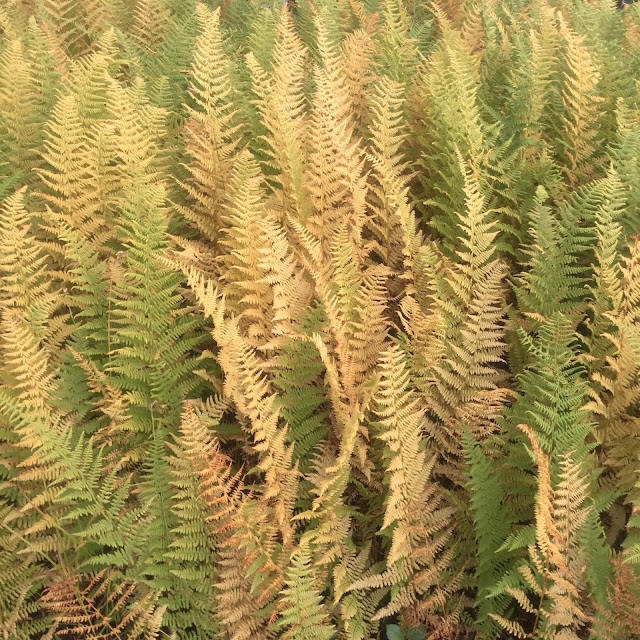 It was nearing high tide when we arrived at Western Ear, the small island barred to Western Head at the southern end. Meaty waves rolled-in from the southeast, colliding over the bar with smaller ones from the west. We watched as the tide rose, mesmerized, regretting a little that we weren’t in our kayaks – I’d never seen such waves at this spot. Usually when I paddled around Isle au Haut I was out here around low tide. But this was a day to sit on shore and watch, which became more obvious as we walked the Cliff Trail. 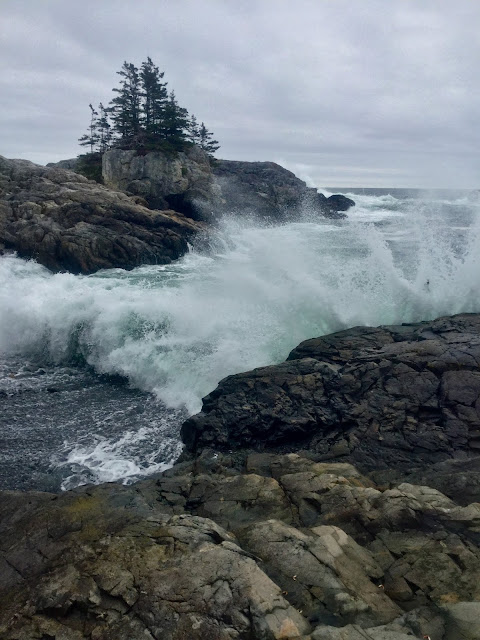 At every spot where the trail poked-out for a view of the waves crashing against the rocks below, we had to stop and take it in. 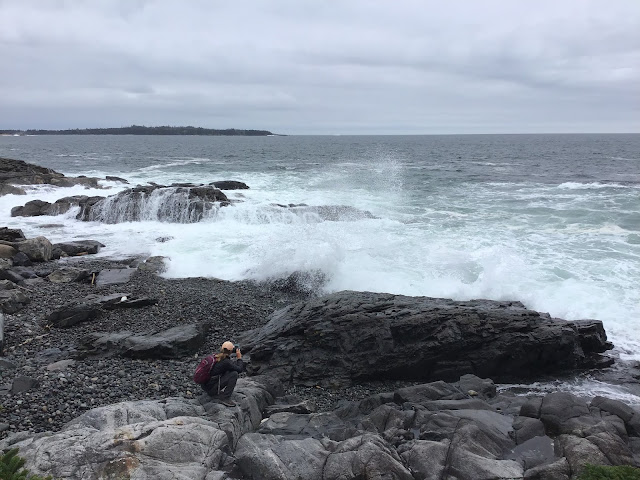 We ate all our snacks. A walk that might take 2 or 3 hours grew into a 5 or 6-hour hike. We encountered no other hikers that day, and the only boats we saw were a couple of lobster boats. 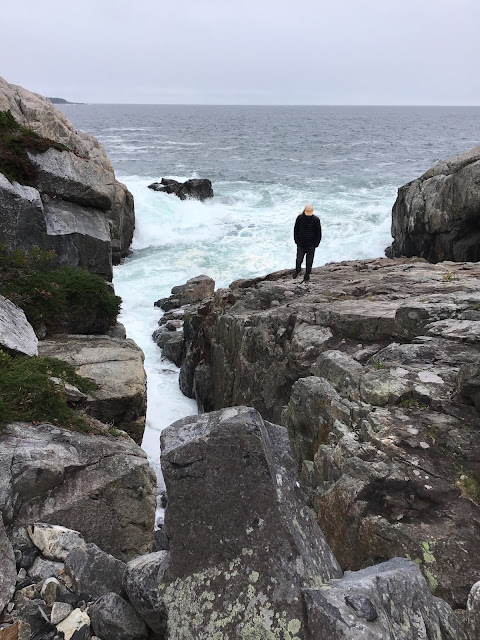 The winds that day, Tuesday, were from the south, and would have made our paddle back to Stonington easier than in the strong north winds predicted for Wednesday. But by the time we arrived back in camp for a late lunch we were tired and didn’t feel like packing-up and paddling. Besides, reservations out at Duck Harbor are hard to come by, and you might as well make the most of them.
We spent one more night and paddled back amid lively seas Wednesday morning, into a powerful headwind: exhausting paddling. It really was a mistake to not head back a day earlier, when the wind was in our favor, but it allowed us another long, leisurely day out there. And now with the hard work behind us, when we’re no longer cold and wet, it’s easy to only remember the more enjoyable parts. 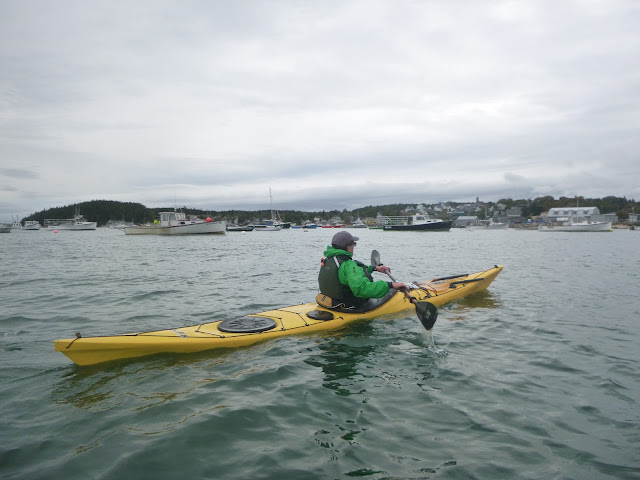 Every time we go out to Western Head, we’re struck by what a different world it is from Deer Isle, and yet so close. Every time we go, we resolve to get out there more often. A few weeks ago we paddled out in the tandem in a little over two hours – maybe that’s one way we can do it. Or we just need to work less and play more.
Notes:
Read more about this route in my book, AMC’s Best Sea Kayaking in New England.
Reservations for Duck Harbor Campground may be made starting on April 1st. I suggest you wait a few days though, until we have our reservation.
Source: seakayakstonington