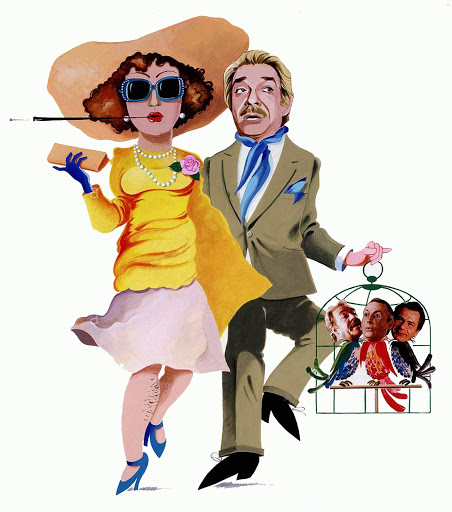 Come and Investigate the Dark Side of Your Soul 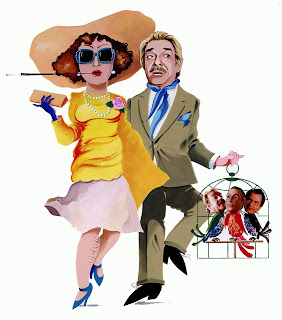 As I wrote in my first blog post about this show, the title La Cage aux Folles can be translated a few different ways, but the one that makes most sense to me is The Cage of Madwomen. And yet, while folles usually means crazy or foolish, it's also a slang word for effeminate gay men. Think about that for a second.

The name of the show -- and the name of the club at the center of our story, and the name of our show's title song about that club -- is all about ambiguity. As Georges quips in Act I, "If you can't be truthful, be vague." The title song itself, the lyric, is about how all the labels and categories are blurred, even erased, in this world.

Because we don't need them. Because the world is more complex than that.

It's the conservative Dindons' worst nightmare: social and cultural complexity. Or maybe we'll find out it's Mme. Dindon's liberation. (Fun fact: dindon is French for turkey.) The content of the show's title song is all about erasing the lines between male and female, moral and immoral, classy and tacky, "royalty" and "riff-raff," "Perrier" and "Canada Dry," etc.

What's the point? Labels are meaningless. People are individuals. People are who they are. Labels can't contain us. So whoever and whatever you are, you're safe here at La Cage. There are no expectations, no assumptions. During one of Georges' interactions with the audience, he says, "Duchess is that you? I didn't recognize you behind the moustache. It brings out your eyes." It's funny on the surface, but it's more than that. It's also about not judging, or maybe even more than that, celebrating what makes us individual.

It's rather gaudy but it's also rather grand;
And while the waiter pads your check, he'll kiss your hand.
The clever gigolos
Romance the wealthy matrons,
At La Cage aux Folles.

So it's gaudy (tasteless) and grand (tasteful). The waiter will steal from you and treat you warmly. And then a mention of rich women and their boy toys, right before we return to the title phrase, which means The Cage of Madwomen.

It's slightly forties, and a little bit new wave.
You may be dancing with a girl who needs a shave.
Where both the riff-raff
And the royalty are patrons,
At La Cage aux Folles.

It's both old-fashioned and up-to-date (remember, the show's set in the 1980s). And gender is ambiguous. And money doesn't mean much. And now we switch from a minor key to major.

This place is both classy -- they have a dashing maitre d' -- and tacky -- the hatcheck girl is flashing her business at passers-by. And the "foreign" is a matter of perspective.

In other words, all bets are off. The usual rules don't apply here. In fact, virtually no rules apply here. Except one -- dignity.

The music returns to minor...

Eccentric couples always punctuate the scene;
A pair of eunuchs and a nun with a marine.
To feel alive, you
Get a limousine to drive you
To La Cage aux Folles.

The tone changes here. It's no longer self-depricatingly ironic. This is a weird place, but it's also a good place, a safe place, an interesting place, a place where you can be fully, unapologetically you. Where you can be alive... with the obvious implication that you're probably not alive anywhere else.

It's bad and beautiful; it's bawdy and bizarre.
I know a duchess who got pregnant at the bar!
Just who is who
And what is what is quite a question
At La Cage aux Folles. 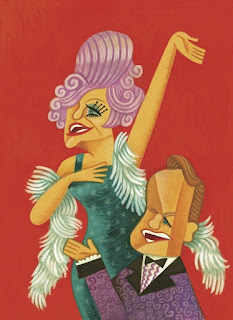 This is a place of freedom and excess. Note that it's bizarre and bawdy, even bad, but it's also beautiful. The pregnant duchess embodies the ethos of this place -- Follow Your Bliss and Discover Your True Self. And don't worry about categories, definitions, norms, proprieties...

Go for the mystery, the magic and the mood;
Avoid the hustlers
And the men's room and the food.
For you get glamour
And romance and indigestion
At La Cage aux Folles.

You get everything! La Cage represents the yin and yang of our lives, in miniature. And as if in celebration of that, the music turns major as more voices join in choral harmony.

That last image is so subversive. Someone left a designer gown in the restroom. It instantly conjures questions -- was it a man or woman? what were they wearing when they left? who leaves their dress in the bathroom? But all those questions tell us everything we need to know about this place. We can't impose the rules of the outside world on the people and behavior in this world. As evidenced by the next, delicious lines...

You go alone to have the evening of your life;
You meet your mistress and your boyfriend and your wife!
It's a bonanza,
It's a mad extravaganza,
At La Cage aux Folles!

Then there's a big dance break and the Cagelles dazzle us. Eventually, Albin returns... and the music returns to minor...

You'll be so dazzled by the ambiance you're in,
You'll never notice that there's water in the gin.
Come for a drink and you may
Wanna spend the winter
At La Cage aux Folles!

Sounds like fun, no? The music turns to major one more time. 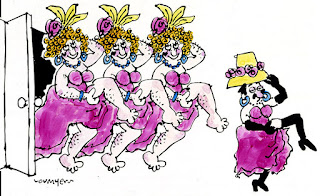 The Cagelles return for a can-can, the once notorious dance originally performed at the Moulin Rouge in Paris, a fitting tribute to the dancing girls that came before them. After the rowdy, carnal dance break, Albin returns and he brings the minor key -- and complexity -- back with him.

Come and allow yourself to lose your self control;
Come and investigate the dark side of your soul.
Come for a glimpse and you may
Wanna stay forever
At La Cage aux Folles!

You cross the threshold and your bridges have been burned.
The bar is cheering for the duchess has returned!
The mood's contagious;
You can bring your whole outrageous entourage!
It's hot and hectic,
Effervescent and eclectic,
At La Cage aux Folles!

Who wouldn't want to go to a place like that? We're in Shakespeare's Woods. We're through Alice's looking glass. And we're here to learn something about ourselves.

Songwriter Jerry Herman's subtle but powerful trick of switching back and forth between major and minor is really clever. The minor key gives us that sense of the dark side, the wildness, and the major key delivers the joy and playfulness. Like the rest of the show, it's ambiguous. It's the musical yin and yang of La Cage aux Folles and La Cage aux Folles, and it connects this title song to the major textual themes of the show.
In most of Jerry Herman theatre scores, he uses minor keys not to express sadness, but complexity. Look at "Ribbons Down My Back" in Hello, Dolly! and much of the score to Mack and Mabel.

He does the same thing in La Cage's "Song on the Sand," which also alternates major and minor, but for a slightly different reason. Here, the intro and first verse are about an only partly remembered past, but in the second verse when Georges switches to the present, the music moves to major. But before it ends, it moves back to the past and back to minor. The past is bitter-sweet, but the present is good. Relationships are hard, but this is a strong relationship genuinely built on love. 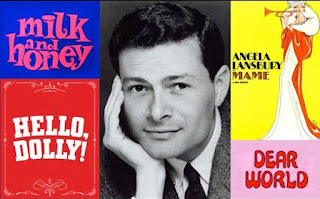 We think of songwriter Jerry Herman as one of the shining lights at the end of the so-called "Golden Age" of musical theatre, and we lump him in with other writers of lightweight fare. But Herman didn't write fluff. Even his earlier works, Hello, Dolly! and Mame featured decidedly subversive, nonconforming women, whose nonconformity up-ends everyone and everything around them.

Many stories have an "agent of chaos" who bring disruption to a story. But it's not usually the protagonist. Isn't it interesting that Herman's leading women are always the agents of chaos in their own stories? Merely the desire to control their own lives and destinies is disruptive to the men around them. Maybe that's why gay men like to read Dolly and Mame as subliminal drag queens.

And after all, isn't that essentially the story of La Cage aux Folles? Albin causes chaos by being who he is, and refusing to apologize for that. And isn't that exactly the kind of disruption at the heart of progressive political activism in America right now?

We open this week! Get your tickets!

Come and Investigate the Dark Side of Your Soul