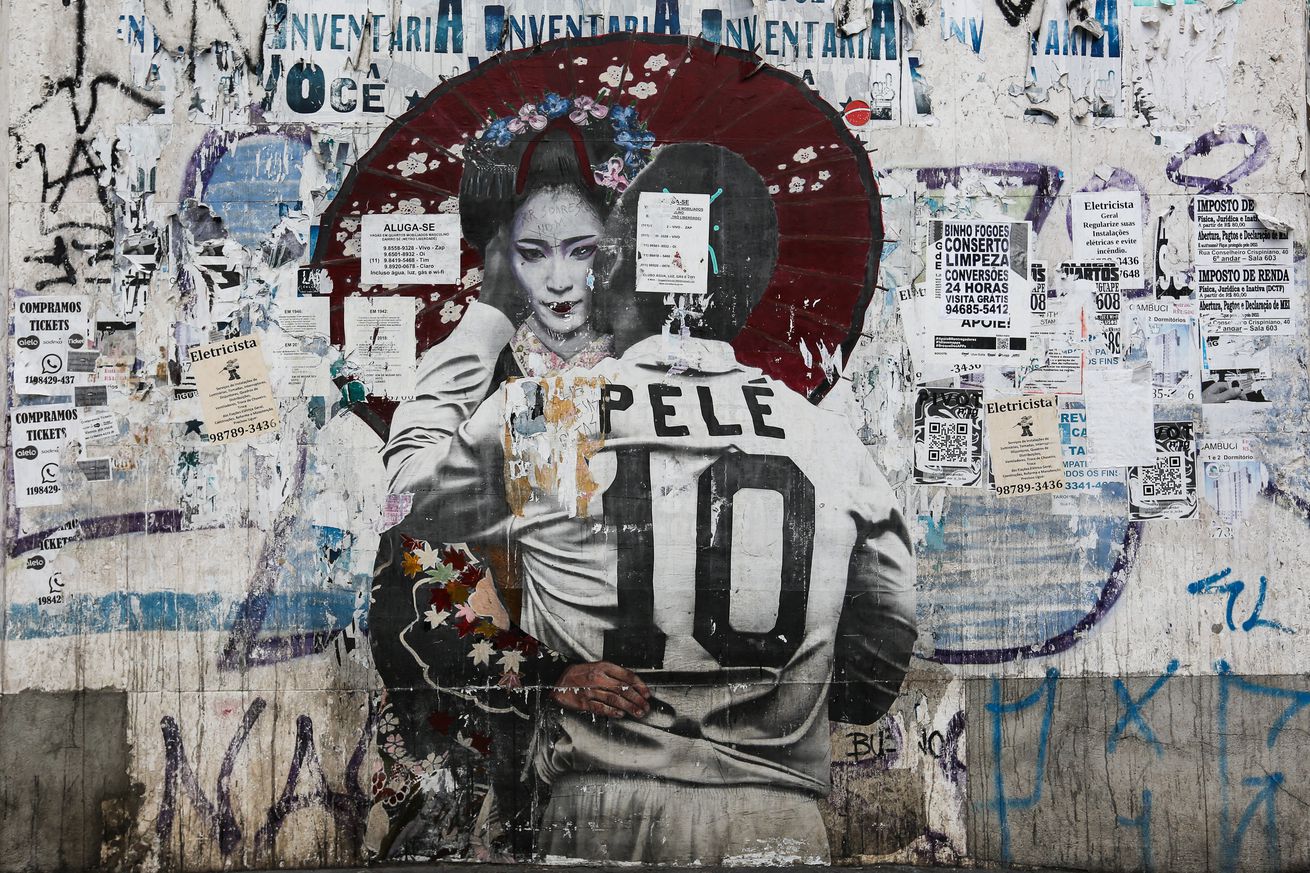 Celebrating the 80th birthday of Pelé and his lasting impact on soccer in the U.S.

If you were writing a biography about a soccer player for school as a kid, it was probably about Pelé

Pelé is the most recognizable name in soccer and one of the greatest, if not the greatest to ever play the game, and for decades he was the subject for every young American soccer players’ school biography project, myself included.

The “King of Soccer” celebrates his 80th birthday today from his home in Brazil. Yesterday, in a media message for his fans, he said, “I hope that, when I go to heaven, may God welcome me the same way that I am welcomed because of our cherished football.”

Pelé grew up in Bauru, in the state of São Paulo, learning the game from his father, Dondinho, who played professionally for the local club until he was forced to retire due to injury. The stories I still remember as a kid while researching Pelé were of him playing with soccer balls made from rags and socks because his family was too poor to buy one, then of him hanging out by the stadium with his friends, waiting for a ball to come over the walls. And when one did, he kicked it as far as possible until he could bring it home for his team, the Seventh of September, named after Brazil’s Independence Day.

When Pelé signed with Santos at age 15 in 1956, he scored in his first professional game, a 7-1 win against Corinthians Santo Andre. The following season, he led the Paulista with 17 goals and was the league’s leading scorer again for the next eight seasons. He won his first Paulista in 1958 and made his World Cup debut later that year, the youngest ever at that time, scoring a hat-trick in the semifinals against France and a brace in the 5-2 win over Sweden in the final.

What followed was an incredible career with numerous trophies that included 3 World Cups, the most by any player, 6 Brasilerãos, back-to-back Copa Libertadores in 1962 and 1963 in which Santos also won the Intercontinental Cup, defeating Benfica and A.C. Milan respectively, and 10 Paulistas. Pelé is the leading scorer in Santos history as well as for the Brazilian National Team, and his 1,281 career goals are the most among any professional player although it’s been debated that many came from the numerous friendlies he played as an ambassador for the game. In 2000, FIFA named Pelé the Footballer of the Century along with Diego Maradona. Pelé topped the FIFA officials, coaches, and journalists poll while Maradona captured the fans internet poll, which may be skewed considering a majority of the people who grew up watching Pelé were not yet using the internet.

The Philadelphia Union’s Ilsinho also grew up in the São Paulo state, learning to play soccer on neighborhood streets with his friends, on Futsal courts, and in the Palmeiras academy before making his senior debut in 2006. That same season, he moved to São Paulo and won the Brasilerão title and was also named a Bola de Prata winner by Placar Magazine, the Brasilerão’s version of the Best XI. Pelé won the first Bola de Ouro in 1970.

Ilsinho spoke about the influence of Pele on his upbringing, “Since I was born, everybody talked about him,” he said. “We saw a lot of videos from the World Cup. When your Dad came home from work to talk about soccer, he talked about him.”

Ilsinho said some differences between growing up in Brazil versus America come from opportunity, where the kids here have other sports like American football and basketball to follow. “In Brazil, every kid wants to be a soccer player, and every player wanted to be Pelé, Zico, or Romario.”

Ricardo Villar is the CEO of the Florida Cup, one of the largest soccer and entertainment events in the U.S. For the past six years, the biggest clubs from Brazil, South America, and Europe have come to Orlando during pre-season or winter break to train and play high-level games. Villar is also a Penn State All-American from São Paulo who played for years in Austria and Germany before finishing his career in MLS with FC Dallas.

“My generation did not see him play,” he said. “We only heard stories about how incredible he was. My father and uncle used to tell me how he destroyed the league, but his teams also won everything.”

Villar was always impressed by the way Pelé carried himself during the years after his career, as most of us today know him. “His leadership went beyond the single, natural talent. He was the number one role model as an athlete, always striving to be the best he can be, and giving back.”

Villar, too, grew up watching videos of Pelé and dismisses any talk of Pelé playing against inferior players. Pelé played against the likes of Beckenbauer and Bobby Moore, and was often the recipient of brutish hacking tactics. “Some people say that defenses then were bad? He dominated the game in his generation, his time. We could say the same about Messi and Ronaldo in twenty years.”

For Brazilian-American players like Villar who have a modern American sports perspective, he compared Pelé’s mental fortitude to that of Michael Jordan or Roger Federer. “In South America, opposing fans would keep you up in your hotel, try to give you bad food, and he won at a time when everyone was trying to hurt him. If anything, he was ahead of his time.”

Pelé made his greatest contribution to U.S. Soccer in the mid-1970s when he came out of retirement to sign a $4.7 million contract with Warner Communications to play for the New York Cosmos in the NASL, which at the time included young European journeymen and college All-Stars grinding away to earn a few thousand bucks. One of those players was Joey Fink, who later played for the Philadelphia Fever in the MISL from 1978 to 1981. Fink scored 51 goals in his final season with the Fever before moving to the Baltimore Blast, where he became one of the top scorers in the history of the league.

Fink was drafted by the Cosmos in 1973 after an All-American senior year at New York University in which he scored 18 goals. He scored 11 goals in his first season before an injury setback and extra job commitments limited his appearances the second season. “The year before Pelé arrived,” he said, “we played on the Fourth of July at Randall’s Island,” Now known as the Icahn Stadium after its renovation in 2005, Randall’s was a crumbling horseshoe style built in the mid-thirties during the construction of the Triborough Bridge.

“It was ninety degrees at two or three in the afternoon,” Fink said. “Only die-hards and family members were there. We could count them up the rows and stopped at 200. The next year (June 15, 1975), the same stadium was sold out with 22,500 fans and another one to two thousand watching from the bridge that connected to the island.”

There’s a popular story of the groundskeeper spray-painting the grass green for the live CBS broadcast, the first NASL game on a U.S. network in six years. “He was followed by international press, and the crowds were five-to-ten times higher in Seattle, San Jose, all the big cities.”

Pelé had a body guard, a PR person, and always had by his side Júlio Mazzei, a Brazilian coach who was an assistant with the Cosmos before eventually taking over in 1979.

“They tried to make it more like a family, took more effort to make him feel welcome. We had about twelve to fifteen different nationalities and not all of us spoke the same languages. He was always in control, had incredible balance. He’d point out directions, and I tried my best to do whatever he told me to do.”

By Pelé’s second year the Cosmos moved back to Yankee Stadium, and in his third year, they were filling Giants Stadium as the team added Georgio Chinaglia and Beckenbauer, who led them to the Soccer Bowl title over the Seattle Sounders. Pelé’s final professional game for the Cosmos came against Santos, where he played a half for each team on a rainy day in front of 76,646 fans, among them Muhammad Ali, who sat in a box beside Dondinho.

I only remember the grainy videos of Pelé juggling mangoes and leading a Brazilian Fun Run during a training session, complete with tires, sprints, and headers on a ball dangling from a string above players’ heads. I’ve watched the endless looping YouTube videos of goals, nutmegs, and moments in which he made opponents appear as if they were fighting a superhero. He appeared with dignitaries, world leaders, celebrities, and was the single greatest promotor of the game worldwide, but especially in the U.S.

Pelé had been retired for several years by the time he portrayed captured Allied soldier Corporal Luis Fernandez in John Huston’s World War II drama Victory. After watching Pelé score the tying goal against the Nazis with his famous bicycle kick, I practiced for months in my backyard until I could make contact and get the ball somewhere near a goal. Perhaps the next- best scene in the movie is when Pelé takes the chalk from Michael Caine’s hands during a board session and draws a winding path around the X defenders saying, “After you give me the ball, I do this, this, this, this, this, this, this, goal. Easy.”

For Pelé, it may not have been that easy, but at times, the game’s greatest player certainly made it look that way.

Celebrating the 80th birthday of Pelé and his lasting impact on soccer in the U.S.