The number one question I have about this whiskey is how much would the Woodford Reserve Baccarat Edition be if it was instead named the Woodford Reserve XO Edition? If the handmade crystal decanter, made in Baccarat, France, was removed from the equation what kind of a price would we be looking at? $200 – $400 like the other Master’s Collection whiskeys?

After all, isn’t that what this really is? A Master’s Collection experiment / limited release like the Sonoma-Curter or Oat Grain whiskies just put into a much, much, MUCH, fancier bottle? Seems so. But, hey, you can’t really blame a brand for pushing the boundaries of the market and seeing what it can bear. At least the bottle looks stunning… though what about the whiskey inside?

After all, the most important part of a bottle of whiskey is the actual whiskey. So, let’s get to drinkin’ and find out where this falls.

NOSE
Dense dried dark fruit, musty-funky-grapey almost rum-like notes, brown sugar, toffee, oak, vanilla custard, candied citrus and bits of baking spice. It would be easy to tell someone this was a rum just from the smell, there is such a weird funky note to I immediately thought of the Foursquare 2013 Habitation Velier.

PALATE
Sticky dark fruit, oak, vanilla custard, candied citrus, herbal spice, chocolate licorice, charred nuts and a touch of musty funk. This is a dark, and slightly funky, fruity bourbon profile. While the nose might fool some folks, the palate of the Woodford Reserve Baccarat Edition, likely, would not… unless they’re a Whiskey Somm, it would probably fool them.

The port notes initially cover up the bourbon and even give it moments of resembling a young Barbados rum. Though all of that shifts after it breathes and the bourbon notes start to emerge more fully. However, they seem to never really, fully, arrive and the cognac sweetness hangs rather heavy.

This is an interesting experiment, but I’m not sure cognac and Woodford are really the best match. As far as bourbons go, Woodford is already on the lighter, fruitier, side of the spectrum and when it’s finished in something as heavy as cognac for three years you lose all but a hint of that core Woodford profile.

It’s not a bad whiskey by any means, I’m enjoying it just fine, but I’d have a hard time guessing this Woodford Reserve Baccarat comes from Woodford. If anything, I’d probably guess it was something like a proofed-down Phifer Pavitt release from Bardstown.

*Disclosure: The sample for this whiskey review was graciously sent to me by the company without obligation. The views, opinions, and tasting notes are 100% my own. 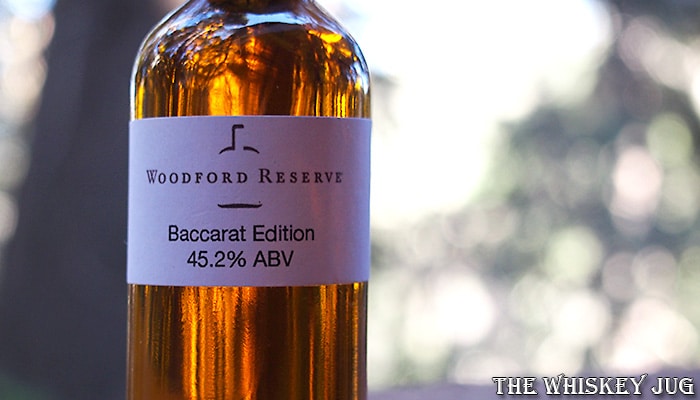 A super fruity, slightly oily, weirdly interesting, release from Woodford. I don’t think it’s a runaway success, but I love seeing them trying something new.