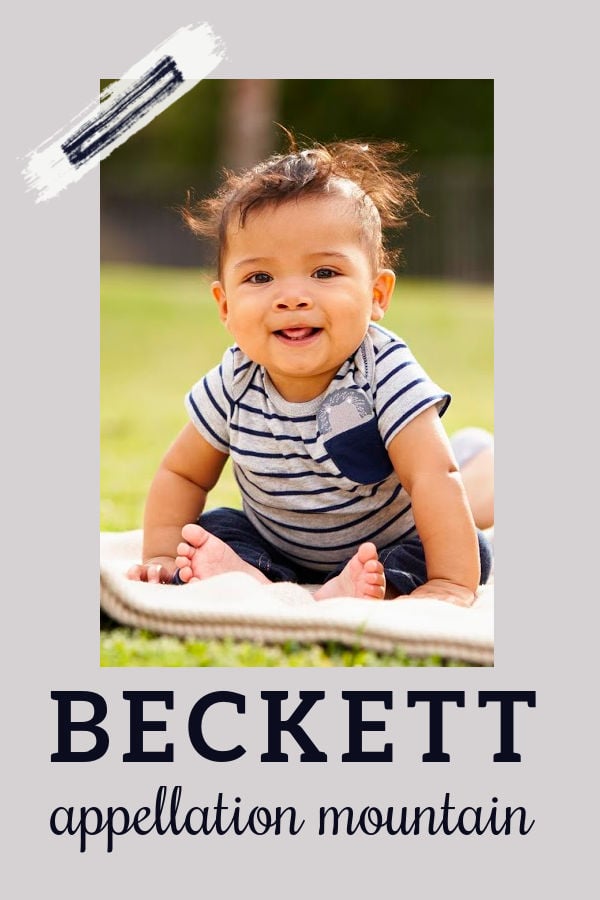 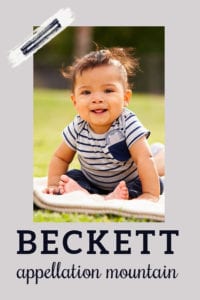 Thanks to September for suggesting our Baby Name of the Day.

It fit right in with established names like Garrett, as well as fast-rising newcomers, including Benett, Everett, Emmett, and the similar Wyatt and Elliot/Elliott.

When it comes to meaning, Beckett is most often a place name.

It’s found on the map in England, where “beck” refers to a stream. Or possibly, it comes from a phrase meaning “bee” and “cottage.”

Or perhaps it’s not a place name at all. In Middle English, beke meant beak. The French word was bec. It’s possible that Beckett referred to someone with a prominent nose.

It’s been around for ages, though, and other origins and meanings are possible.

The notables bearers of the surname Beckett really color the name’s image.

First up: Archbishop Thomas à Becket, who served in the twelfth century under King Henry II of England. Incidentally, in his lifetime, he was plain old Thomas Becket. The ‘à’ was added centuries later.

In any case, Becket went toe-to-toe with the king over the rights of the monarch to exercise authority over the church. After much drama, they had reached a compromise, and Becket returned from exile in France.

But just as they patched things up, Becket set Henry II off again. And the king muttered something like this: Will no one rid us of this pesky priest?

The king’s loyal followers took it as an order, and off they went to kill the archbishop.

Within two years, Thomas had been canonized, adding him to a long list of saints named Thomas.

Fast-forward to the twentieth century and there’s Nobel Prize-winning author Samuel Beckett, a native of Dublin, Ireland, famous for his play Waiting for Godot.

Along with Edward Albee, Tom Stoppard, Eugene Ionesco, Jean Genet, and a number of others, Beckett’s works are usually considered “Theater of the Absurd” – plays where the characters fail to find meaning or reach a defined goal. They’re not exactly bedtime stories.

But it does lend the baby name Beckett quite a bit of literary cachet. The writer was a major force in twentieth century literature. Beyond his accomplishments on the page, he also earned the recognition of the French government for his work in the resistance during World War II, with a Croix de Guerre. The award recognizes bravery in combat.

On a far lighter note, over the last few decades, pop culture has made the baby name Beckett familiar through frequent use as a first and last name.

Overall, the baby name Beckett benefits from its most famous bearers. It sounds principled, intelligent, creative, and bold. And while it’s undeniably stylish now, with the -ett ending, it sounds like a name that will stand the test of time.

Since debuting in the US Top 1000 in 2006, the has climbed to #215 as of 2019. That’s still relatively uncommon. If you’re after something modern, but with roots; familiar, but slightly unexpected, then the baby name Beckett could be exactly right.

Would you consider the baby name Beckett for a son?

First published on December 2, 2011, this post was revised substantially republished on October 28, 2020.