Maldon is a small town found in Victoria’s Goldfields region. It was named Australia’s First Notable Town in 1966, due to its authentic appearance – it’s been almost perfectly preserved since the goldrush era of the 1850’s. Find out why you should visit Maldon Victoria and spend some time drooling over the photos of this gorgeous and certainly most notable town.

As a state, Victoria has been quite good at preserving its architectural history.

Melbourne wasn’t entirely immune from the destruction and demolition that swept Australia in the 1960s, but there are still some pretty amazing old, heritage buildings that remain in the city.

One such town is that of Maldon, which is under two hours away from Melbourne.

Its heritage is so well preserved, that it’s known as Australia’s ‘First Notable Town’, a title bestowed upon it by none other than the National Trust.

Read on to find out more about Maldon, what makes it notable and why you should visit.

Disclosure: This page may contain affiliate links. Clicking through for additional information or to make a purchase may result in a small commission. Please see my privacy policy if you require more information. Thank you.

I love ghost signs, of which Maldon has plenty.

What makes this town “notable”?

First of all – what on earth is a notable town?! What is it about Maldon that makes it so worthy of… notation?!

This classification is handed down by none other than the National Trust, and it was bestowed upon Maldon Victoria in 1966.

You see, its been perfectly preserved since its mining days. There’s a ton of historic buildings, such as the railway station (1884), old post office (1870) and the Grand Hotel (1888).

A sign for very much defunct company Rego, recently restored and found on the side of an old bakery.

The historic buildings haven’t been left to rot, either. They’ve been converted into galleries, cafés, restaurants and in particular, antique shops.

So you can wander along a streetscape that looks like it hasn’t changed in over 100 years (try to ignore the very modern looking cars parked alongside the road and driving on through) and have a good shop while you do it.

Maldon is around an hour and forty minute drive from the state capital, making it an ideal day trip from Melbourne. Hell, you can even make a weekend out of it, if you so wish.

Peter’s ice cream – the ‘health food’ of a nation. Sure.

Before being colonised by European invaders, this region of central Victoria was home to the Liarga Balug, a clan of the Jarra People of the Dja Dja Wurrung language group.

In the late 1830s and 1840, Europeans arrived and took over, stealing the land from its traditional owners, to use for their own agricultural purposes. 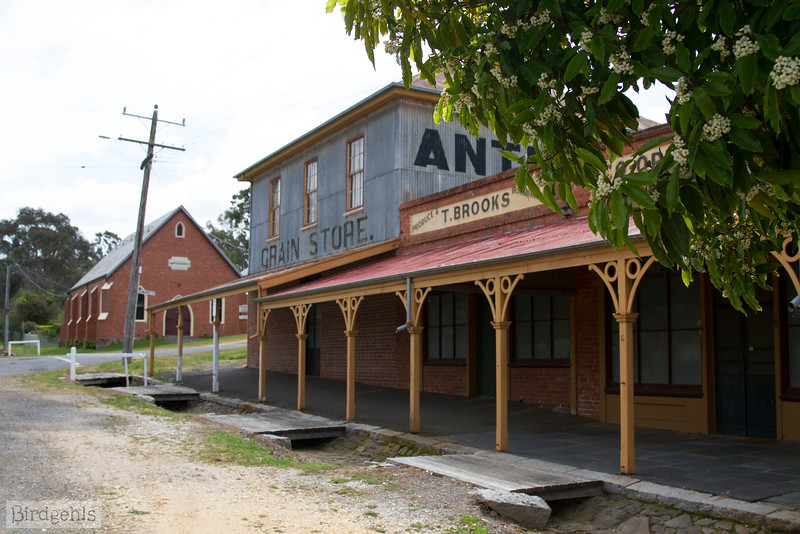 Then, gold was found in the 1850s and everything changed.

The diggers arrived in their thousands and the township of Maldon quickly sprung up, to sustain them. The town itself became a municipality in 1858.

The service station attendant came out to pump our petrol for us, which felt delightfully old school.

Things began to slowly die down in terms of gold rush activity in the 1870s, however agriculture kicked on, becoming the main economic activity.

Some continued to find wealth in gold, with the last of the early mines closing in 1926.

After this, the town began to decline, not helped by the Great Depression. However, things began coming up Milhouse in Maldon once more in the 1940s, when the population began to rise.

And if you love tearooms.

It was in the 1960s that Maldon took a turn for the best. With its historic buildings and streetscapes rediscovered, it was declared ‘Notable’ by the National Trust.

Since then, it’s been the scene of extensive restoration and conservation.

If you’d like to learn more about the town’s history, consider visiting the local museum.

Lan-choo, along with Bushells, was one of the first tea companies in Australia.

Maldon Victoria is worth visiting today, for several reasons.

The first is that it is essentially a time capsule for gold rush era Victoria, an important part of the state’s history.

It’s pretty amazing to wander down the streets and see the old shopfronts, some featuring brightly restored ads and signs from a bygone era.

It’s also an incredibly fun place to shop, if you love boutiques and antiques.

If you’re all for supporting small businesses and spreading the tourist dollar, consider picking up some needed homewares (or not needed – no judgement here).

I particularly enjoy the Maldon General Store Much Ado, which sold a lot of environmentally friendly items, for which I am a sucker.

Maldon has a range of places to stay. If you want to tie in with the old, timey-wimey feeling, opt for a self-contained cottage or traditional B&B. Search for accommodation in Maldon here.
Alternatively, you can stay in Bendigo or Castlemaine and visit Maldon on a day trip from either town. 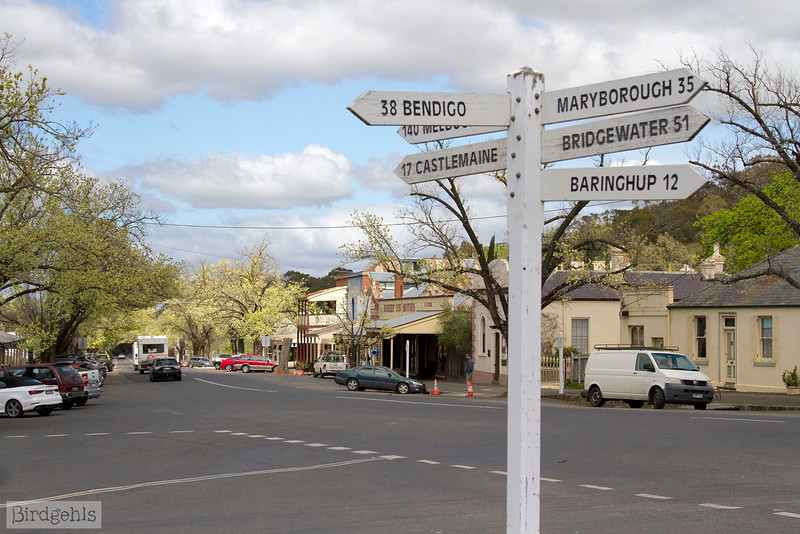 There’s plenty to see nearby.

Maldon is near two big regional towns – Bendigo and Castlemaine. If you’re visiting either town and fancy popping into Maldon for a few hours, this is entirely doable.

It’s also around a forty minute drive from Victoria’s spa region of Daylesford and Hepburn Springs. This drive is particularly beautiful mid-spring, when all the wildflowers are out!

Another really picturesque town to explore nearby is Clunes. It’s Australia’s first Book Town and holds an annual book festival every May, a must-do for bibliophiles.

Maldon, Victoria is certainly worth visiting, even if you just spend an hour wandering around its historic streets.

Other posts on Victoria

Pin me baby, one more time. 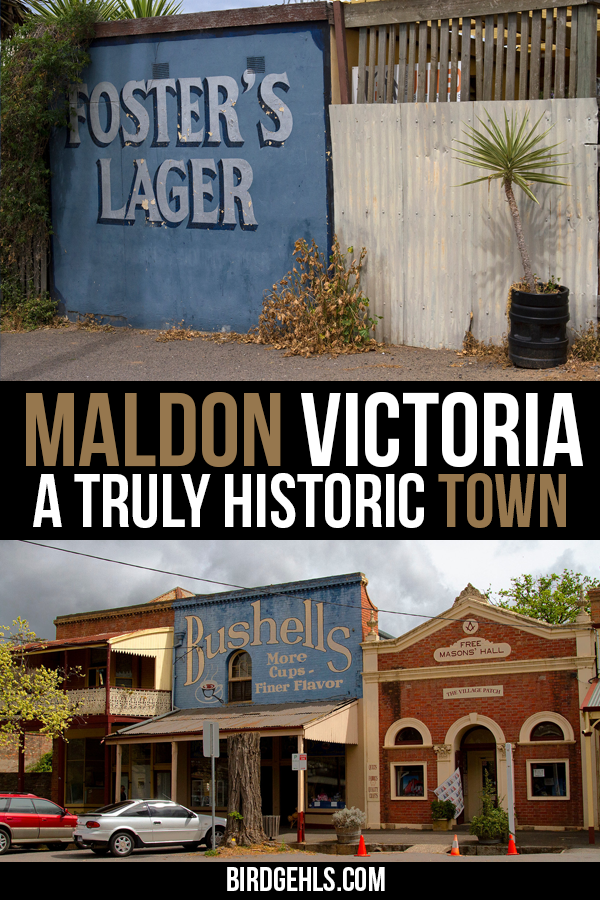