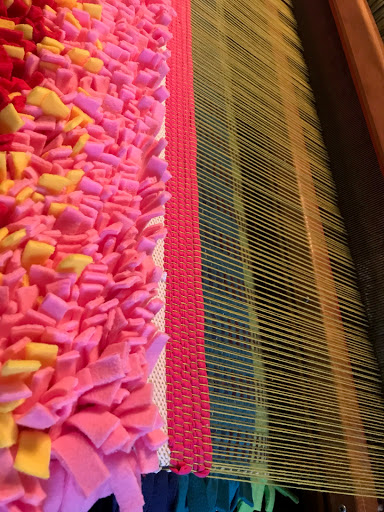 Big Present for a Big Day

I looked back over the blog posts to see when I had started to weave the shag rug, turns out it was the day after Christmas.  If I remember correctly, I wove through one color repeat and decided that I wanted to add another color to the rug.  It was about that time that I decided to cut all of the poly fleece into 4 in strips at about 1/2 inch width.  (That took some time and a dust mask!)  Once I had cut all of the fleece I had already purchased, I began to weave again.  I realized part way through the second color repeat that I would have to buy some more fleece, but I only stripped half of the new purchase, I thought it would probably be enough, and it was. 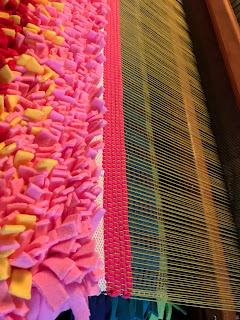 I'm not sure how it happened, but the project that I thought would never end, did!  Don't get me wrong, I thoroughly enjoyed it, but I had never woven something quite this massive.   It was a project which I was able to do many things new:

First full width project on Big Bertha
First Shag rug
First time working with polar fleece (so squishy in this context)
First time tying up direct tie up treadles on both ends of the rack of treadles, which worked perfectly by the way

Anyway the day came when I had finished the last color repeat, I wove the 16 picks of peaches and cream tabby ground, and I was ready to cut and tie the warp strings. 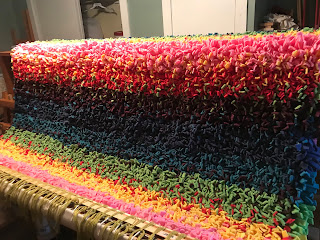 Once I had the first end secured I had to throw the rug over the loom and do the same thing for the beginning of the rug.  I like how the rug completely covers the loom. 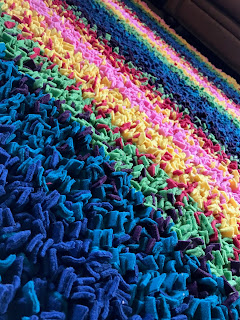 I let the rug rest overnight and then I turned the hem under twice and stitched it to the underside of the rug to hide it all.  I finished it Monday night, so I was able to bring it to show and tell Tuesday at the Center.

Wednesday morning I got the call that the Birthday girls mom wanted to surprise her with the rug in place when she got home from her birthday party at the local "jump" house.  So I packed the rug up and took it over. 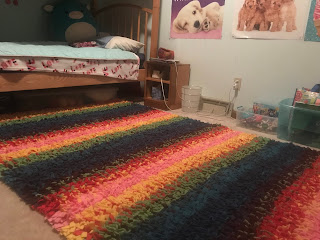 The rug fits perfectly into the space she wanted to fill.  It is soft and squishy and so colorful!  I heard later that there were squeals of delight and that the birthday party pretty much camped out on the rug all afternoon!


This was a project seemed too big for me to complete, but 4 inch section by 4 inch section, week by week, I managed to get it woven.  It wasn't supposed to be a birthday present at all, but when I remembered that her birthday was only 3 weeks away,  and the rug was so close to being finished it gave me a deadline to work towards.

Now on to the next project, Happy Weaving, Tina

Big Present for a Big Day