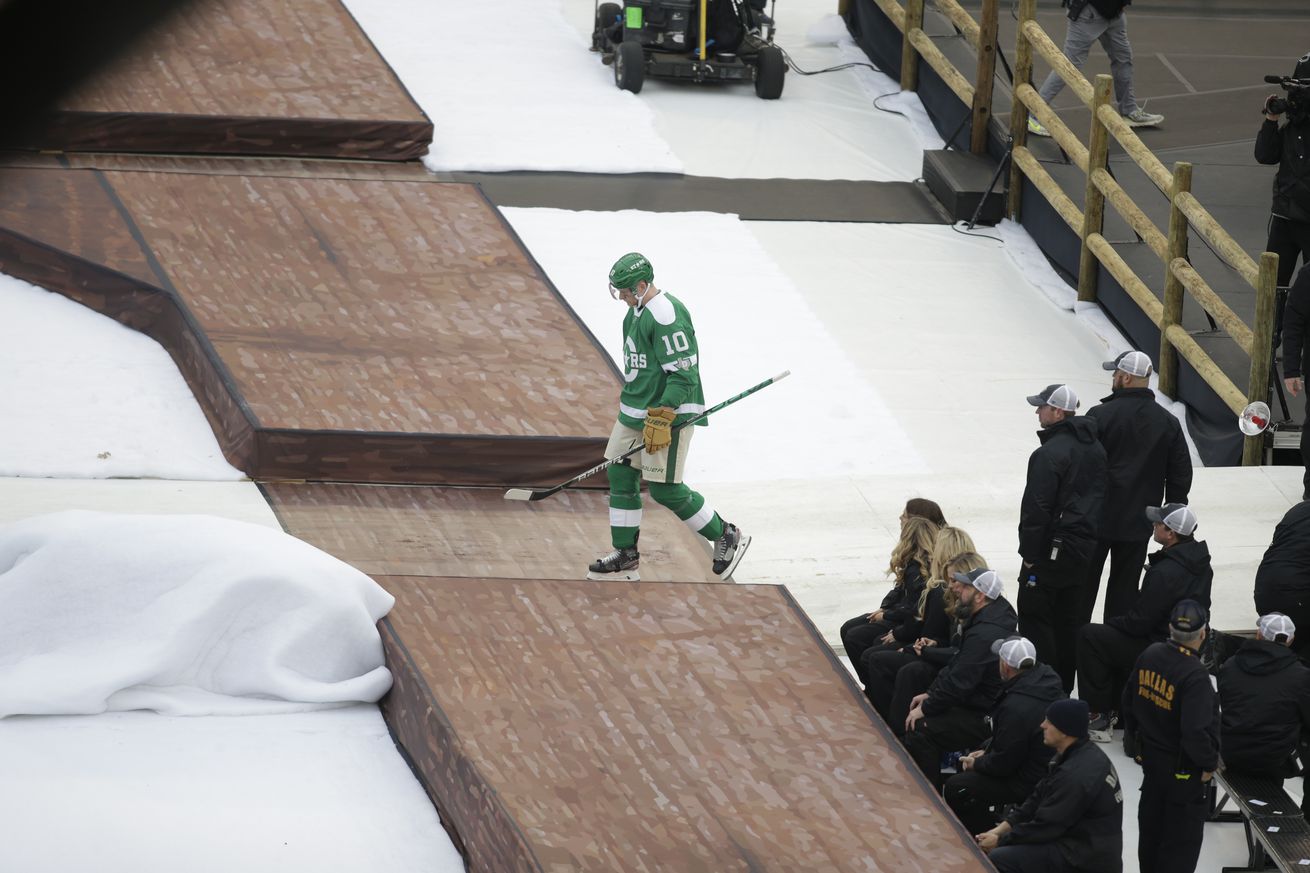 Lightning Round: Why fining John Tortorella helps no one and Corey Perry’s Walk of Shame

DALLAS, TX - JANUARY 1: Corey Perry #10 of the Dallas Stars walks back to the locker room after drawing a five-minute major during the 2020 NHL Winter Classic between the Nashville Predators and the Dallas Stars at The Cotton Bowl on January 1, 2020 in Dallas, Texas. | Photo by Tim Heitman/NHLI via Getty Images

So Green Day, a pair of clown shoes, and the penalty song from the World juniors walk out of a football stadium...

Three days after calling out mistakes made by officials in the Columbus Blue Jackets 3-2 SO loss to the Chicago Blackhawks, John Tortorella has been fined $20,000 by the NHL. On top of that, he has been given an additional fine of $25,000 if he makes “similar inappropriate” comments again.

Colin Campbell, the NHL’s Director of Player Operations, has been at the center of all this aftermath. First, he released the following statement that reads like an eighth grader trying to hit the word count on their essay. Then, we became aware through the media that he will be lobbying Commissioner Gary Bettman to implement a fine on Tortorella for his comments.

#NHL director of hockey operations Colin Campbell tells The Athletic that #CBJ coach John Tortorella's post-game comments were “unprofessional along with unacceptable.”
Campbell has spoken with Tortorella and CBJ GM Jarmo Kekalainen and says the league is “dealing with it."

Per Colin Campbell, NHL director of hockey ops, a lengthy explanation about why time wasn't added back on the clock after the #Blackhawks too many men penalty in OT last night plus a chastising statement about Tortorella's postgame comments -> pic.twitter.com/UAB49TxgM2

#NHL director of hockey operations Colin Campbell will meet with commissioner Gary Bettman at Winter Classic to further discuss a possible fine for #CBJ coach John Tortorella in the wake of his post-game comments on Sunday.

My take this is that it all looks very childish from Campbell and the league. Fining Tortorella was not off the standard at all, lots of coaches have been fined in the past. What did it for me was the Director of Hockey Ops seemingly taking it so personally. The statement he wrote carried incorrect grammar and read very unprofessionally. Then to go lobby the commissioner at the Winter Classic? And then to spend three days on a decision? That’s a lot.

Another thing I don’t like about this is the league’s insistence that they were in the right, despite the evidence against it. You can read in my first Lightning Round on the matter that I think the league and officials should have to talk to the media after games and release detailed explanations (and even recordings) on controversial calls after the games. Other North American leagues, namely the NBA, do this. Why not the NHL?

This past decade — heck two decades dating back to the toe in the crease — have been awful for officiating. No one knows the rules anymore and everything is so subjective and left in the referee’s “judgement” that there is no consistency. When the NHL implemented video review, they dipped their toe in the water of getting the calls right. They tried to band-aid a solution (offsides) by looking at the symptoms rather than the causes.

I bet if you polled North American sports fans and gave them a driver’s test-type quiz, hockey fans would know the least about the rules of the game and we would probably all fail. We do not know the rules of our game because the league does not share the who, what, when, where, why, and how. Nothing is consistent.

Dear NHL,
Admit your flaws, take it on the chin, and make your game easier to understand because all the color is gone from my hair and my forehead is starting to look like a young Ryan Getzlaf.
Sincerely,
Hardev

Awesome entrance by the Dallas Stars, who went as a team to Lucchese on Dec. 12 to get done up. pic.twitter.com/4csHdPbVY6

So for my dream Battle of Flori winter classic, should we make them all wear bathing suits for media spots? https://t.co/vqPaSKUMq8

Corey Perry's walk of shame but his footsteps are Squidward's pic.twitter.com/CY5BQAYWzt

The Corey Perry walk of shame but I added 500 miles by the Proclaimers pic.twitter.com/2WEqbBjwpU

Corey Perry’s walk of shame, but I added the penalty song from The World Juniors pic.twitter.com/NwRj0QPEFM

Lightning Round: Why fining John Tortorella helps no one and Corey Perry’s Walk of Shame