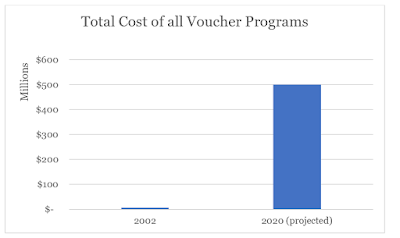 Now that we're in the midst of a pretty contentious debate about the future of Ohio's school voucher program, I thought I would take a minute to address some of the misinformation I've seen online and on social media about this topic. Again, I am not in any way trying to attack anyone individually. I have just noticed several pieces of misinformation that folks seem unwilling to address or correct. So I thought I'd set the record straight.

What about the Kids in Limbo?
Lots has been made of the parents and students who were told this year that they were eligible for vouchers and now they may not be, depending on what the legislature does. In fact, they sued the state over this issue. Look, I feel for these parents. But for too long, state lawmakers have been obsessed with ensuring that the needs of the 10-12 percent of parents and students who excerise private or charter school options are met, while all but ignoring the fact that for 30 years now we've had an indequately funded system for the 90 percent of kids who are in public schools. The impact of these choice programs on kids whose parents choose to keep their kids in the public schools is not even an afterthought in a lot of these discussions. I have been encouraged that state Rep. Jones, who chairs the conference committee that held hearings into solutions for EdChoice, actually brought up this issue during hearings (which was a welcome change). But I would urge all involved to recognize that it's not just kids and parents of voucher recipients who are in the lurch -- parents of 1.6 million public school students have been in a 30-year-long lurch that has forced them to constantly raise their local property taxes to pay for the state's inability to effectively address their kids' needs.

Vouchers Save Districts Money
This is a major piece of misinformation, so let me deal with this in parts. First, according to the Ohio Legislative Service Commission, the average EdChoice voucher cost $4,922 in per pupil state funding last year. The average public school student received $3,583. That's a roughly $1,300 difference in state aid for the same student, depending on whether they took a voucher to go to a private school or not. What does this mean? It means for every voucher taken, on average, the district that lost that state funding will have to make up for the lost revenue with local property tax revenue -- last year it was about $30 million in local revenue just to make up for the state funding lost to EdChoice. Remember that the Ohio Supreme Court ruled 4 times that relying too much on property taxes to pay for schools was unconstitutional. The EdChoice voucher program forces school districts to rely even more on property taxes to fund the students who don't take the vouchers.

This isn't the Districts' Money; It's the Kids' Money
No. It's the taxpayers' money. Being used to subsidize private school tuition. This talking point is well worn, but it is wholly inaccurate and misleading. All this voucher money is moving all taxpayers' money into private schools. That's the program. It's no single child or parent's money. It's all our money.

Vouchers have been Ruled Constitutional by the U.S. Supreme Court
While technically true, the system that Chief Justice William Rhenquist examined in 2002 bears no resemblance to the system currently in place. In 2002, there was one program costing $7.5 million, went to 4,523 students for a per pupil cost of $1,721, affected 1 of 613 school districts (Cleveland) and 129 of 3,796 public school buildings, or 3.4 percent of all Ohio school buildings.

If the current system is kept in place for next year, the cost for the state's now five voucher programs could reach $500 million, would go to more than 50,000 students at an average cost of about $6,800 per pupil overall, and about $5,000 per pupil for EdChoice, affect more than 85 percent of all school districts and 1,227 of Ohio's now 3,389 public school buildings, or 36 percent of all Ohio school buildings -- more than 10 times the building rate of 2002. 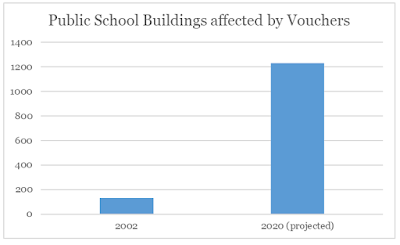 "[a]ny objective observer familiar with the full history and context of the Ohio program would reasonably view it as one aspect of a broader undertaking to assist poor children in failed schools … [t]he program here in fact creates financial disincentives for religious schools, with private, religious schools receiving only half the government assistance given to community schools and one-third the assistance given to magnet schools."

The statewide voucher program is nothing, I repeat, nothing like the one Rhenquist examined. The high school EdChoice voucher alone is $6,000 per pupil. The base aid amount for a public high school student is $6,020 per pupil. Where is that "financial disincentive" Rhenquist mentioned in his opinion again?

Money Should Follow the Student
While a nice talking point, this phrase is practically meaningless. Why do I say this? Because it is impossible to figure out how much money should follow each student to each school. The way money "follows the child" today is the amount of money it is estimated it should cost to pay for a student taking a voucher or attending a charter school is based on an arbitrary amount (voucher) or what the formula says a student schould cost in the district the student attends (charter). Both bear neither any relationship to the student need in the private school nor the far lower costs of educating students in charter schools. But even if you used some calculus based on student need where the student was going to attend, the amount will always be inaccurate because it will be an average of what an average student needs in a charter school or private school. So either too much or too little revenue "follows" the student to the school choice option. And currently, more often than not, far more state money flows to the choice option than the student would have received in the local public school they're leaving. Which, again, means that local revenue has to backfill the additional state revenue lost. This is something that not just I believe, it is something everyone who seriously examines our school choice funding acknowledges as a fact.

You get the point.

When I went through the public schools, thousands of families who didn't have kids in the schools paid for my education. And when my kids are no longer in the schools, I will pay that forward so other generations can be educated. The whole idea that "I shouldn't have to pay for schools unless my kids are in them" idea has been the biggest concern for me. Because if we continue to think like that, I fear for the complete collapse of our Social Contract that has made this the world's greatest economic superpower since World War II.

Private Schools are Better
There is just little evidence this is true, on the whole. Of course there are great private schools, just like there are great public ones. But both nationally and in Ohio, overall, especially controlling for poverty, public schools just perform better on state tests. In 8 of 10 Ohio school districts where private voucher providers reside, the school district outperforms the private option by an average of 27 percentage points. When privates outperform districts, it's in 2 of 10 cases and by only 9 percentage points. Again, there are caveats. Not every private school student is tested in Ohio, and it's only based on a single metric that's comparable between publics and privates. But the data indicate the private-is-better-than-public claim just isn't so, or is at least a lot more complicated than a slogan.

Overall, there have been good discussions on both sides about this issue. However, the simple acknowledgement that these issues I've discusssed are actual facts will help the legislature more effectively deal with the issue. Operating with a false set of facts will simply get us a bad solution. And no one -- neither kids in public nor private schools -- should have to deal with that.