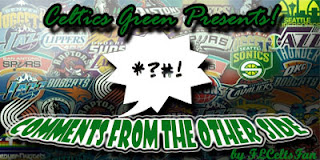 Talk about delusional and hot takes,  Bulls fans are right there.  Last time I did these comments, they were all ready to dump LaVine.  Now, he's better than Harden.  I remember when Rondo played for the Celtics and Rose was a Bull,  they hated Rondo with a passion and half the comments were how Rose was better than Rondo.  Then they signed Rondo and suddenly Rondo was always better than Rose.  Now, they have a Tatum hatred and Lauri is better than Tatum.  Give them a month or so and Lauri and LaVine will go back to being on their bad list.  The Celtics sleep walked through that game.  Not a lot of fight or effort.  And Brad Stevens did little to reel them in.  They should have fed Tatum when he had the hot hand and they went away from him.   Way too much hero ball and Kyrie seemed to be allergic to playing defense.  These days, when it is a lottery team,  the Celtics are sure to put up little fight.   Put this waaaayyy behind them and on to the next.  My favorites are in bold.  What are yours?

I want Lauri to absolutely murder Tatum at the rim tonight.

That wasn't ever a question. Lauri was always better.

If the word ' entitlement' was a city, it would be Boston

I'm gonna hit some beers and get rowdy for this one. I can't help but get a little belligerent when Boston is involved. Don't let me down, Bulls!

Celtics lost a super close game in Milwaukee on Thursday, I'm expecting them to stomp us.

Bulls only 4 games back of the Hawks. Lets get a hard fought loss here. Best outcome for the season is the Bulls stay exactly where they are with a bunch of hard fought losses that they can build off next year.

That poor sucker? Celtics this year already making him cry. All that talent only to be dysfunctional.

Lauri v Tatum. Think we know who is better and that will be apparent tonight.

You're a Bulls fan and yet think Tatum is better?

Let’s see if the Bulls can overcome their coaching and start a good W streak!

I assume this thread will get onto the topic of Terry Rozier at some point tonight. Is there any real indication he'd leave Boston? C's certainly have seemed intent on keeping him around.

Tatum always goes prime MJ every time he plays us. I guess this is gonna be another blow out.

So far this is exactly how the "Mutiny Game" started. I hope it doesn't end the same way.

Welp. We're about to get humiliated

Pls don't let Tatun get a career high against us.

I hate the Celtics

Brad Stevens and his Celtics really hate us

Anybody catch Hayward playing Apex Legends with Dr Disrespect on Twitch the other day? I did not see that coming.

Love the Sonics vibe these Celtic jerseys have.

Someone else than Zach needs to start sinking those threes or we will get killed. Also need to close in to Celts ****ers so they don't get all those open looks.

Ok we have a lead this might not go completely terrible.

What is happening right now?! Is this real life?!

Jaylen Brown blows. Can you believe there was a thread today saying he can easily be an all star soon??

And people actually defended the claim that his floor is a very good starter.

Travel and a flop by brown smh

Lauri is taking advantage of every single mismatch.

This is the best day of my life

Let's show Kyrie where he should sign next year

LaVine's got aimbot or something

Why hadn't I heard that the Monstars had taken over the bodies of our bench??

The Celtics are mentally weak. Let's keep up the pressure and make them doubt themselves all the way to an early playoff exit.

Now let's beat Celtics by 30 pts for some small revenge from last december.

Omg our young core is murdering them.

Hayward might be having some trouble at basketball now, but he's really good at gaming.

He's getting paid $30M/year to destroy the Celtics finals chances for years to come. That's like my dream job lmao.

Bulls are the best team in the East.

Al is the one Celt i like, but would be nice if he'd suck against us..

**** THE CELTICS AND THEIR FANS

Well I mean, this is the team that the Bulls lost by 50 to...and the bench was out there for most of it. Explains increased energy if nothing else

We have entered the twilight zone

Bulls out there giving their pitch to Kyrie... “Join us, back up Archie and become a champ again”

For a guy named Smart he sure makes some boneheaded plays.

Kinda feel sorry for Hayward. He's a shell of his former self.

I expected him to have a rough year. I think next season will be a better gauge of where he is a player.

Wth is Boston doing? Playing with their main guys pretty much and losing to Bulls? Before the game I expected them to rest at least Kyrie and still win convincingly.

Still expect the C’s to win. But the Bulls just played a fun first half.

Zach Lavine has 19 by halftime, damn we got a young James harden up in here

If you want to see some next level toxicity, go no further than the game thread in the the Celtucs forum

The toxicity has seeped into the team as well if you believe the rumors.

Cs have had trouble against legit 7 footers for about 5 years now, theyve never addressed it.

The league will soon realize we're a real team now

We all know what Kyrie's thinking right now

Kyrie on this team would actually be amazing

Looks like Zach hates Boston as much as the rest of us.

my off season wish list is Terry rozier and Derrick rose.

Kyrie trying to bring back hand checking or what?

Is brown really killing us?

Jaylen Brown finally able to score now that its against scrubs. What a bust.

Celtics switched into Top Gear... Let's see can we respond to this increased intensity from them.

Someone oughta post the suicide hotline in there, help 'em out

Lauri spazzes out with any contact lmao, I love it He must have spent the Offseason training with Lebron to learn the art of the flop

Keep watching we need this L

ROFL Both of them are mediocre players. Ainge and the fanbase are overrating their young players big time. That team would be competing for lottery balls without Stevens.

Forget tanking for one night. I'm rooting for the Bulls to embarrass the Celtics and their mediocre future.

They said Zach was a young Kobe

Celtic fans were saying that about Tatum in their thread lmfao

It's too perfect, lauri and lavine all stars for Chicago all star 2020

Oh brown what are you doing

getting traded for Anthony davis

Half these Celtics gonna be pelicans next year

That's what happens when you're Eastern Conference royalty I guess

Yup. They are digging deep through the bag of excuses right now.

Take your starters out Brad.

Kyrie is just putting his head down and traveling into free throws.

I'm surprised Kyrie is still in the game tbh, I thought he would pack his bags to New York by now

Officials trying to will Boston back into this. Back to back awful awful calls.

Man I hate everyone on the celtics besides Horford and Irving

Kyrie won't be one for long ;)

Man, I can remember just recently everyone on this board wanting to trade Zach. Bulls fans are not the brightest, theyre just emotional.

Celtics complain too much

Why Celtics wont go away. This is just annoying.

They're trying to win a title, you don't win by going away before 48 minutes are up.

Hey Kyrie, this Bulls team would look good with you on it.

Kyrie is an amazing player, but he would be a terrible fit with Lauri and LaVine. We need a team player to fit with those two. I wouldn't complain, but I'd be very concerned with Kyrie holding the development of Lauri with his one-man show type of game.

Kyrie is such a damn ball hog. I'd hate playing with him. Celtics are better without him.

Thank god the Celtics didn't pick Lauri instead of Tatum

Celtics shouldn't have slept on the bulls

We got the #1 redraft prospect in Lauri. Showing whose boss against Tatum

Get ready for the reports of the Celtics locker room yelling at each other after tonight.

THANK YOU JIMMY BUTLER FOR DEMANDING A TRADE!!!!

Will we ever stop winning?

Just give us the championship already.

Incredible February after a shaky return from injury for Lauri. Great clutch shooting from him today

Would like to see him do it against a real team though. Anyone can beat up Boston

There aren’t too many young players I’d want to build a team around ahead of Lauri. I’ll take him over Tatum any day

Brad Stevens is looking seriously dicey now. Him and Luke Walton were meant to run this league but neither is looking overly convincing.

Did the Bulls just send Kyrie Irving out of Boston?

Do we have a brighter future than the Celtics? The question must be asked.