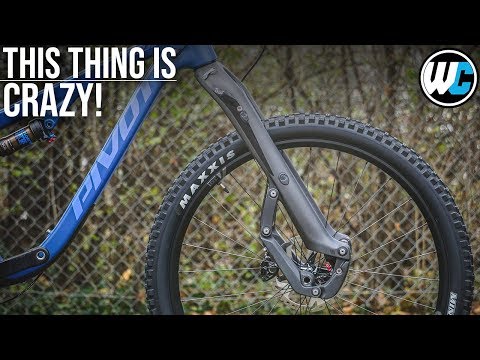 What a crazy looking fork. Trust The Message is the name. A brand new product from a new brand called Trust Performance. Trust has set out to redesign the way our forks work, and most notably look. Trust Performance was started by some huge names in the bike industry that have created some already mind-blowing products in their previous positions. Hap Seliga was one of the founders of Competitive Cyclist, Jason Schiers, one of the founders of Edge that later became ENVE, and the tech master, Dave Weagle, who has some of the best rear end suspension designs that the mountain bike industry has ever seen. When a group of industry leaders like this comes together to produce a product, it’s a big deal. Kind of like the USA’s basketball dream team, they are shooting for the top. What is the Trust Message Fork?

The Message is a trailing multi-link front suspension fork, or as some would call, a linkage fork. By having multiple links, engineers are able to control more aspects of the fork than the traditional style fork, also known as telescopic forks. Things like offset, travel, setup, and caster are all different and may affect more or less than before and we will dive much more into detail with all of those. Setting up this fork isn't much different than your normal fork in some ways. There are two air valves that you need to fill up, one on each fork leg. To start, the air pressure should equal your riding weight, which includes gear ready to rip some trails. From there, you are ready to set up your rebound and compression. For both rebound and your low-speed compression adjustment, count how many PSI you are below the maximum pressure of 300. For every 10 PSI under that number, give them one click each out from fully closed. Look for the chart below to make this simpler. For my setup at 150 PSI (I’m 150lbs), I need 15 clicks out from fully closed low-speed compression and rebound. This is just a starting point, but since this fork works so much differently than your normal fork, I would highly suggest riding these settings for a while. There are also your normal Open, Medium, and Firm modes. Since the fork has great support, I found I only really used Open or Firm. The firm setting was used only on steep road climbs to get somewhere, not at all in the dirt as the fork works so well. One piece of advice: DO NOT be fooled by doing the typical parking lot tests. It won’t feel quite right and there is a reason for this. It's made to take square edge bumps, things that come straight at the fork. One really cool test you can do once you have it set up is to push down on the fork like normal. You’ll notice it will feel kinda stiff. BUT if you put the front wheel against a curb or a wall, then push down with the same force, BOOM, super supple and the fork comes to life.

Our first impressions went from “This is weird” to “Damn, this is really good.”  We first set up The Message fork on an Evil The Following, where it stayed for a while.  We went by the book for setup. Yes, we did the push-down parking lot test and both Jeff (Worldwide Cyclery founder) and I thought that there might be something wrong. We had a call planned with Jason of Trust Performance to discuss the fork.  After he went through setup, what we should feel and how we should not do what we just did, he suggested how we ought to perform our parking lot tests against a wall. Our perspective (and maybe even life) has changed with that information. Jason said that we really need to have an open mind when testing this fork and throw out any previously known facts about forks and how they should feel out the door. Shift the mindset and be open to how it performs.


Riding into curbs you immediately feel how great the Trust fork is at taking up small bumps and square edges. That is the most impressive and first thing we noticed, full speed into a curb and you barely feel it, totally taking the hit as designed. On our first trail ride, we knew about the square edge suppleness, but one thing that we also really liked was how supportive the fork was in corners and pumping on the trail. It really does a good job at staying up in the travel more so than your traditional fork, but then a square edge comes along and that support changes into small bump compliance that we’ve never experienced before.

There was one thing that we noticed about the fork that wasn't as great of an experience, which we are calling the slap down effect. When coming off a drop or jump, and landing back wheel first and then “slapping” down the front wheel, the fork comes off as being stiff. It doesn't give the same compliance as a normal fork does in this situation, as the fork is designed to take hits from the front, and this is kinda coming from the back of the fork. While in normal trail riding situation, this only happened once or twice, it is something to note. We found it happening more when doing the stupid tests of dropping off a 3-foot wall to flat, or down a stair set, nothing we would consider real trail riding. After our first impressions, we obviously wanted to get a lot more riding on the fork, in different conditions and different bikes. So I wanted to put it on my Evil Offering, as it calls for a 140-150mm fork and Trust has said it could work on a bike up to that size. It does drop the front end a bit as the axle to crown is only 130mm, so Trust suggests that you make up for the loss of handlebar height by raising the stack, so the bar doesn't also drop 10-20mm.

Taking the fork out to some of our steeper and chunkier trails, I noticed right away just how stiff the fork really is. It holds its line and tracks amazingly well. It almost feels twitchy since there is no flex and the wheel goes where you point it. While nobody, especially my featherweight self at 150lbs, can say a 36 is flexy, the Trust fork takes stiffness to another level. As I got on a few trails that day, I began to notice the imbalance between the front and back of the bike. With the rear end having 140mm of plush travel, the fork felt too supported in comparison, especially in pumping and cornering situations. The front to rear just didn't feel balanced on the Offering the way it did on the Following (20mm less travel). Along with the BB dropping and stack dropping with the Trust fork over my stock 150mm fork, it made the rear end feel too soft even though it was set up right for the bike and my weight. Putting it back on the Following, all that feeling went away and we could really feel how much the fork liked a certain bike travel range. We feel it’s best suited on bikes with 100-130mm rear travel and 120-140mm front travel. This is where the bike feels balanced and the support through the travel is equal. It really makes these short-mid travel bikes come alive and helps them perform at the top of their category, as the fork is stiffer, tracks better, has better square edge suppleness, and provides amazing traction in all situations.

After a full day of riding, you are fully used to the fork and can pay attention to the trail and riding at full speed. The huge difference is when you go back to the telescopic fork, and noticing how those handle. Once you are used to the Trust linkage fork, telescoping forks really drive home the point that the Trust fork can and does perform better. It’s especially true in those continuous square edge hits, and the copious amounts of support in corners. It's not something that makes you change how you ride forever, but it takes a few hours to adjust to the other fork, no matter which way you swap. As we gathered our thoughts on this fork, we found ourselves asking, “If cost was not a factor, would we ride this fork?” Our answer was yes because, given the right bike, the fork does an amazing job at what it is designed for. It eats square edges for breakfast, lunch, and dinner, and has some of the best mid stroke support and traction we have ever had on a 120-130mm bike and fork. It really does take those bikes up to their top level. It did win Pinkbike’s Innovation of the Year award and for good reason. It's different but works great. Along with that award, one of the top comments was asking if Dave Weagle hadn't brought this to market, would it have gained the same amount of attention? We are not sure, but that doesn't change the fact that DW did design this and bring it to market. We are stoked on the Trust Message fork and have them for demo at both our locations. We suggest you try one out and see if you too will Trust The Message.