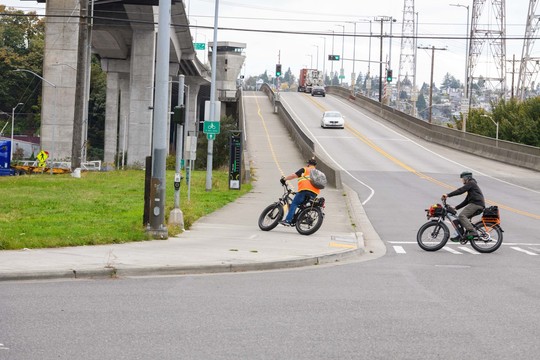 Every Monday, we’re posting a blog to keep you informed about our progress to stabilize the bridge, our efforts to address traffic and mobility, and other items related to the West Seattle High-Rise Bridge closure.

In this week’s update:

Phase I Stabilization Ends This Month

We’re close to concluding the emergency measures that we’ve been constructing since May to stabilize the bridge and prevent further cracking. These measures were necessary whether we chose to repair or replace the bridge. In the past week, we’ve continued to install carbon fiber wrapping and prepared to lower work platforms and remove temporary work structures. The work platforms will come down as soon as the week of December 21. Stabilization sets the stage for upcoming repairs of the West Seattle High-Rise Bridge.

Last month, we released the damaged bearings at Pier 18, located on the east side of the Duwamish Waterway. Pier 18’s neoprene lateral bearings were compressed and bulging, locking together two critical parts of the bridge that typically are independent of each other. The bearings were creating additional pressure and preventing the bridge from moving as it should.

Over the last two weeks, we finished pouring and curing the concrete that will hold the new lateral bearings in place. We then removed the temporary restraints to begin clearing the worksite. This weekend, we’ll remove the temporary work structures from Pier 18 to finalize our work.

We’re making progress on the last round of carbon fiber wrapping, and we’re on track to complete it by the end of next week. Carbon fiber wrapping helps support the now-stable and strengthened bridge. This is the last step in the stabilization project, and, once it’s done, we’ll lower work platforms.

As soon as the week of December 21, all work platforms will be lowered onto barges and temporary work structures will be removed. We’ll continue 24/7 monitoring and regular visual inspections after stabilization work is complete.

Kraemer North America, our contractor for the stabilization work, is working Monday through Saturday from 6 a.m. to 4:30 p.m. to stabilize the bridge. People driving may see lane reductions on Klickitat Ave SW and SW Klickitat Way (on the west and south sides of Harbor Island).

Check out our blog for information on the progress we’ve made since we closed the bridge in March.

Since last week, crews have been installing cameras for the automated photo enforcement system on the Low Bridge (Spokane St Bridge). When the photo enforcement system is activated in January 2021, these cameras will take pictures of vehicles’ license plates when they cross the Low Bridge between 5 a.m. and 9 p.m. each day, in either direction. Photos will be taken of the back of the vehicle only to record the license plate number and will not be taken of the person driving. The photos are prohibited from being used for any other law enforcement action. For more details, see this December 9 blog post.

On Wednesday, December 9, the Port of Seattle started conducting live load testing for the Terminal 5 (T5) bridge. Live load testing entails installing sensors on the bridge and running a truck (with a known weight and axle spacing) across the bridge. The information the Port receives from the sensors can be used to understand how the bridge responds to vehicle loads and ultimately to determine the bridge load rating.

Generally, we conduct live load testing to evaluate how weight is distributed along a bridge when a vehicle is on it. A bridge load rating helps us establish an accurate weight capacity for the bridge by current standards, which is important to keeping users safe and maximizing the lifespan of the bridge. Updated bridge load ratings are required for all Federal Highway Administration bridges by the end of 2022 to account for changes in the sizes and weights of vehicles seen on roadways over the years. Live load testing is the most appropriate method of determining that rating for this bridge. With this information, the Port of Seattle can determine appropriate usage and any potential next steps for the bridge.

The Port of Seattle is conducting this work with support from SDOT crews. It’s a routine part of bridge maintenance and has no correlation to the West Seattle High-Rise Bridge closure or the operations of the Low Bridge (SW Spokane Street Bridge).

When the forecast calls for freezing or near-freezing temperatures, as it did last Friday, our crews will be standing by in case roads need clearing. Please help keep workers and fellow travelers safe by slowing down, leaving extra space between vehicles, and giving yourself plenty of time and space to stop. You can brush up on other winter driving tips here, courtesy of the Washington State Department of Transportation.

A full recap of the December 2 West Seattle Bridge Community Task Force meeting is now available on the SDOT Blog. The Task Force met to discuss the decision to repair the West Seattle High Rise Bridge, learn about current and future bridge repair efforts, and discuss ongoing traffic mitigation efforts throughout the communities impacted by the bridge closure. The next Task Force meeting will be in January. We’ll send out more information once an exact date and time are decided.