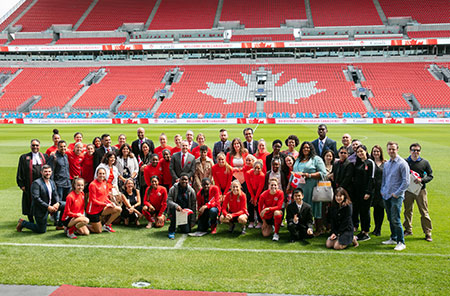 Earlier this month, Canada Soccer hosted a special citizenship ceremony at BMO Field in Toronto, where Canada’s Women’s National Team welcomed 27 new citizens from 12 countries into the Canadian family. The new Canadians and their guests were back on the field the very next day to see Canada score a win against Mexico in a women’s soccer friendly match.

The collaboration between Canada Soccer and Immigration, Refugees and Citizenship Canada complements the federal #ImmigrationMatters, an initiative which aims to demonstrate the benefits of immigration to Canadian communities and promote positive engagement between newcomers and citizens.

A citizenship ceremony is a significant milestone in the immigrant and settlement process for all of us immigrants. Taking the Oath of Citizenship at the ceremony is the final step to becoming a Canadian Citizen. It is a rite of passage that pinpoints the moment someone formally enters the Canadian family that we often remember for the rest of our lives.

Prof. William Jenkins from York University still recalls his citizenship ceremony from almost a decade ago: “The ceremony was memorable in that almost every region of the globe was represented. I felt very privileged to become a member of a national community in which a spirit of liberal values is mixed with a public ethos emphasizing mutual respect between Canada’s diverse cultural communities. It was also officiated by Lieutenant Governor of Ontario, Elizabeth Dowdeswell, an immigrant from the island of Ireland as myself.”

Hundreds of citizenship ceremonies are held across the country every year. Canada has welcomed over 1.7 million new citizens from all across the word over the last 10 years and more than 175,000 people in 2018 alone.

The value of sport in bringing communities together

Welcoming the 27 newest Canadians and delivering the oath of citizenship, Immigration Minister Ahmed Hussen spoke to the importance of Canada’s sporting culture in bringing diverse communities together. “Canada’s sporting culture has and continues to play a significant role in enriching the multicultural fabric of our country, where everyone can come together to watch a game and cheer Canada and their country of origin.”

Canada Soccer’s Peter Montopoli encouraged the newest citizens to follow the game: “Canada provides a welcoming, inclusive, and diverse society. Soccer celebrates cultures, encourages teamwork and collaboration, and provides a platform for everyone to come together under a common goal. We are proud to celebrate with these new Canadians as they become citizens of this welcoming nation and encourage them to participate in the beautiful game”.