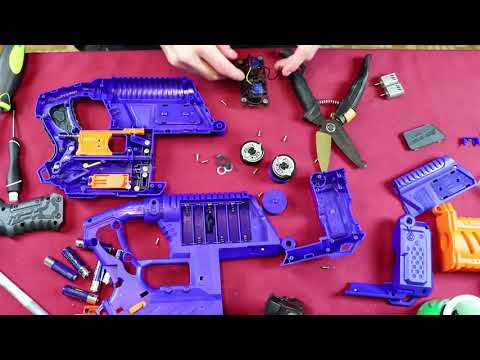 Adventure Force Double Trouble Mod (Not quite a guide)

After getting a project done (after sitting in pieces and various stages for two months), I ended up with better than expected results. As such, I’m spending a post tooting my own horn, as well as showing the potential of a late (but arguably one of the best) 2018 blaster release.

For the basics on modding the Adventure Force Double Trouble, I’ll simply link an existing guide from Lord Draconical, as I see no reason to retread the basics of how to modify the blaster. You’ll have to rewire the internals, and will need to either replace the existing on/off button with something more substantial, or use it to trigger a MOSFET or relay circuit.

Once you’re done with that, we can go over the things I did differently. 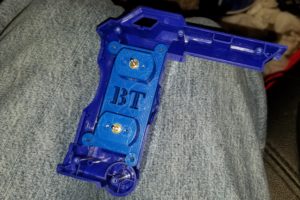 The Boomtendo cage, in place of the original. 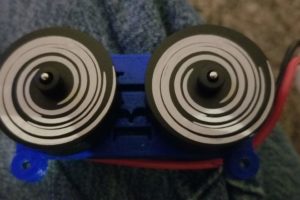 The current version of my magazine adapter.

The magazine adapter currently works with only stick magazines. Improved compatibility to come. 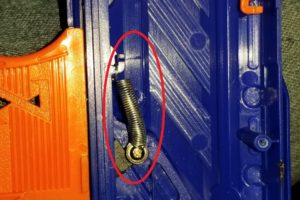 If using a magazine adapter, you'll need a stronger return spring. And you'll have to glue this joint into one solid piece.

There are a few incremental improvements to the blaster now available. Some of it due to myself, and some due to Boomtendo. We’ll start with his cage!

(LINK HERE) The cage was originally meant for the Commandfire, but both blasters use the same mounting posts. After a small adjustment, the cages now fit perfectly, and the 42.5mm option is best for foam darts. It also doesn’t have the orange “dart tab” as seen on the original cage, which is meant to keep kids from trying to fire anything other than standard darts.

Due to the wide shell, it’s very easy to install aftermarket 130 motors, even if you’re not the best at soldering.

(LINK HERE) I whipped this design up a while ago, with the main “unit” being printed as one piece, and an existing mag holder remixed and meant to be glued to it. It unfortunately only holds stick magazines – I will need to finally get around to redesigning it to accept drum magazines. Even so, the entire adapter is removable, so the user does not have to choose between magazines or the stock drums – you can use both! You’ll have to remove that orange dart tab if you kept the original cage, however.

Oh, and a video from initial testing of the adapter.

You will have to open up the blaster and glue a joint together on the pusher arm, however. The pusher arm is designed to “buckle” in place if it encounters excessive force (like a child trying to fire the blaster without batteries, and the dart getting stuck in the flywheels). This buckling also happens when using a magazine, due to the force of the follower spring. To solve this, a joint will need to be glued together (see picture). You will also need a stronger return spring. After that, you’ll be able to finally use magazines.

With the 42.5mm cage, Fangs Revamped, and Cyclone flywheels, I averaged 144fps out of the Double Trouble. The existing battery tray (normally holding 6 AA batteries) can easily accommodate a Lipo battery, although you’ll have to remove the various plastic ribs first.

The Double Trouble was one of the best releases of 2018, appearing on shelves for $20 right at the end of the holiday season. With a little work, it can also be a great superstock blaster, if for some reason 90+ fps out of the box isn’t enough for you.

The post Adventure Force Double Trouble Mod (Not quite a guide) appeared first on Blaster Hub.

Adventure Force Double Trouble Mod (Not quite a guide)